Where do your ideas come from?

Do you always know where your ideas came from? Or sometimes do you look at your work and wonder what gave you the idea?
I've just finished a flat needle felted piece I made for the Felting Forum's Monthly Challenge, using only natural fibres. I followed the first design I thought of, I just wanted something that was simple, but would look great with all the tones and textures of different animal fibres, so I just drew a few circles and wavy lines: 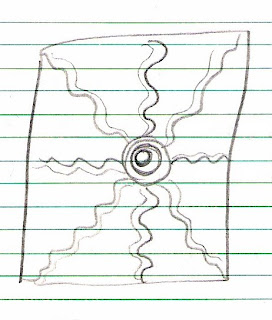 I actually stuck to my idea for once too: 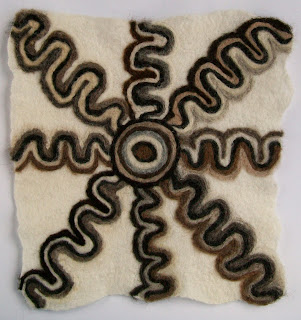 But when the pattern started to build up and fill in, it started to remind me of paintings I'd seen by Pintupi artists from Australia. So, I called the piece 'Pintupi' to acknowledge the influence and lasting impression those paintings must have made on me. 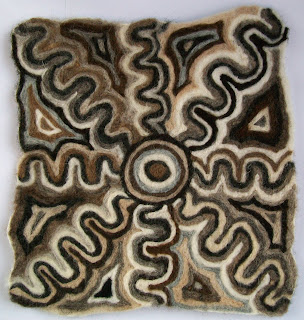 That's what got me thinking about where ideas come from, and I remembered a short clip from a Derren Brown TV programme where he turned the tables on advertisers to influence their ideas.

'Pintupi' was made using 37 different animal fibres (for a full list see the photo on flickr), some I'd bought myself, some were from fibre swaps, and some lovely handwashed and handcarded batts in gorgeous shades and tones from my friend Karen.

I had an idea a few weeks ago for making a foliage picture with felt. I was having a look through my tub of handmade yarn scraps, and noticed how good they looked where some cut plied ones were separating. I made some patchy green prefelt to cut up for the background, made some twists with merino/silk and merino/bamboo, and coiled some thin merino strands around paintbrushes.
It took SO long to lay out, I was glad when I'd finished: 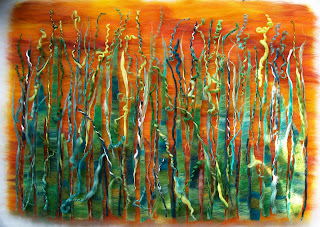 Felting it wasn't easy as it was so big, I had to lay a shower curtain down on the kitchen floor, and piece together bubblewrap and netting. It was looking good after rubbing and rolling though. 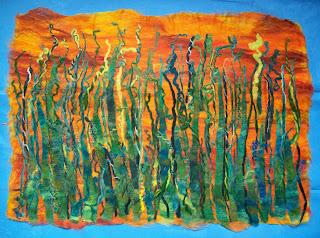 I finished the felting by rubbing on bubblewrap, bit by bit, in 'rows' across the felt, then I rotated it and did the same thing. I was a bit disappointed with the end result, I'd hoped it'd turn out more like the halfway stage, and all the prefelt, twists and yarns I'd added had made it really thick. It's growing on me now, though :) 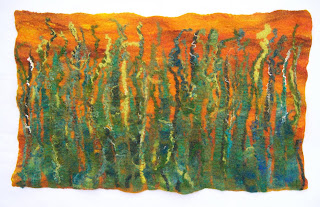 I had some prefelt and yarns leftover, so I made a few more twists, and tried another version on a blue background, this is a cropped version of it: 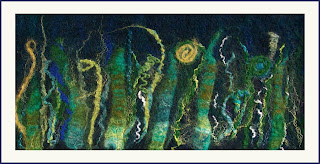