Sorry for not posting anything for a while. I think I've just had too many things going on at once, and I don't know about you, but when I've got so many things I need to do that I don't know where to start, I usually end up putting them off longer! One of the main things I've been working on is getting through my huge pile of WIPs. 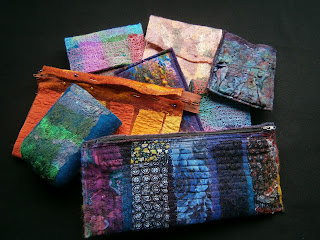 As part of my other fabrics and fibres project, I had lots of unfinished pieces waiting to be made into things...unfinished camera pouches, pencil cases, iPod cases, mirror cases, purses, glasses cases... not to mention lots of pieces of felt waiting to be cut and pinned and sewn to add to the pile :)

They are mostly finished now, and one of the biggest tasks was photographing them all. For a while I just had 2 cloths for photographing-a black piece and some natural calico, but after struggling to get a few photos right, my girlfriend suggested using neutral colours like a brown or grey, so it ended up being a mammoth task taking photographs of about 30 felt pieces on 4 different backgrounds, not to mention the fun of going through and deleting all but the best. At least now that Summer is over, the light is better and getting good shots is far easier :)

I even had time to make some felt just for fun recently, which was really nice. I probably went a bit over the top with all the different fibres I blended with the wool and all the different fabric and fibre embellishments I piled on the top, but it was nice to make something that wasn't controlled or being made with anything in mind for a change :) 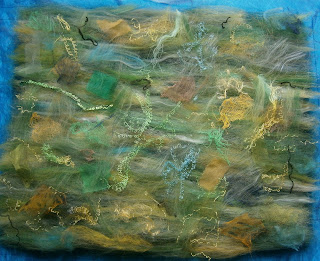 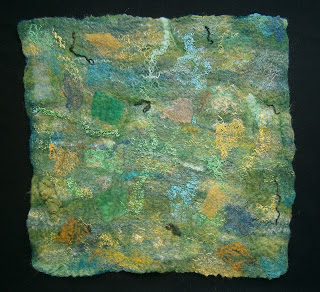 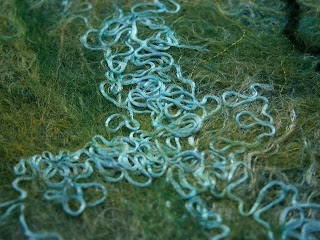 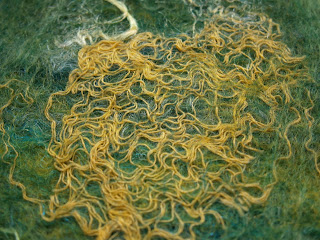 Have you been working on anything just for fun lately?
Posted by Zed at 14:14 7 comments: