I can't remember the last time I got a chance to do some felting, but I got chance again the Sunday before last, and I'd had the pieces laid out for at least a week and half. Two of the pieces were nuno samples. I'd bought some scarves and wanted to see how the fabric felted. For both samples, I laid out two layers of Merino tops and laid the fabric on top. The first scarf I tried didn't have a label on it, it felt like a synthetic chiffon, slightly 'rough'. It felted quite nicely, though there were a couple of places along the edges where it didn't attach securely. 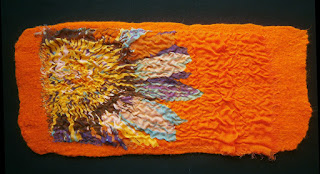 The nuno texture was really nice: 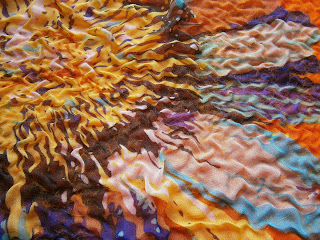 The next piece I tried was viscose, it was really soft. It looked like crepe after felting: 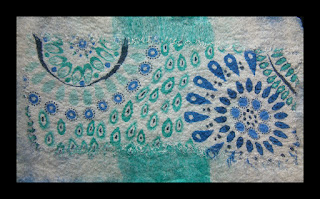 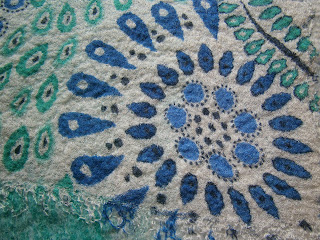 A supermacro close up, I think I got the colours matched pretty well :) 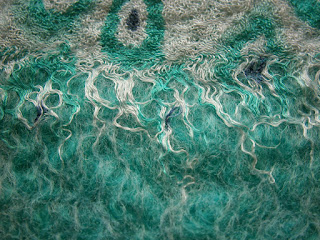 Another piece I made was with Stone Sheep wool. I first tried this last month, probably the previous time I did some felting. I liked the way it felted and how fast it felted so thought it'd be really good for something I wanted to try out. I laid out a couple of layers of some carded Stone sheep wool, then added a big pile of fake Angora fibre in the centre. I covered it with a circular resist, covered the resist with some 'Silk Schappe' that I got from wollknoll (it seems like carded silk noil), then added another couple of layers of Stone sheep wool. I finished it off with some kapok fibre. When it was felted, I snipped a little hole to take the resist out and worked it until I got it how I wanted. 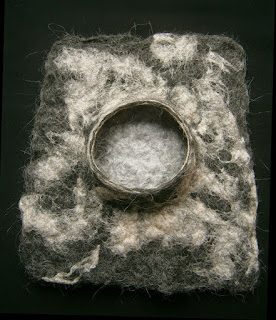 I thought the fake Angora might be a bit fluffier and looser than this, I mustn't have piled quite enough in! 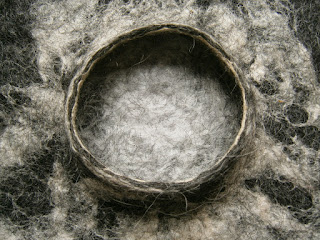 You can see the Silk schappe from this angle: 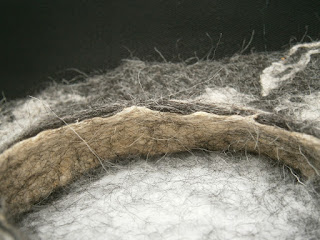 The Felting and Fiber Studio's next "Wet Felting for Beginners" online workshop will start on Friday June 19th. It’s a 3 week course developed to give absolute beginners a good foundation on which to develop their wet felting skills. Not only are there the expected ‘How to Felt’ instructions, but there are also simple exercises designed to show what happens when wool felts under different conditions so you can control the outcome. There is also lots of info on using different types of wool and animal fibres, tips for inexpensive tools, alternate techniques etc. For more info on the course, have a look here: http://feltingandfiberstudio.com/classes/wet-felting-for-beginners/ There is all the information you need, including what 'equipment' and supplies you'll need and there's also a link to a simplified supplies list. 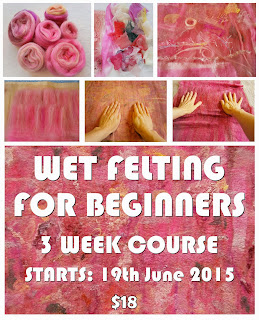 If you'd like to sign up for the course, please use the Contact form at the bottom of the Class information page. There are some prices in different currencies listed there too. Don't forget to include your PayPal email address in the specified field. Once payment is received, you will receive an email with all the information you'll need.

Our first class was really successful, if you'd like to read testimonials from some of the students, please have a look on our main Online Classes information page: http://feltingandfiberstudio.com/classes/  You can also have a look at some of the work produced by students on the gallery page: http://feltingandfiberstudio.com/classes/wet-felting-for-beginners/wet-felting-for-beginners-student-gallery/

Please feel free to contact us if you have any questions, or if you are interested in teaching a course or workshop yourself, we have everything in place for you to host your own online workshop on a secure site.