I thought I'd make a big piece of nuno felt, with plans to make it into a book cover. I recently got a big bag of Botany Lap waste from World of Wool with some nice blues and purples slightly different to the ones I already had so I thought a patchwork of colours with a collage of silk pieces would work great. I noticed quite early on it didn't seem to be felting the 'usual' way, but put it down to starting on the back, which I don't usually do, but had wanted to make sure there were no thin edges, so I'd flipped it over. And I wondered if I'd overwet it a bit too. Then some bits of silk came right off, which did seem very odd, as I've been using bits of these same silk scarves for years. I thought that one of the 'waste' wool tops I'd used mustn't have been Merino, it did feel a bit 'rougher', but sometimes they can do if they're a bit old or some colours seem a bit drier too. It wasn't vastly different so I guessed it might be Corriedale. When it came to fulling, it all got really weird. I know different wool breeds and wool amounts, and using fabrics etc affects shrinkage, so when I make patchy and/or nuno pieces, I don't expect it to be as neat and 'square' as simpler pieces, but this was all over the place. This is the finished piece now it's dry: 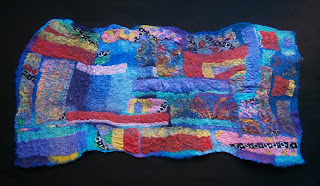 When I'd flipped it over during the fulling, when the distortion became more pronounced, I suddenly went 'Aaah!' as I realised. This is the back: 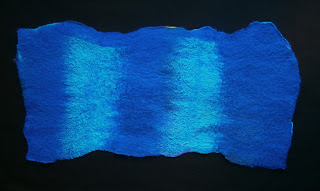 It seemed obvious then that not only was one of the 'waste' wool tops possibly not Merino (the mid blue), but the turquoisey one was probably not 100% Merino, either. It felt soft, but then some colours do seem softer, and it wasn't obvious looking at it that it was blended with anything. I did a burn test and it burnt the same as some Merino, but some of the close up photos I took made it look quite synthetic. It reminded me of the fake Angora fibre I have. 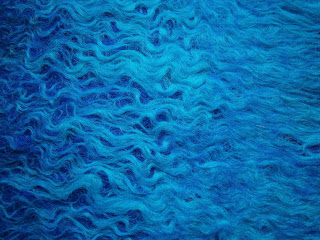 When I looked at the places where the silk hadn't attached fully and where it had come off altogther, it was where I'd used the soft lap waste tops both on top and underneath. This is one piece which really tried to hang on : 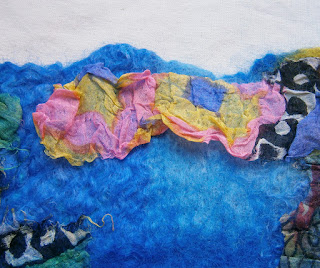 Where I'd used the two different types together, I did get an interesting texture on the Silk. This is the vertical purple/lilac strip on the right hand side: 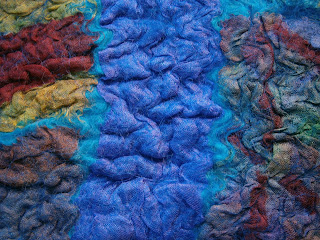 And you can see in the photo of the whole piece how that silk strip changes about a quarter of the way down, with different wools. I think I'll keep all these together so I know to expect unusual results, maybe use them for experiments. The only real problem they caused was where the softer tops, possibly blends, were in two layers, and the silk had come off, the felt was cobwebby in those places. (not a great photo, but you get the idea!) 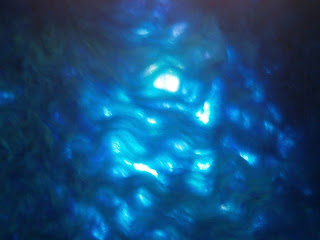 One piece which did turn out how I expected was a new coaster I made using some woven pencil roving waste which had been gathering dust for months (I flipped it over, just in case). I did almost use some Botany Lap Waste tops, but changed my mind at the last minute: 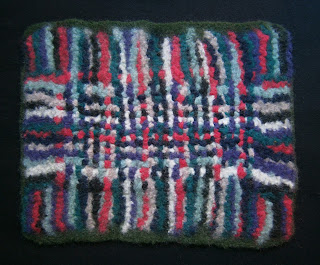 I think the colours and rippling give the illusion it's bumpier than it is. You can feel texture on the surface, but it's subtler than it looks: 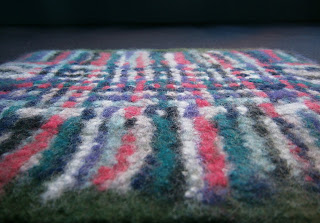 Have you had any unexpected results or surprises using unknown wools or fibres?
Posted by Zed at 19:03 2 comments: