Before the black Merino and multi fibre notebook cover I made recently, I'd started to make a greeny blue one for a diary. The first batt I was happy with on my drum carder was blues and greens so I used this for the top layer. As well as Merino, I added some texturey Icelandic wool, and locks of Bluefaced Leicester and Wensleydale that I dyed a few years. I added lots of surface embellishments: silk fabric, cotton gauze, organza, silk top, silk throwster's waste, some synthetic curly fibres and some more of the dyed texturey, curly wools. 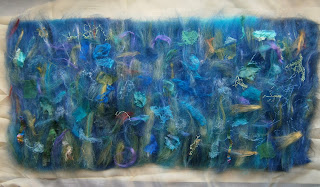 It was too large to get a decent clear 'after felting' photo, but this is almost all of it: 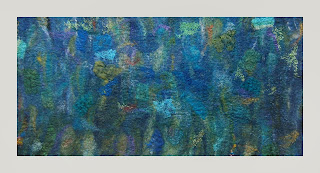 This notebook took even longer than the black one as it was the first one I'd made like this, using felt off cuts for the straps and hand sewing all around the edges: 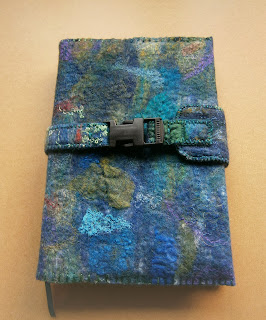 I machine stitched the smaller strip onto the wide closure strip. 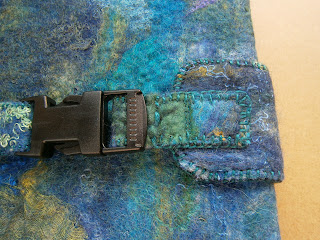 And I machine stitched the two pieces onto the back. 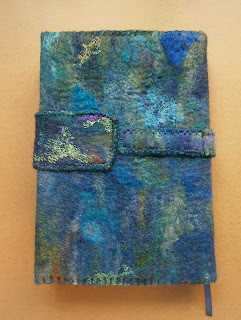 But I finished all the edges with blanket stitch. 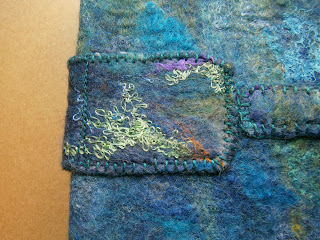 I kept the natural edge of the felt for the inside front flap, I like the little detail of pink and yellow on the silk at the top. 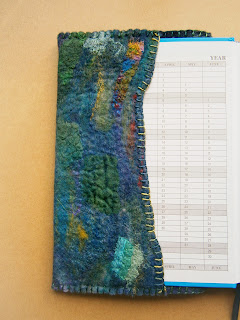 I thought I'd make myself a cover for a ring binder notebook I've started using for notes about batts, fibre packs and etsy listings. I made a piece of felt a few weeks ago from merino and embellishment fibre blends. I used lots of different fibres: Milk Protein fibre, Hemp, Flax, Ramie, Banana, Bamboo top and fibre; Viscose top and fibre, Trilobal nylon, Acrlic laps, Plastic fibre and Egyptian cotton. This is the whole piece after felting:

I recently made another notebook and made the straps to go through the Delrin clips from felt, and it looked really nice, so I thought I'd do the same for this one. This is the front: 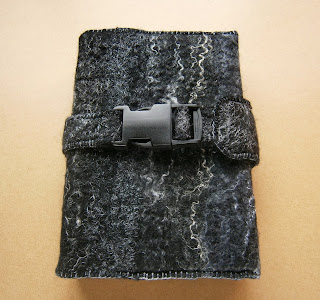 It took hours to sew (at least 9 episodes of Hawaii Five - 0!) because I machine stitched the straps into place on the back, but hand sewed everything else and finished off the edges with blanket stitch. 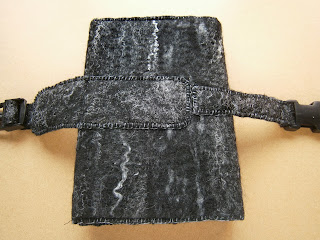 I left the natural felt edge for the front inside flap. 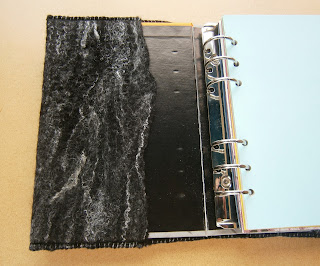 I cut the back flap to size and used the offcuts for the straps. 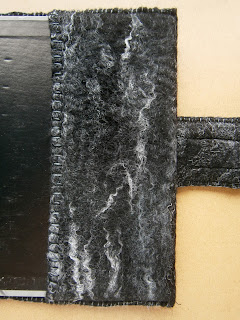 At least once a year I've contemplated buying myself a drum carder. But after seeing the wool blends Ann from the Felting and Fiber Studio carded a few weeks ago, I seriously considered it, and after looking at a link Judith gave me to ebay, I bought myself a gorgeous handmade Ash drum carder from the Classic Carder company. I wasn't very good on my first few tries, but I soon got the hang of it :) 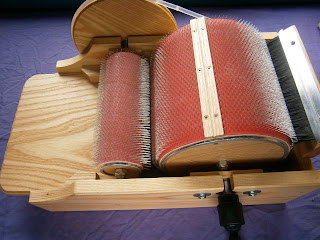 I thought I should have an 'aim' instead of just going mad and making lots of nice coloured batts, so I decided to  work out roughly how much wool I'd need for one layer if I'm making a piece of felt big enough to make a cover for an A6 notebook. I got my template out, chose a coppery bronze colour theme and then laid out the different coloured wools in different proportions. 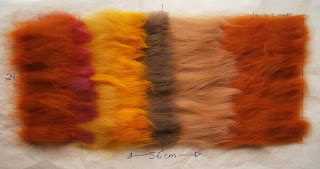 I then gathered all the colours up, weighed them and kept notes. I'd usually think to do this after the fifth time of laying out colours, so I'm impressed with myself :) 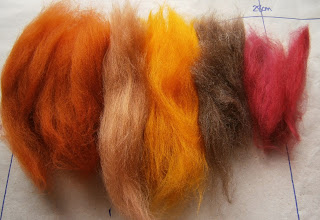 I added some small amounts of flax and soy top to a couple of the lighter colours, and it's not obvious from the photo, but I added black bamboo to the natural brown merino. 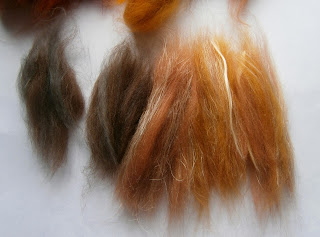 I was impressed with how it looked after just one turn through the carder, but I wanted it more subtle than it had turned out, so I put the wool through again. I really like how it turned out the second time. 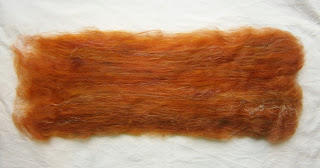 I've been thinking for a long time about making up 'experimental' or 'inspiration' fibre packs to sell on etsy. Working out what to put in there to make it worthwhile with our postage prices was difficult, but Marilyn recently suggested selling wool aswell to make it more of a kit. I had a think about how to do it and came up with the idea of including just enough wool to do one layer, a nice blend for the top. I thought this batt would be perfect for the first one as it's the same colours I used for my coppery bronze piece that so many people liked. It gave me an excuse to get out my favourite shades of organza too. 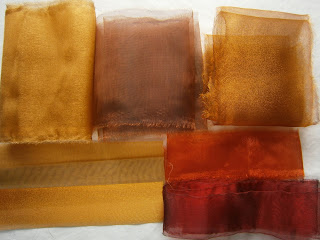 I measured and weighed the organza, picked out some matching cotton gauze, novelty art yarns and silk throwster's waste like I used on my coppery piece, and also made another little batt to make sure there was enough. But now after lots of weighing and measuring, the pack is finished. I did more maths than anyone should do in a year working out roughly how much organza, gauze, yarn and silk is used on a heavily embellished felt piece :)  I just finished writing the description and added it to my etsy shop. 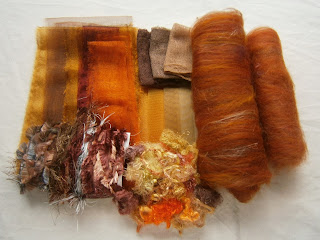 Let me know what you think of it, is it a good selection of fabrics and fibers? 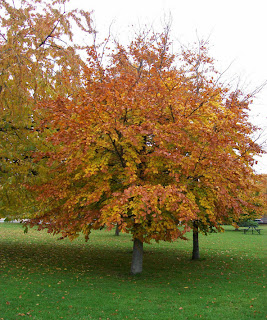 If you'd like to join in with the 4th Quarter Studio Challenge, have a look at this post for the theme and details of how to share your pictures.
Posted by Zed at 16:48 No comments: