Over on The Felting and Fiber Studio we have Quarterly Challenges. The First Quarter Challenge was from Ruth, it was a Fauvism Challenge. I was late getting mine done, and if you want to see some of the other brilliant entries, you can do here. I kept changing my mind about what I wanted to do, I thought I had finally made my mind up, but then looked at other entries and remembered a felt picture I made from a photo my sister took. You might remember it: http://feltbyzed.blogspot.co.uk/2015/08/felt-picture.html 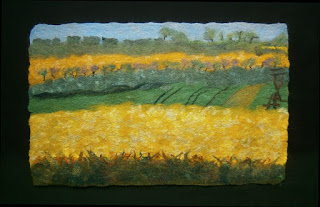 I took the original photo (without permission!) and altered the colours in Photoshop: 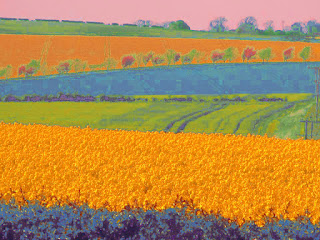 I'd had in my head that Fauvism was really bright, but the more I looked, the more I saw muted colours, unsaturated shades. There's one particular jade green that I started to see everywhere! I simplified the picture to get the colour bands: 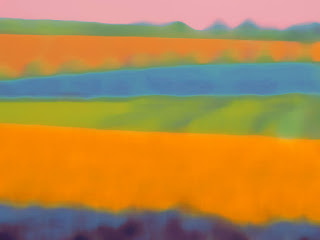 And added some 'accented edges': 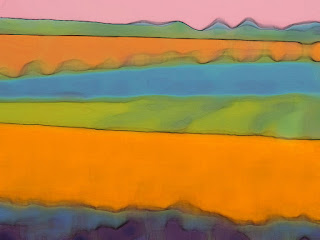 Then I blended the last one and first one together: 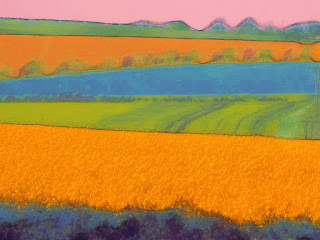 A lot of the Fauvist paintings had roughly blended brush strokes and patchy areas so I blended some colours for each band to try to get that effect: 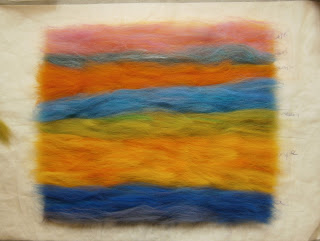 I don't know which photo shows it better: 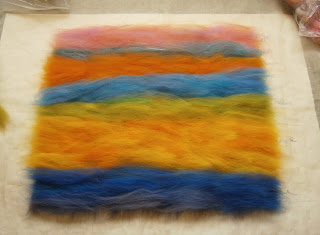 Then I added embellishment fibres for more effect, this is some Kapok on the pink, there's a bit of silk on the blue, trilobal nylon on the orange, and nylon staple on the blue: 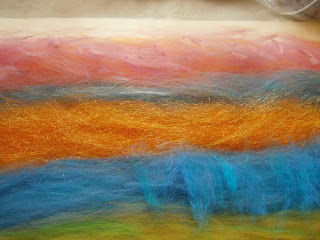 I don't know why I did that second band blue, I can see it's green on the photo, I clearly wrote 'green' on my template, and somehow chose blue! Maybe I tilted my laptop screen back too far (good excuse!) I did realise before felting and changed it: 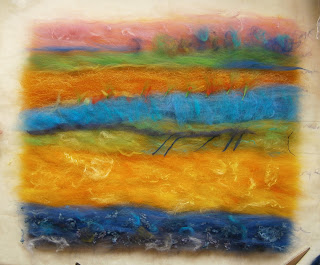 The other embellishments and fibres I added are: some dark blue wool and light blue nylon for trees at the top; some green wool and red nylon for trees between the top orange row and blue one underneath it; green and yellow viscose staple on the green layer and some dark blue nylon for a hedge. The track lines are wool; I used viscose and nylon on the lower orangey band, and the blue/purple band at the bottom has dyed cotton nepps and nylon staple fibre added. This angle might show them a bit better: 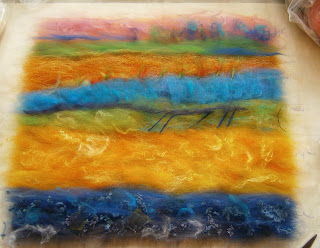 I was quite disapointed when I looked at it, still wet, pegged on the washing line to dry, it looked so dull and flat: 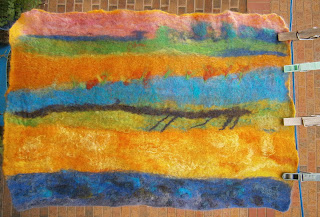 It looked a lot better when it was dry, but I put lots of detail in the original one, so it still looks dull in comparison. If I ever get brave enough, I'll try some free motion stitching on it! 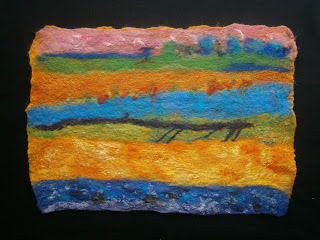