I feel bad for neglecting my blog, but I really haven't had the time to do anything but work on my Fimo tutorial lately. I didn't think that would make a very long or interesting post so I thought I'd do one about what goes into writing tutorials or e-books. Looking at a really good one, you'd be forgiven for thinking that it's pretty much just getting someone to take photos while you go through the stages, or at the most, stopping to take photos if you're doing it alone. Then just adding some text to the photos in Word. Ah, if only it was that simple :)  Sometimes the shorter ones can be straightforward if it all goes well, but even then there is usally lots of photo editing,  cropping, resizing, etc. and rewrites of the text.
So, what does happen? Well we probably all do it a little differently, but usually I start off with a rough idea, a few things jotted down, then write a brief outline of what I want to include. 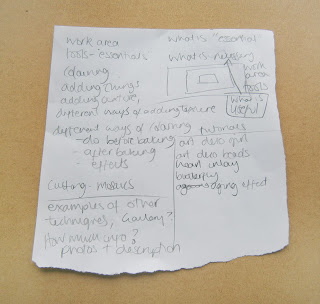 I'll type this out onto Wordpad, then start to give it more definition, separate it into sections then add info about the content I want in each section. I usually do a copy of this new outline with a list of all the photos I need to take for it or sets of photos, then print it out and start on the photos. 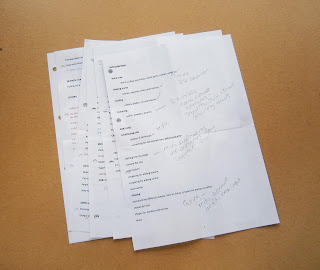 I'll probably re-print the list quite a few times as I work through it and change my ideas. I like to keep a notebook close by when I take photos because I usually end up with ideas for something else I need to include or an idea that will help make another set work better. Also it's good to take notes about what you're doing in the photo and at certain stages because it will help to explain the process more clearly. 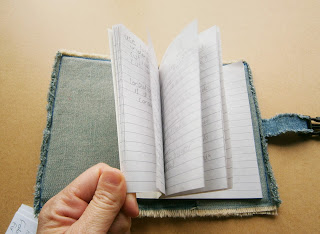 Even when I'm not actually working on the tutorial, something will pop into my head, so I usually end up with lots of loose pieces of paper with little notes on. It's like one idea inspires others and you can't see how you can leave something out without it seeming incomplete. I thought from the original idea for my Fimo tutorial it would be several pages long and just take a few days to do with careful planning, but by the time I wrote down my outline it was already turning into a mini e-book! 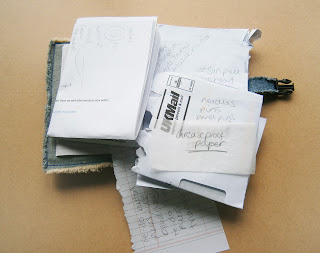 Once all the photos have been taken, the most laborious part I find, is going through all the photos...deleting blurry ones first then going back and looking through the rest carefully to choose the final ones. And if you've ever taken photos of felt or fibre, you'll know it usually takes a lot of photos to get the one good shot you need :) I then usually make duplicate folders for resizing. It isn't unusual for me to have 4 duplicate sets all at different sizes.

When it comes to the writing, I usually start by simply describing the process trying not to overthink it, and use the photos to illustrate this. Then I pester my girlfriend to read it through for me, it's really good to get the opinion of someone who hasn't tried what your tutorial is about, they can ask all the questions you need to answer but might have missed. Once the first draft is finished, I'll probably ask Ann, Ruth and Karen from the studio site and Lyn from rosiepink to read through too, it's good to make sure it's understandable to people all over, and that there aren't any words or phrases that are unfamiliar. It's strange the words we take for granted that are often questioned. Once I'm happy with all the words and pictures, I work on the layout. That's where the duplicate sets of photos come in, if a photos used in the tutorial only needs to be small and doesn't show any detail, using photos of smaller dimensions and file size can reduce the overall file size of the document and subsequent PDF.

I'm just past the first draft stage of my Fimo tutorial and ready to start work on polishing the words and working on the layout. I keep getting more ideas for things to include though! 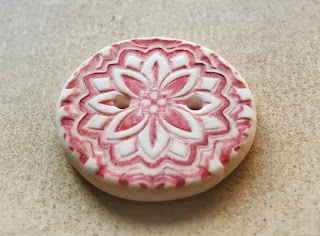 I mentioned in my last post that I'd started working on a Fimo tutorial. I thought I'd have it finished now, but it hasn't been as easy as I thought. After all the nice cloudy stormy days that weren't great for photos we've had about 2 weeks of non stop sunshine, and when I say non stop, I mean about 17 very long, hot hours a day :( I never have much luck with photos at this time of year as it is, the light isn't sharp like in winter, but for some reason it seems even softer than usual. I ended up re-doing my photos about 4 times.

Then my computer died. It temporarily revived for a few days and I managed to copy all my photos onto dvds. I'd started on the editing when it died for good about a week ago. I managed to borrow a computer for a few days, so I did manage to organise the  2,000+ photos into folders and start sorting through them at least. I set my new computer up over the weekend, took about 2 days to find out where things are hidden (Windows 8, I thought Vista was bad!) and made a start on writing the tutorial and lightening and cropping the final photos. I have the intro and first part done now. Only about 7 more parts to go!

This was the piece I showed part of last time, that I dropped the camera on, it has been baked. 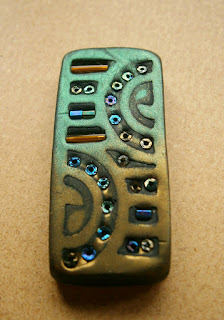 I had some spare pieces of clay left over from the demonstration pieces so I had a play around and made a few things just for myself. This is a pendant, it's resting on a glass pebble to catch the light. 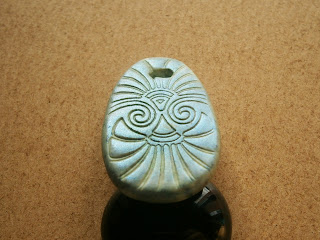 I used some of the leftover pieces together to make multi coloured pieces, this is a heart shaped button. 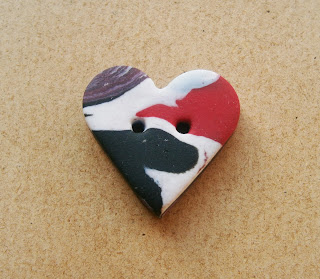 I made quite a few buttons, you never know when you might need one, I might have to do a few more though, I have a pile of purses that would look good with buttons made to match. 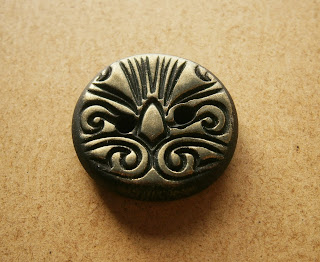 What projects have you been working on lately?
Posted by Zed at 11:41 2 comments: