I've been trying to find ways of having a few projects on the go so I can work on them for a few minutes at a time where possible. A few months ago, I posted on the Felting and Fiber Studio site about a couple of felt pieces I'd made with the intention of practising stitches for the Take A Stitch Tuesday challenge. I didn't keep up with the challenge, so had the pieces spare. I decided to add some stitching to the first piece. This is how it looked originally. I started by machine stitching around the patches of colour. 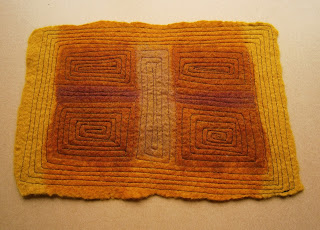 Over the next couple of days, I added some hand stitched straight stitches, first in in yellow and then added some in orange. 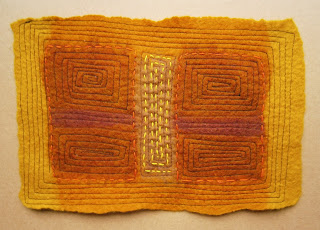 Another project I got started on this week is a white texture felt piece. Liz from That Fuzzy Feeling blog, recently made a gorgeous piece of texture felt and it inspired me to make one. I decided to make a natural white one, so I got to play with (and smell!) my collection of wool, alpaca and mohair locks. They are mostly unwashed so my hands felt really nice afterwards. 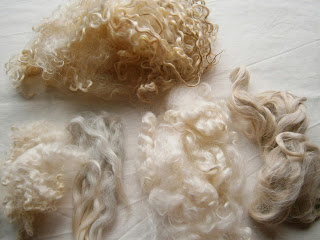 The first day I managed to get as far as laying it out and sewing up around the edges. So far, I've managed to add the stitches from the top to the bottom. 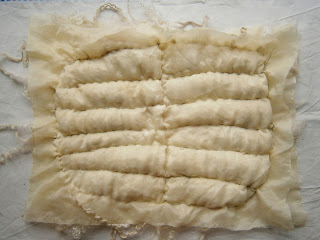 Thanks to Ruth for encouraging us to find ways to fit in a few minutes of fibre time each day, I've managed to get a lot more done this week than I otherwise would have. It might not be much each day, but before long, it all adds up to finished projects I wouldn't have had without the challenge :)  Ruth's been blogging about her Daily Dose of Fibre, check out her blog for her gorgeous bead books, stitched fused fabric, and more.
Posted by Zed at 14:16 4 comments:

I’ve been trying hard with Ruth’s Daily Dose of Fiber challenge, but so far that mostly consists of me rewriting the same list each day :)    I have managed to complete a few projects recently though. The first one was a small shoulder bag I started a while ago when I was using my felt offcuts. I think these kinds of bags are known as ‘passport bags’, it’s big enough to fit a camera and coin purse in. I had some nice fabric that I salvaged from a worn out camera bag, so I used this on the inside flap. It might look familiar because I took photos of the magnetic closures for a post not so long ago. 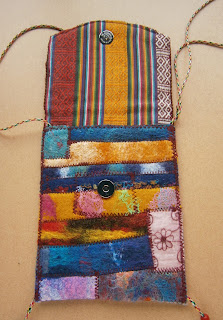 I covered over the tops of the magnetic closures with felt--craft felt on the inside and a nuno felt offcut for the front, before sewing the sides together--that’s usually something I’d forget to do! 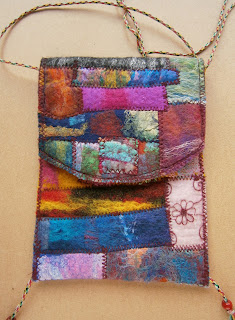 Once it was all sewn up, I finished around the edges with blanket stitch in the same maroon colour I’d used for sewing. Another project I finished recently was a felt placemat. I made the felt sometime last year and used a piece to make a mirror case, and cut out the placemat, but I never got around to blanket stitching the edges, so one day last week when there was about 30 minutes of light, I finished it off. 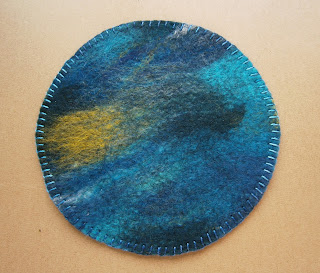 The last project I managed to complete this week was a set of two coasters for by the kettle. I used a plain piece of felt and cut an 11 x 7 inch rectangle, and a square roughly 6 x 6 inches. I zig-zag stitched around the edges then did random straight stitching, first one way, then the other. This thickened up the felt and because I wasn’t aiming for neatness, I didn’t need to concentrate hard or strain my eyes :) 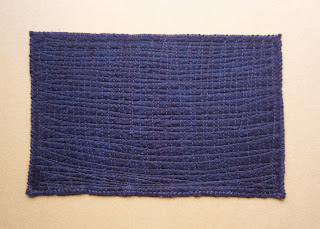 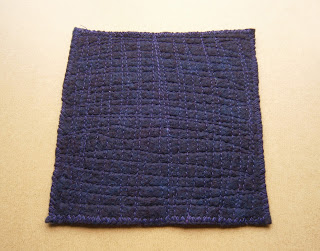 My next project is to do a wool and fibre inventory. What have you been working on lately? Have you finished any projects you had waiting for a while? Do you have a list of things you want to work on?

On the Felting and Fiber Studio Site a few months ago, Karen Challenged us to make something depicting our weather. I didn't have chance to felt mine until New Year's day, but I took lots of photos and started looking at them and thinking how I could try to capture them in felt. I also started to make up some blends of wool and fibres to capture the colours and tones.

I didn't want to try to recreate any of the photos, just try to capture the feeling of the ever changing sky and clouds. This first piece is based on some of the sunsets here recently, they haven't been as deep or spectacular as usual, probably because it's been wet, dark and warm instead of bright and cold, but sometimes there's a little hint of peachey copper. 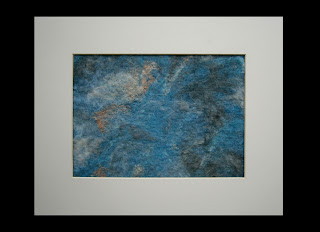 This is a close up of the coppery silk throwster's waste: 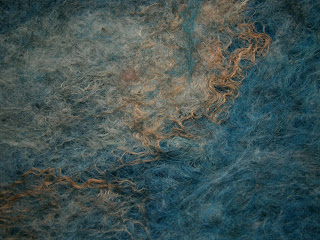 This next piece is based on the thick white and grey cloudy days; billowing, rolling clouds, subtley changing as they grow and float past. It is made from lots of different natural white and light grey wools blended with flax, soy fibre and bamboo for soft golden highlights. The locks are Gotland and Mohair and Bluefaced Leicester. 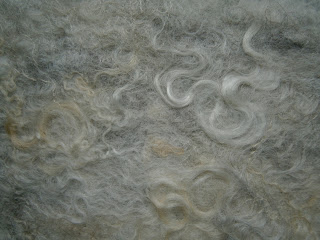 I love days when we get huge swirling black and grey clouds, constantly changing as they storm through the sky. These next two pieces are part of a larger one inspired by dark, cloudy days. I used carded Gotland wool for the background and laid raw Gotland locks in shades from light grey to black on top for the rolling clouds. 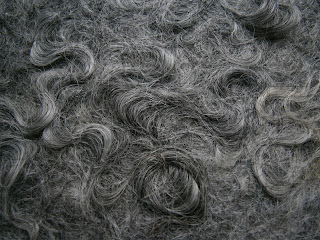 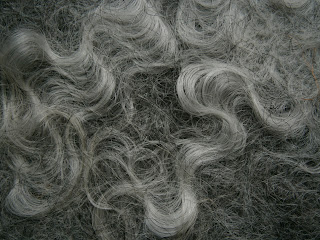 This last piece wasn't based on a photo I took or anything I saw out of the window, but it was inspired by many photos of the effects of the torrential rain we've had in the UK over the past 3 months (or last 9 really). A lot of the photos haven't been pretty; muddy brown water waist deep, roads and pavements broken, whole rows of houses collapsed...but there have beeen some spectacular ones of stormy, cloudy skies and stormy seas, raging rivers, and some great ones of large stormy clouds in bright blue skies reflected on miles of  flooded fields. I wish I'd downloaded the photos, but I'm not sure I could post them without infringeing copyright. This last piece is probably my favourite. 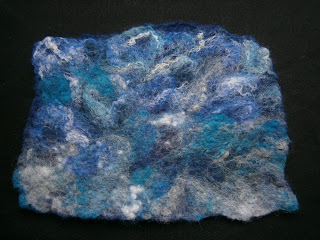