A few weeks ago, I decided to dye some wool and fibres. I used up quite a lot of my dyed texturey wools when making batts recently, so I wanted to to restock those and thought I'd do a few fibres while i was making a mess. I ended up having to do it over three days, and it made a right mess, but it was worth it in the end :) I bought some white Kent Romney lambswool to try for adding texture, I had a little bit of scoured Falkland fleece left over too so added that: 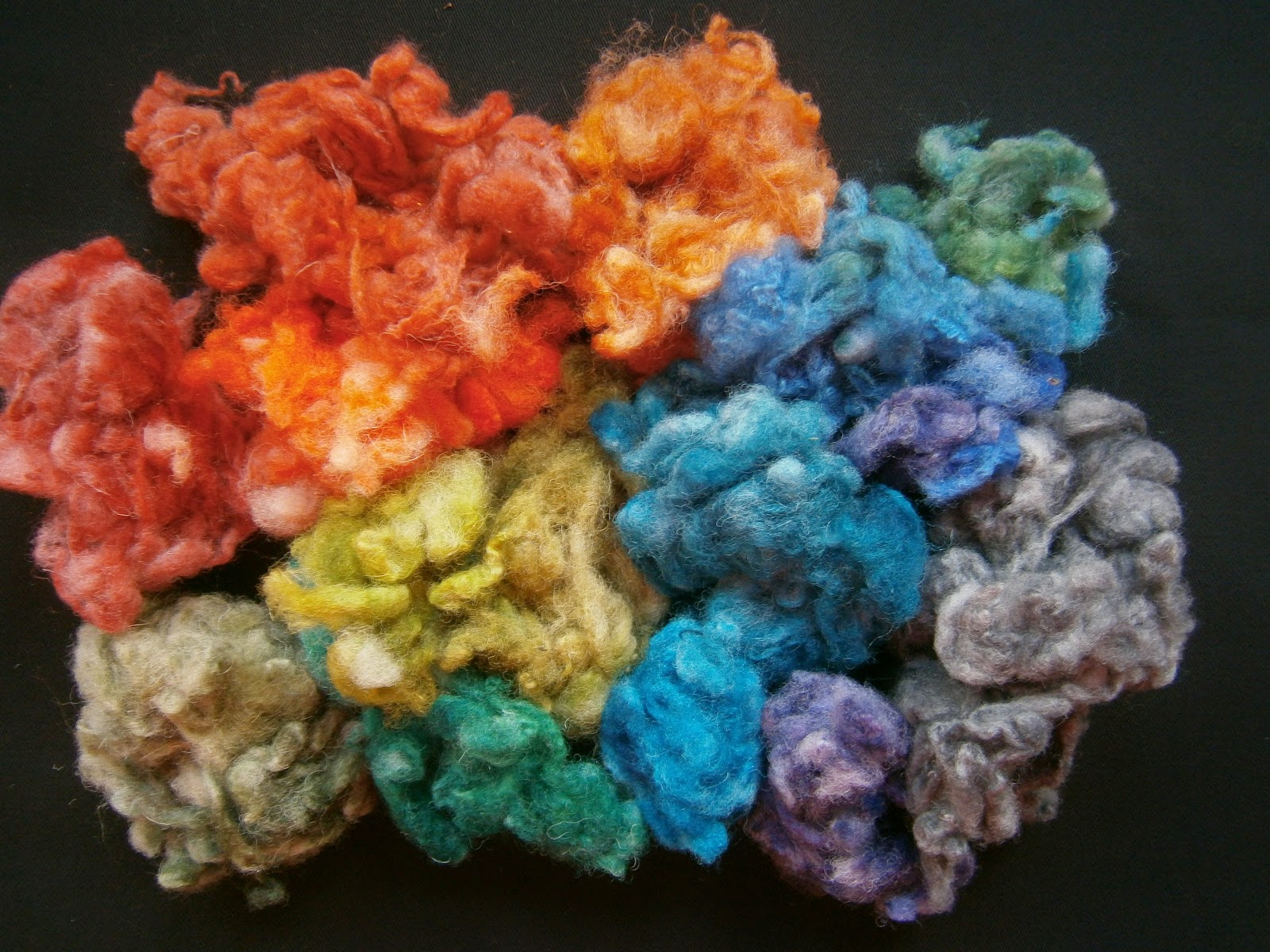 I've bought commercially dyed silk noil before, but it really isn't good compared to the small amount I dyed once, so I thought I'd give that another go: 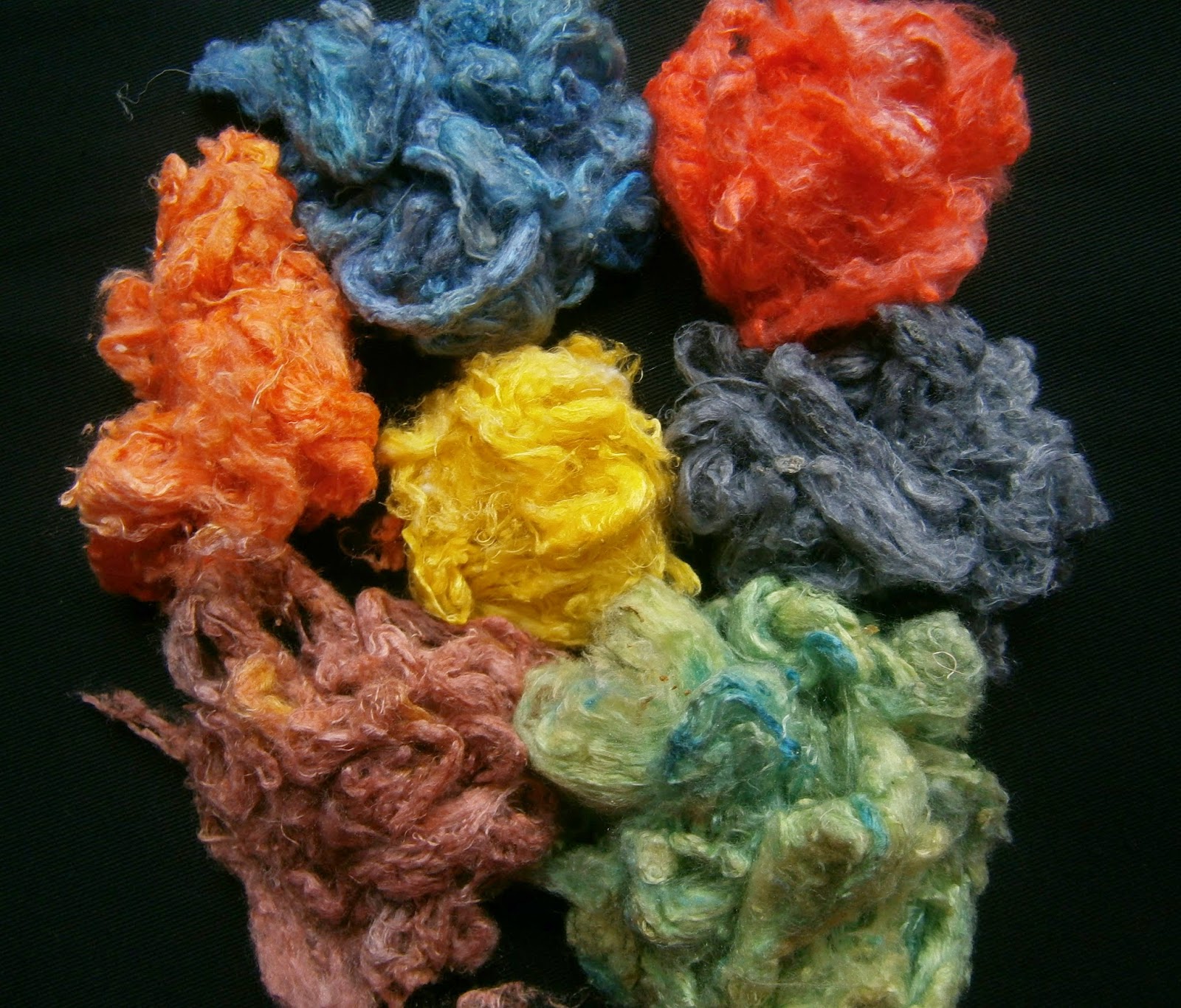 I also dyed some Tussah Silk tops - a good tip for anyone wanting to dye small amounts of fibre tops is to separate the amount you want to dye while the tops are dry, and soak them separately, it isn't easy when they're wet! 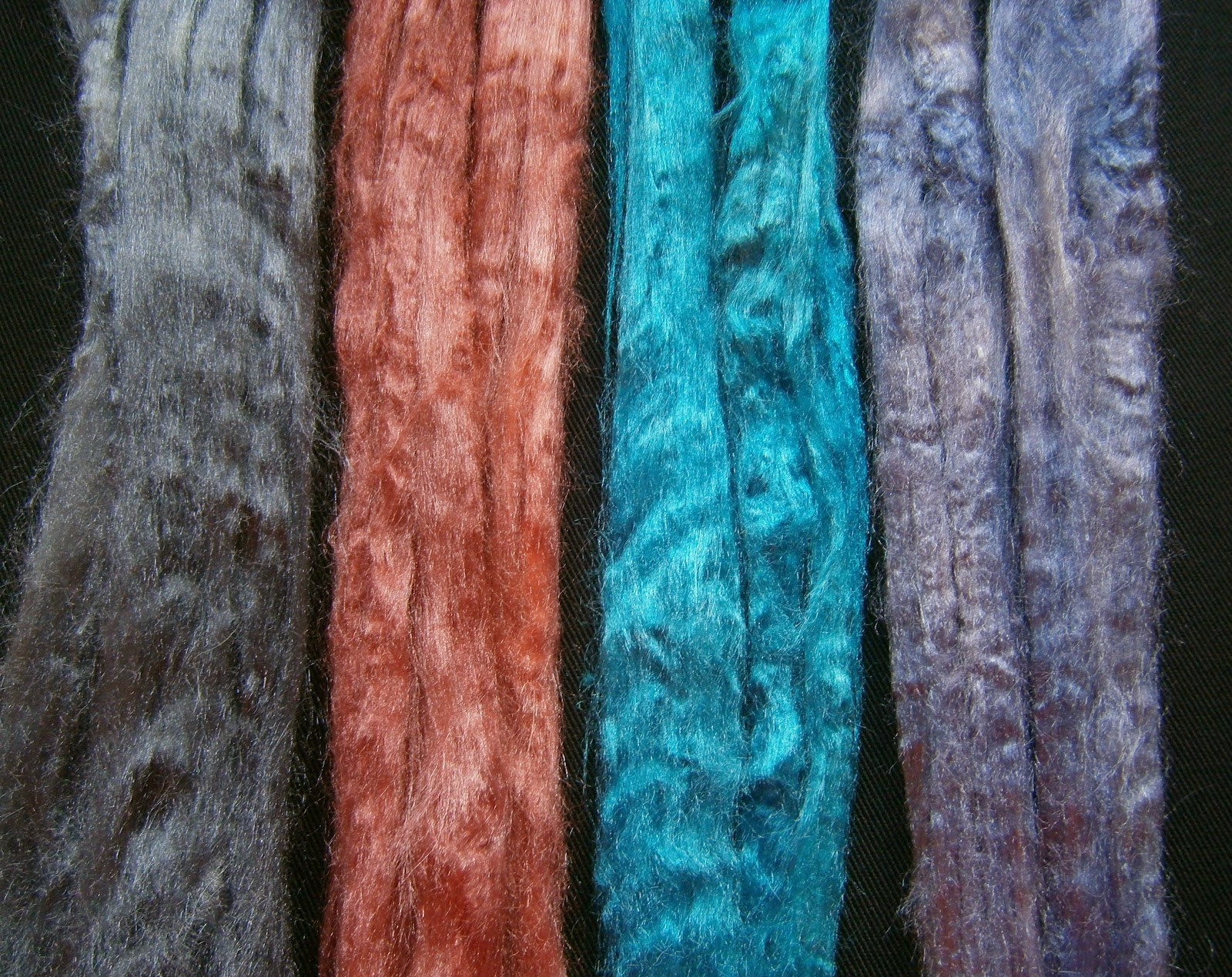 I used the same shades to dye some Soy top as I had on the Silk, and though they look similar, they soy definitely looks a lot shinier: 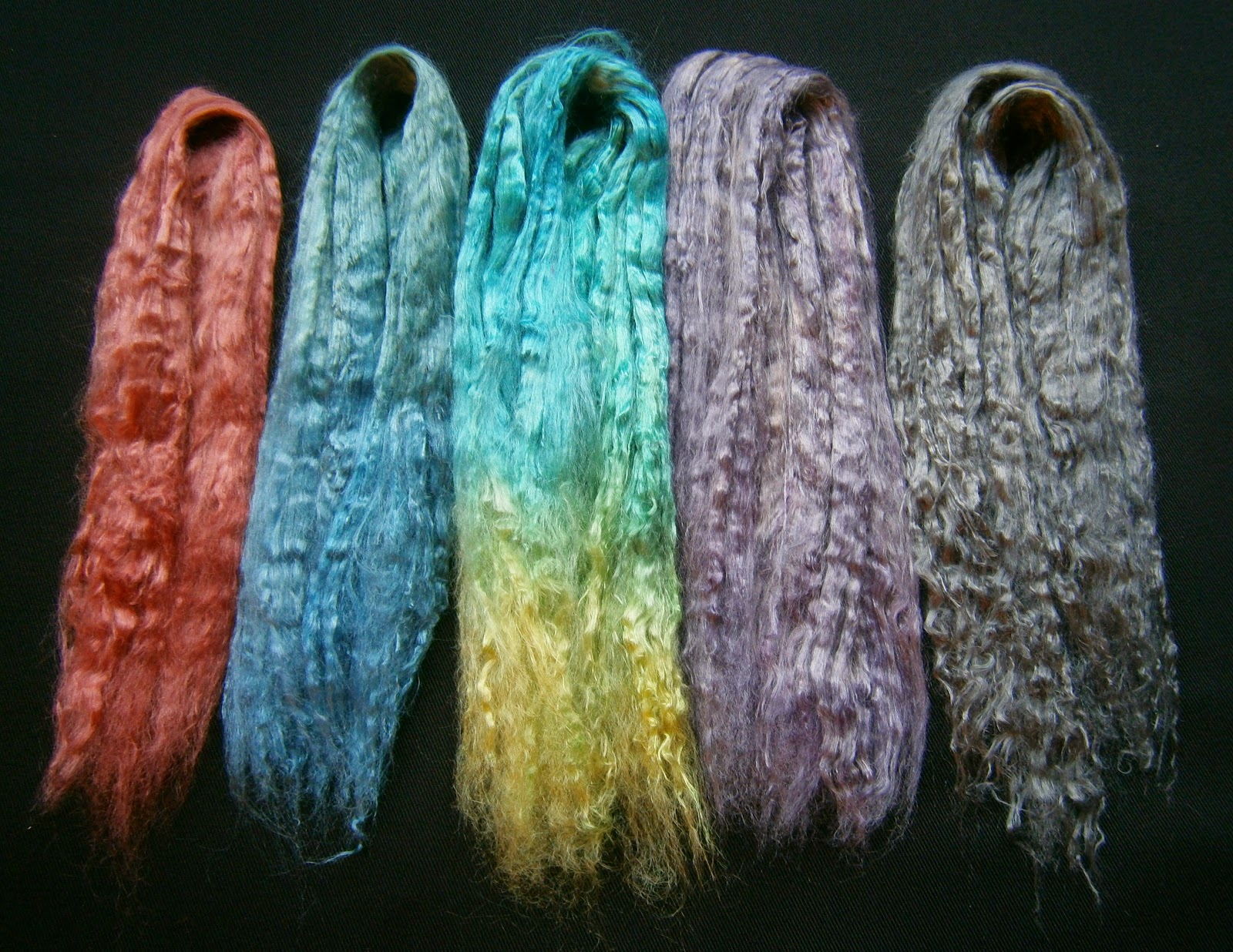 Neither of them come close to the colours and shine of the Milk though, but I did do these on a separate day and they weren't the same lot of dyes: 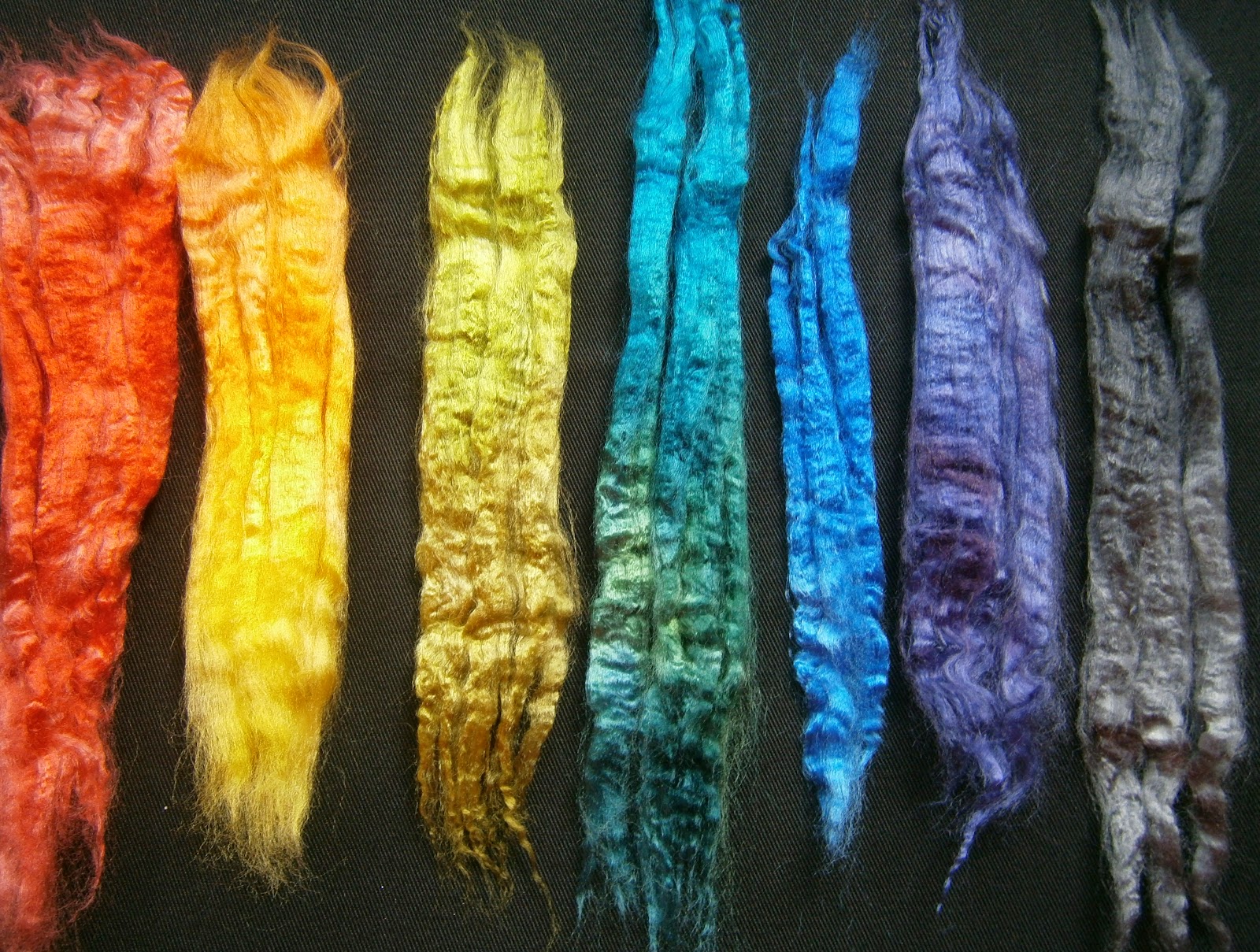 At the last minute I decided I wanted to dye some Gotland, Teeswater and Wensleydale locks. These were all raw, unwashed, so the night before my last lot of dyeing I gave some locks a shampoo and rinse. This is the Gotland: 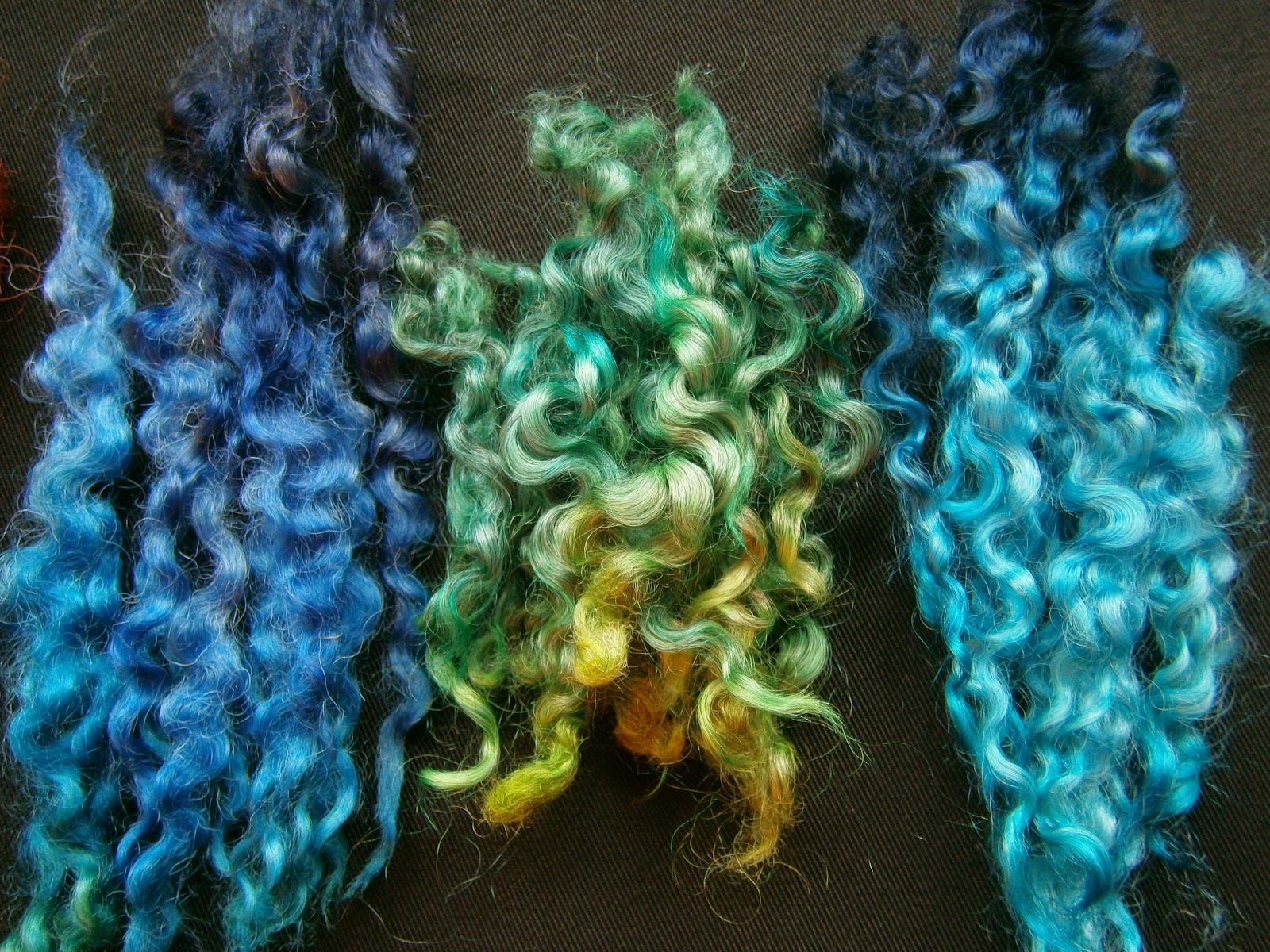 I do have some more stuff waiting to be photographed, some Bluefaced Leicester wool and locks, soy staple fibre and carded lambswool, I'll add those to my 'supplies' album on flickr when I get good enough light. The last one I've got for now is Trilobal Nylon (sometimes labelled as 'Firestar' and sold at exorbitant prices) cheap nylon tops. The photo hasn't really picked it up, but it has a lot of sparkle and these dyed really well: If anyone is interested in dyeing smallish amounts of fibres, I did a small tutorial on it a while ago: http://feltingandfiberstudio.files.wordpress.com/2011/12/direct-dyeing1.pdf  luckily this time, I had my fold out table for a larger work area!  I used acid dyes which are good for protein fibres (animal fibres, soy, milk, silk, and nylon too as it is a synthetic version of silk). I have tried it on bamboo before too and got some nice, pale results, so it's worth trying a sample or two :)

I did a 'Year End Round Up' post on the Felting and Fiber Studio today, having a look back over things I've made this past year. What did you enjoy making this year? Come and add to our discussion on the forum.

Every quarter we have a challenge on the Felting and Fiber Studio site. As December is coming to an end, I didn't think I'd ever find time to do the 4th Quarter Challenge. When I chose Land Art, I thought it had a really good scope for some interesting felt sculptures. I really liked the work of artists using twigs and branches, whether they were abstract, patterns, designed by colour, or like Tom Hare's work in willow, sculptures of plants, leaves, seeds, or even a sliced apple. I really liked this lotus seed head: http://www.tomhare.net/files/cache/6241679806767b541ec85e7977677c16_f44.jpg

I had a vague idea of what I wanted to do and how I wanted to do it. Something sculptural based on the things I'd seen with holes and stems and curves. I even thought I might do a series. Well, time was running out and I hadn't started, and I was thinking about what I could do to take part that wouldn't take as much time. For a few weeks I've had a piece of felt with a balloon inside, hanging in my living room doorway, it was the result of me thinking I'd try felting a winter woolly hat, and it ended up looking more like the start of a balaclava or fetish mask! So, I thought I'd improvise and use that. It wasn't far off the shape I'd pictured, and though I would have preferred to work with wet felt not fulled, I thought it was worth a try. So, I started cutting, wetting and shaping, and I was happy to see it was starting to look interesting! I rinsed it and put another balloon in to keep its shape while it dried. I thought it looked really good, it was nice and firm and kept it's shape without the balloon. I attached some string to get a photo, and this is what I saw when it spun around: 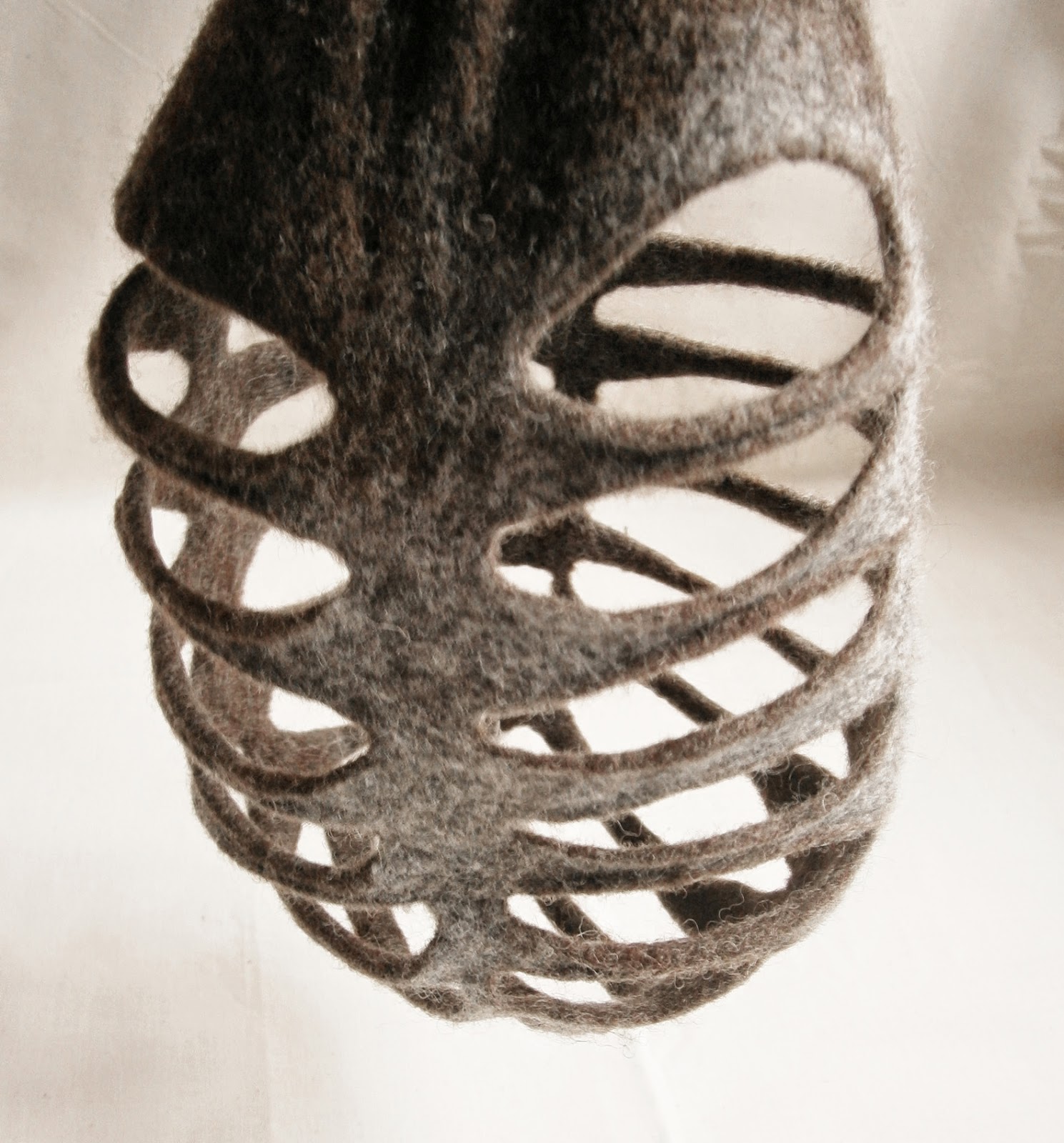 A ribcage! My fancy felt sculpture was meant to look plant-like, but it looked like a carcass! I took the string off and put it on the table, but it sunk a bit and that didn't look less dead either!: 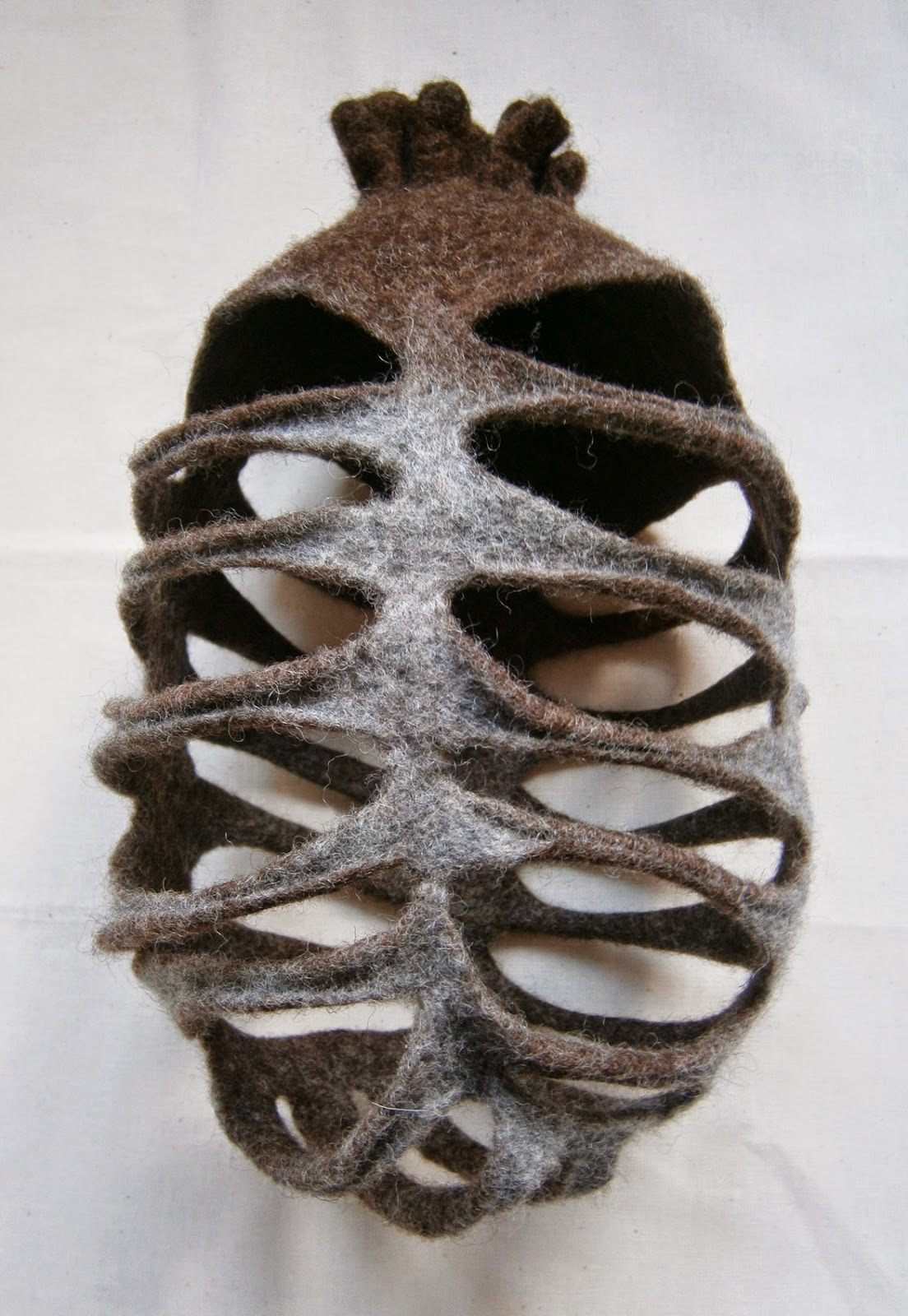 I reshaped it, the way it was meant to be, and that looked much better! I know it doesn't look like any plant or seed in particular, I wasn't copying anything, I just had a vague idea of shape, lines and holes: 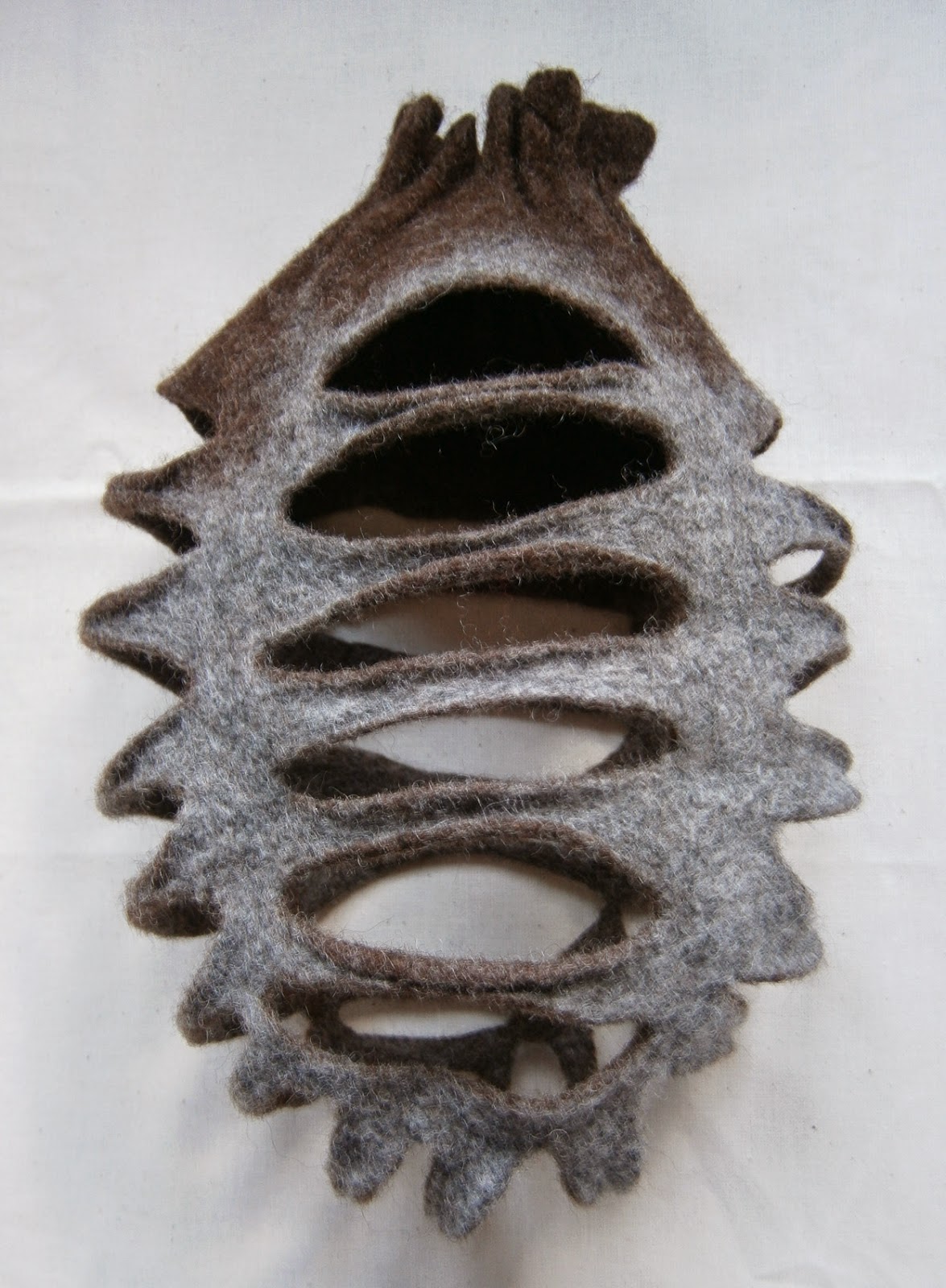 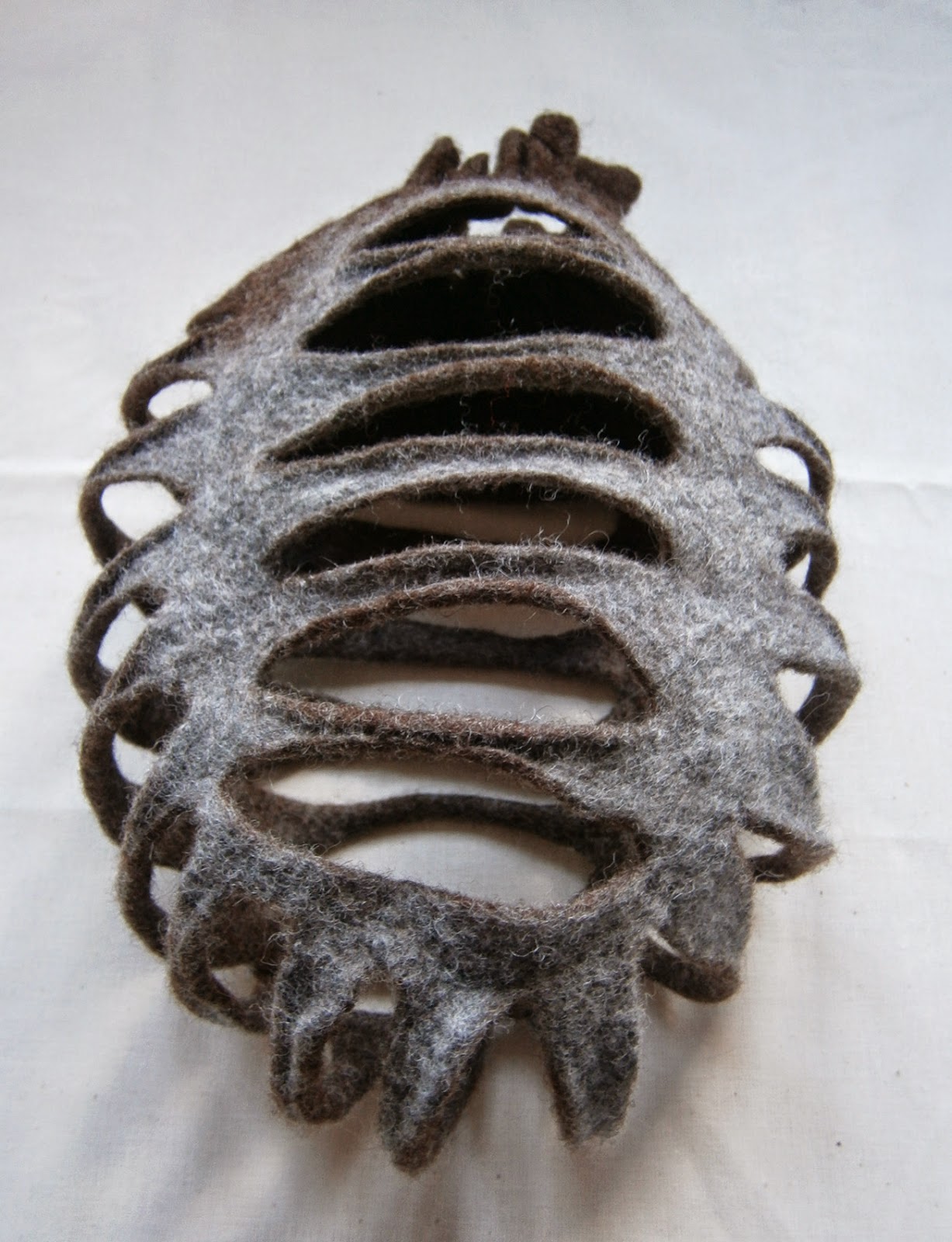 It does look much better hung up, less flat and more round. While I was messing around taking photos, I stood it upside down and squashed it, and that looked really interesting!: 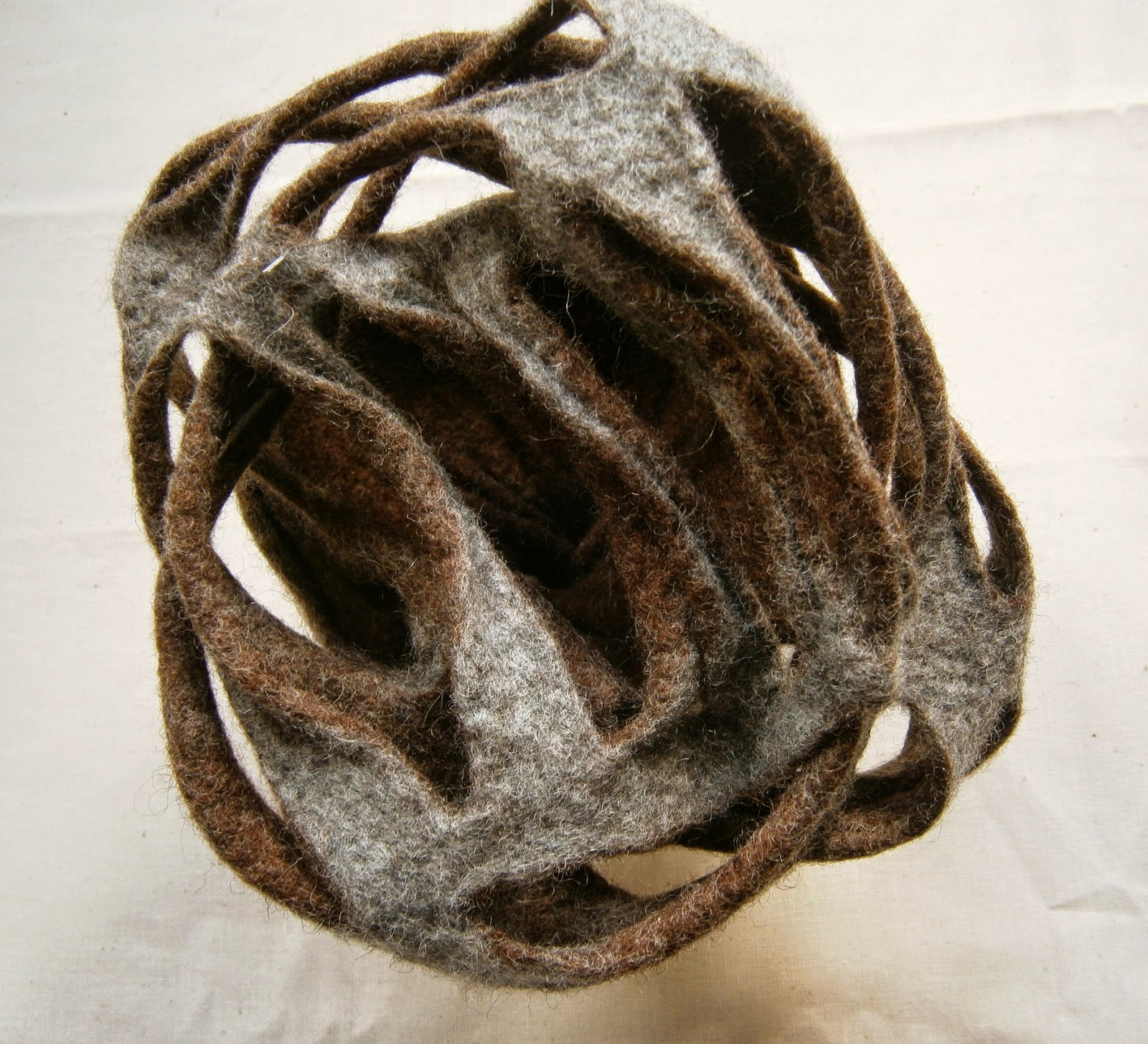 If you're stuck for a last minute present I've just added a load of handmade felt diary covers at special prices to my etsy shop. If you are in the UK and order this weekend, I can get them in the post on Monday and fingers crossed they'll arrive by Wednesday. (I obviously can't guarantee that though). 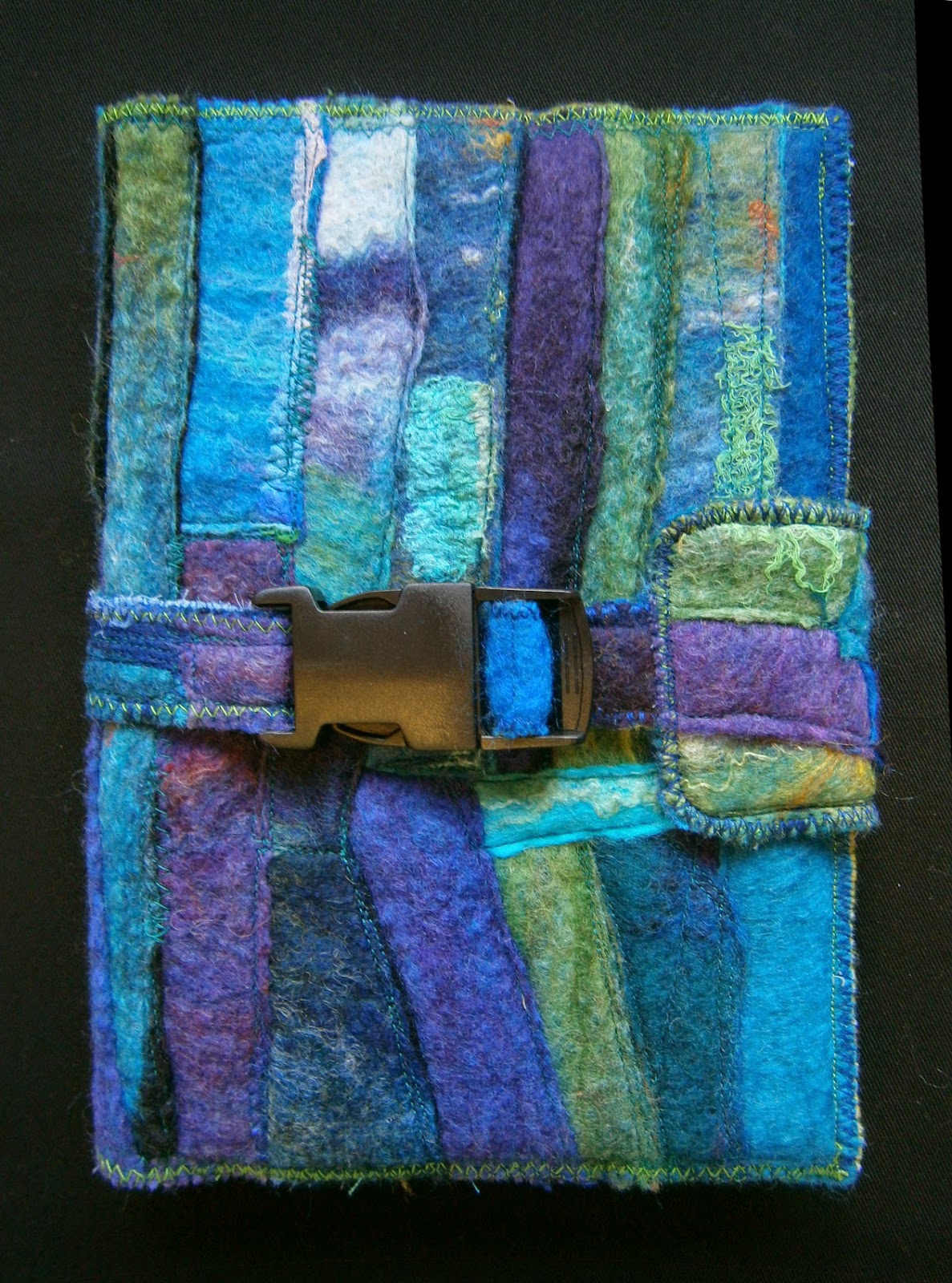 You can still order them in time for the New Year to do your resolutions, though! They come with 2015 UK diaries, so special dates and listings are relevant to the UK, but the days are still the same! So if you're overseas and don't care about Saint's days, bank holidays or the Queen's birthday or other stuff they put in diaries, I've included overseas postage prices too. 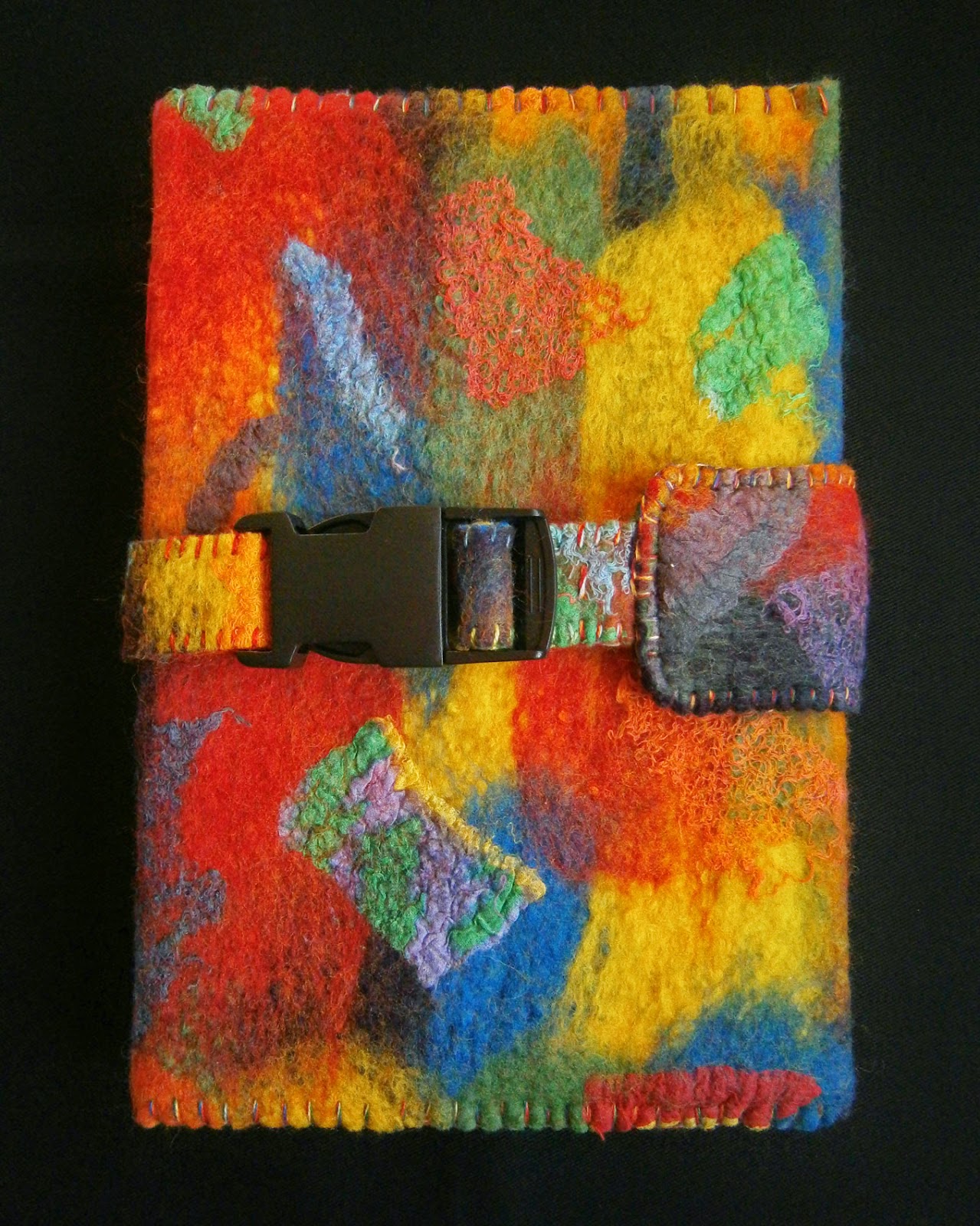 The diaries are standard A5 size, and the covers are removable, so you can replace the diary each year. Or swap it for a standard thick A5 notebook/journal etc. 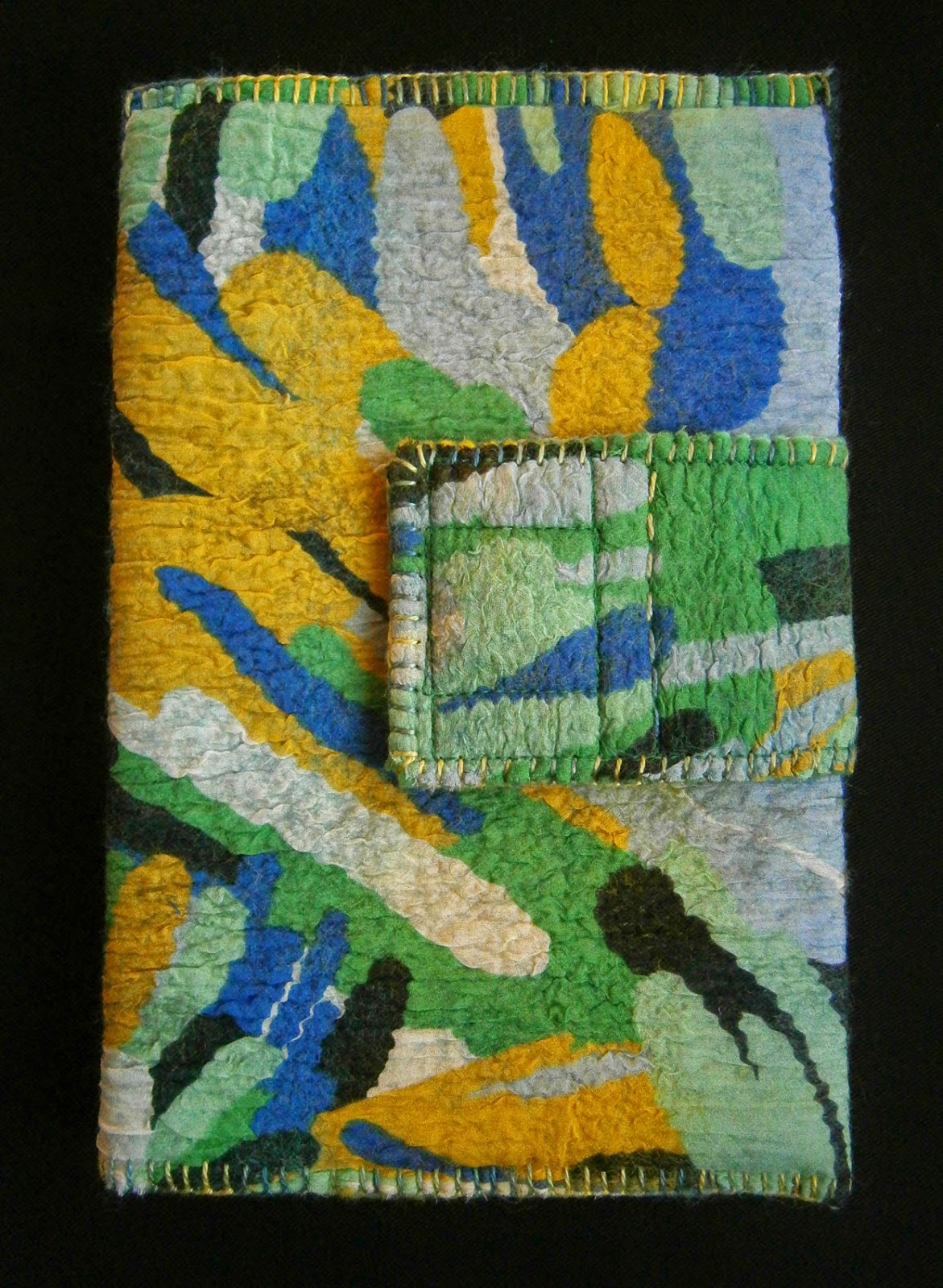 Because they are big, they are quite heavy, so overseas postage is a bit pricey. I you are interested in just the cover, contact me on etsy or facebook and I can weigh the cover without the diary and adjust the price/postage. 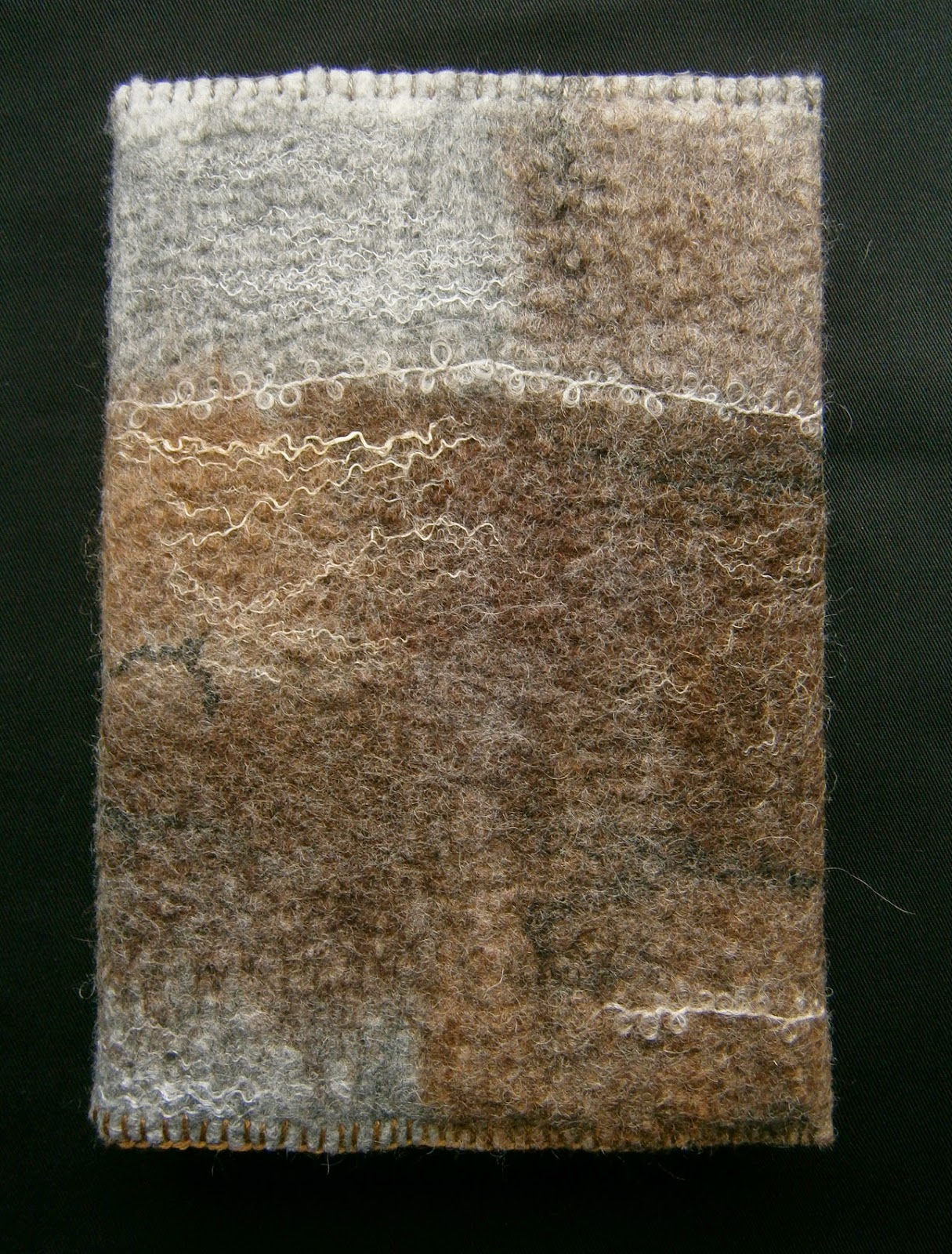 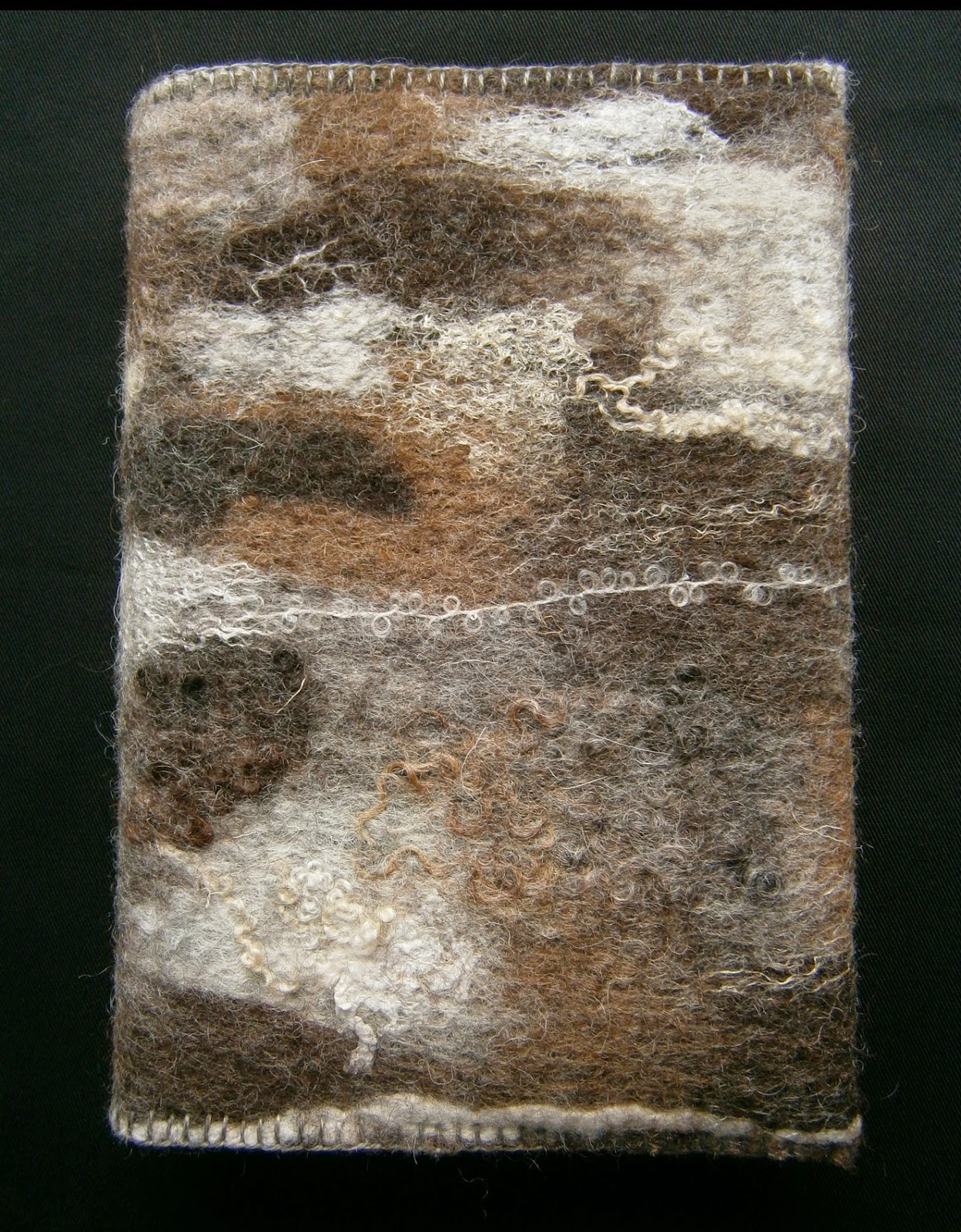 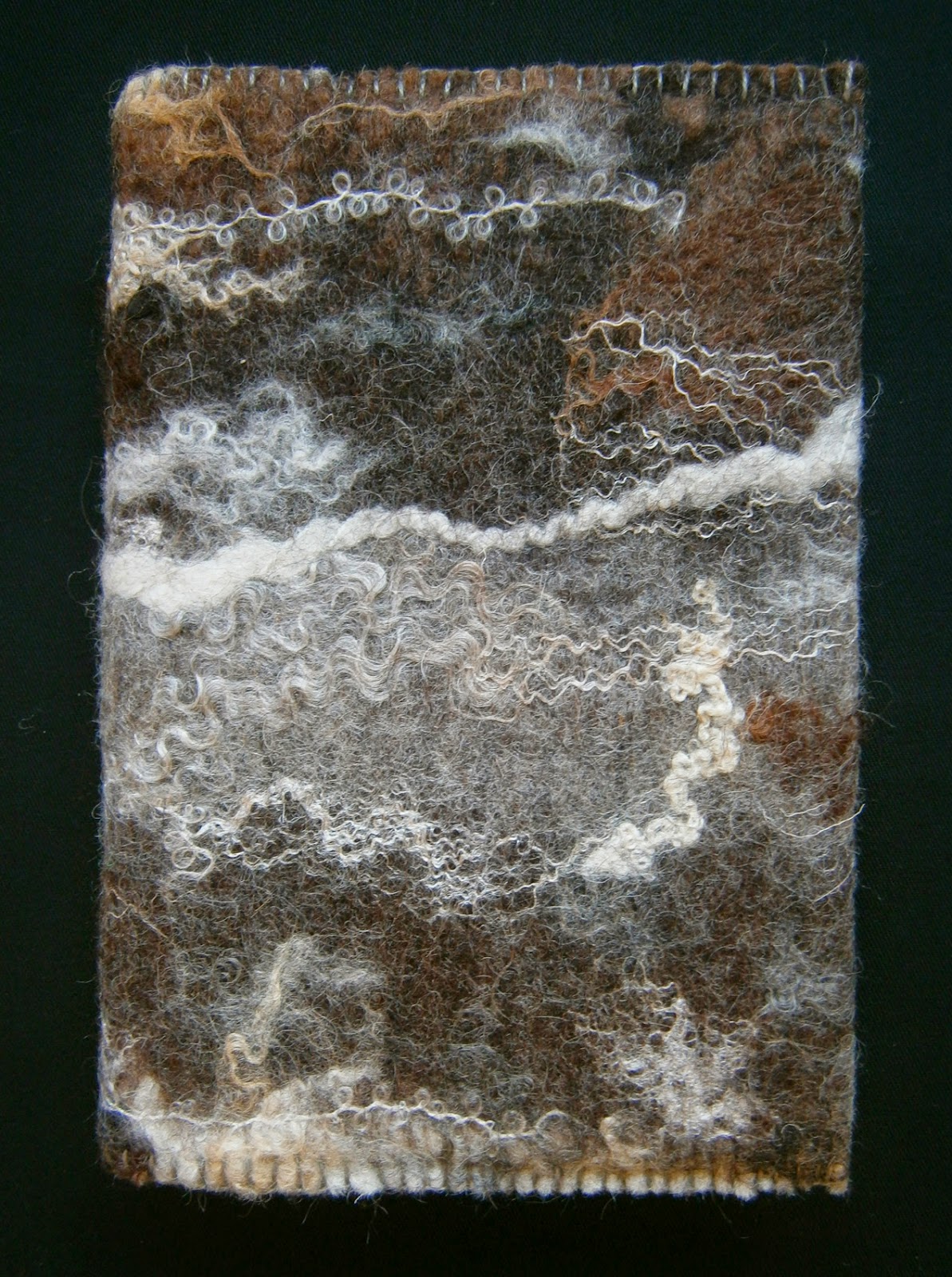 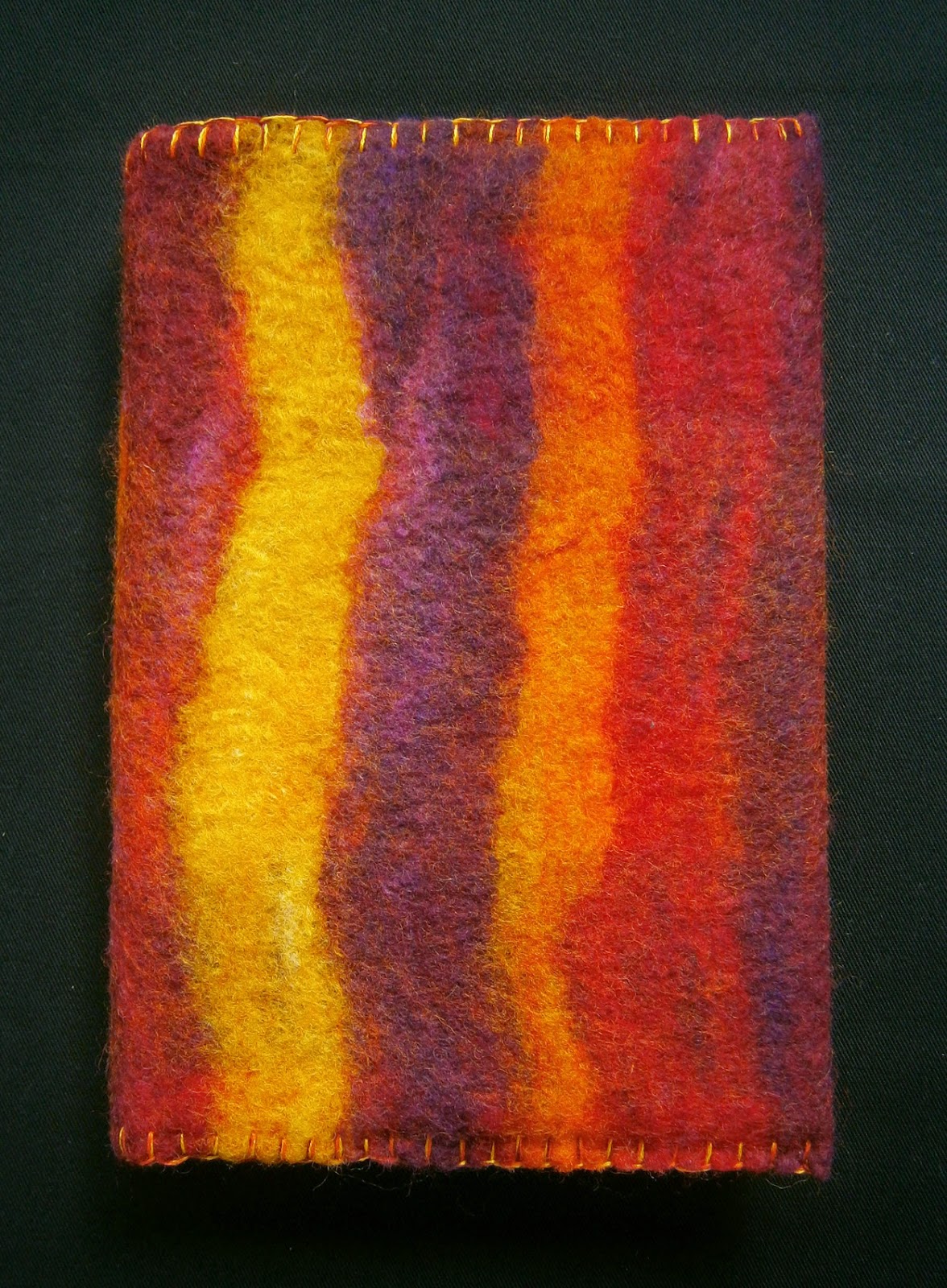 I didn't get a chance to do a blog post last week, so this is a longer one than usual. A few years ago, I tried a kind of plaid design felt, which ended up recently being made into a diary cover. I thought I'd give it another go, put a bit more thought into it. I thought I'd laid the wool out thinly enough to work how I wanted, but it's not as see through as I'd imagined. It still turned out alright though. 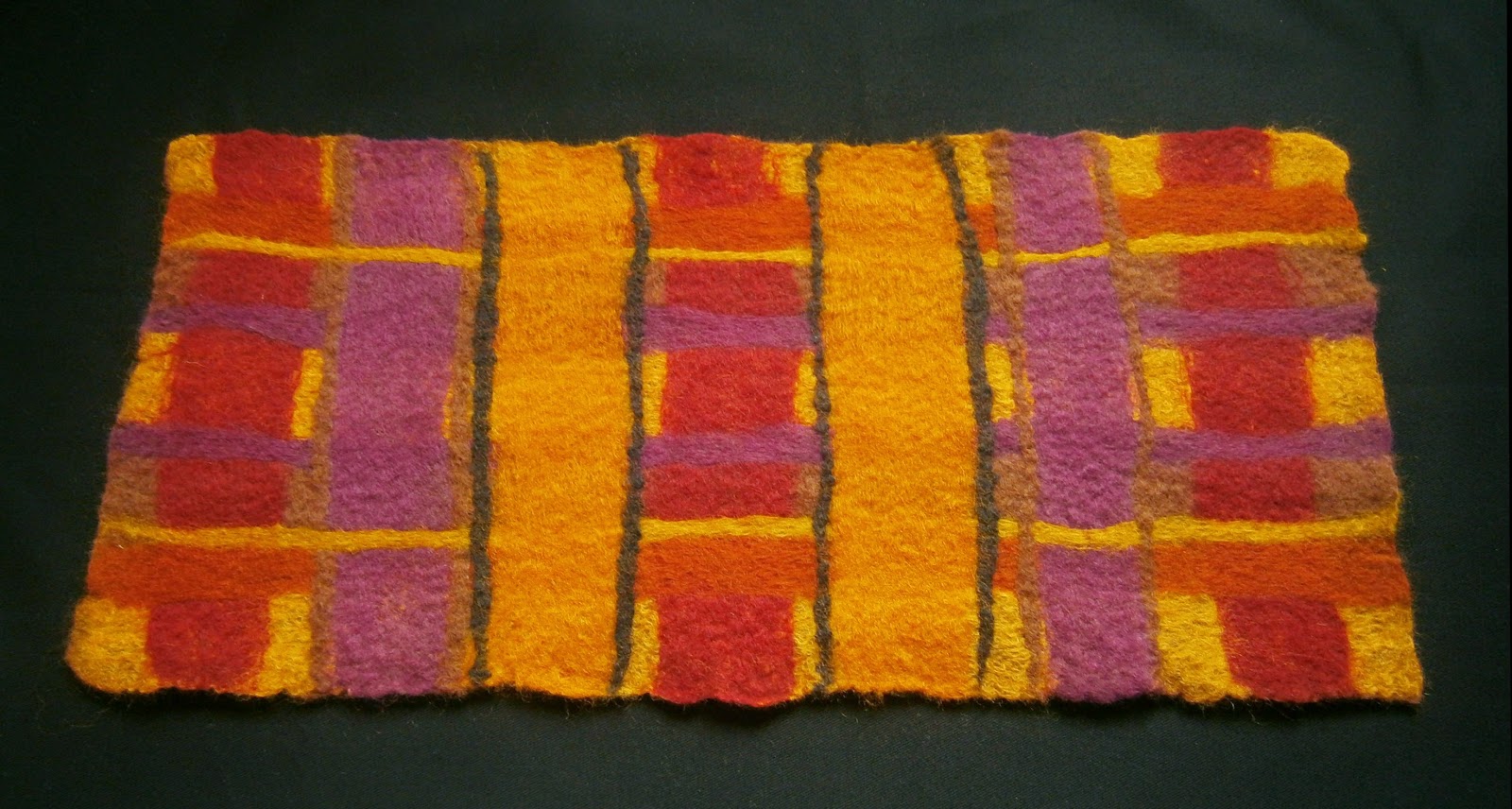 I blended some fine 18.5 micron Merino recently to make a scarf for my Dad for Christmas. I used what was left of a blue/purple/green blend I'd made for another scarf, and ran it through the drum carder with more green. This is one of the batts: 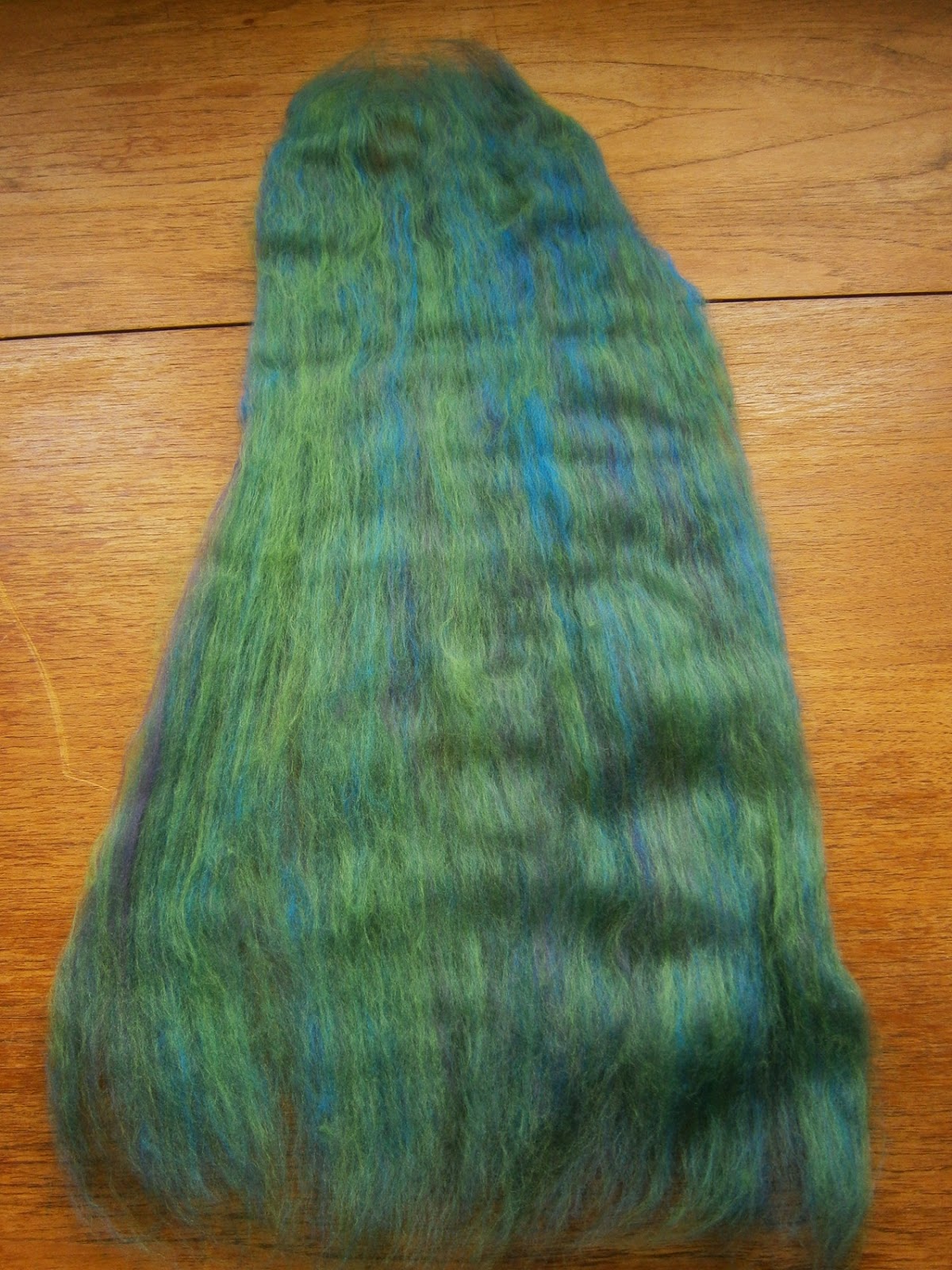 I had to go into town on Wednesday, so I wanted to try out a scarf I'd bought from a shop there when I last went, so I could see if it was worth getting more, since they were only £1 each. The batts I made for my Dad's scarf were the perfect colour so I 'borrowed' some of them to try a piece out:

It's probably just over a third of the size of a full scarf, or a full sized small collar: 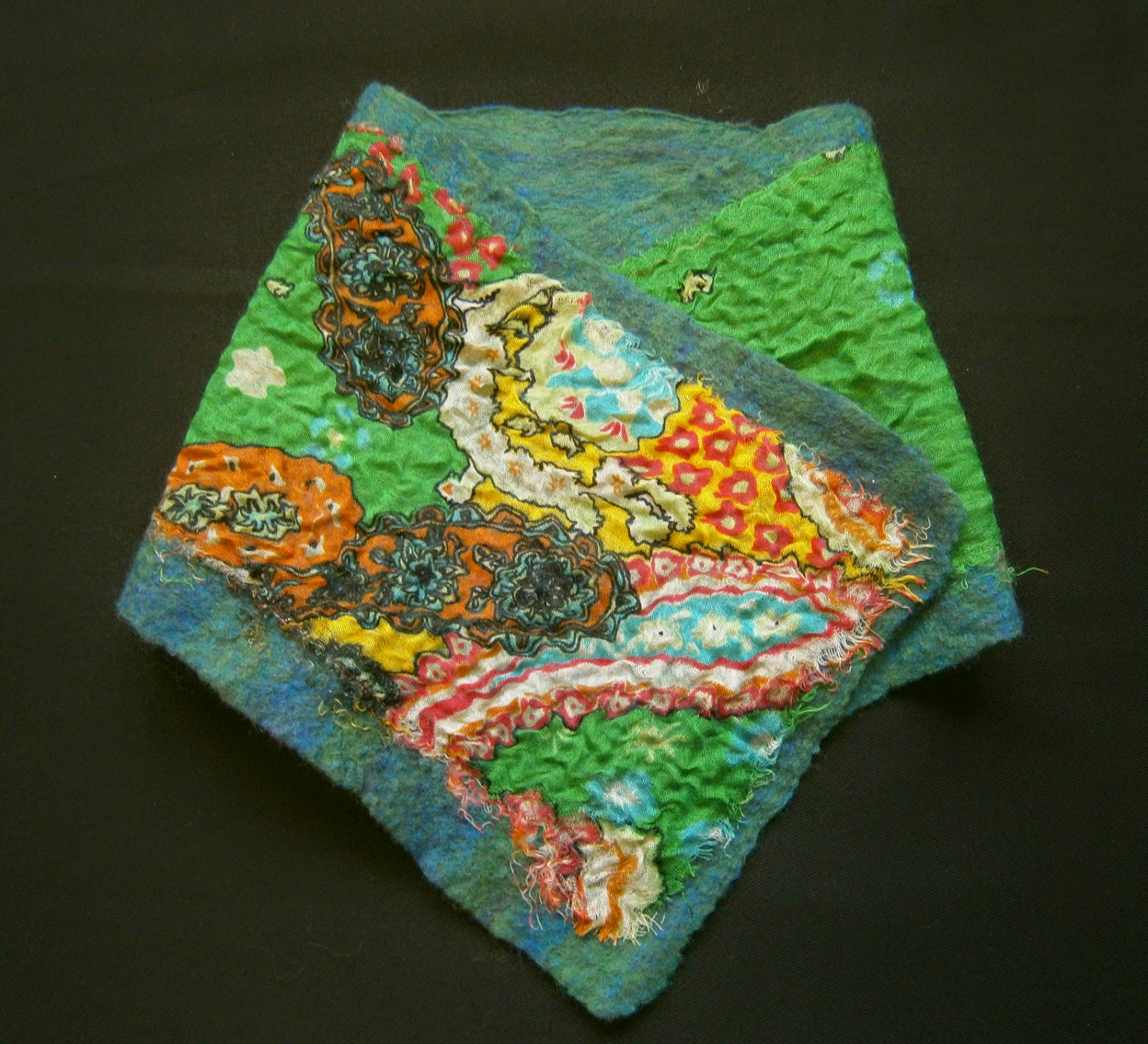 It made a really nice texture, which is a shame because the shop had shut down recently :( 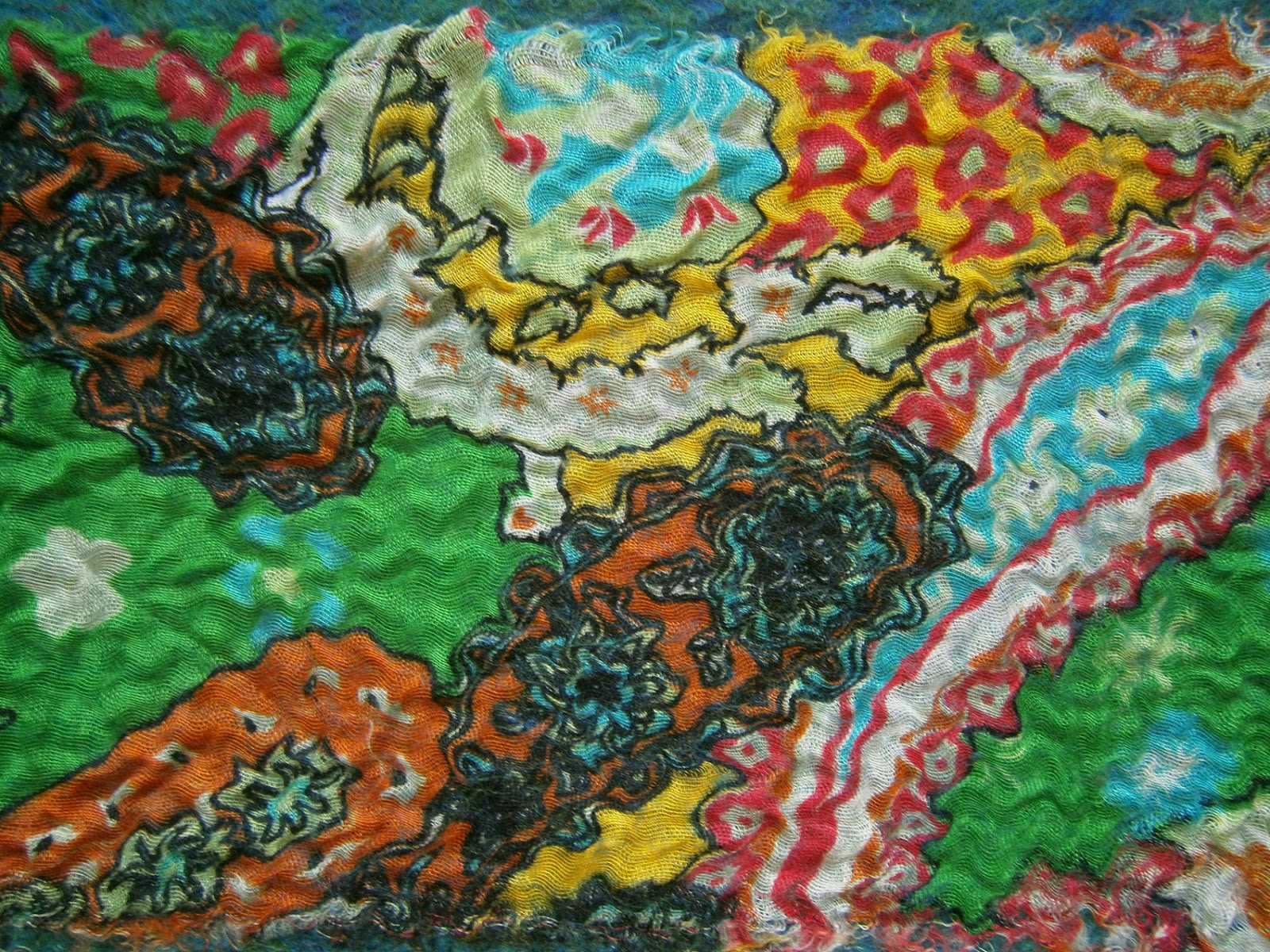 And, of course, a supermacro: 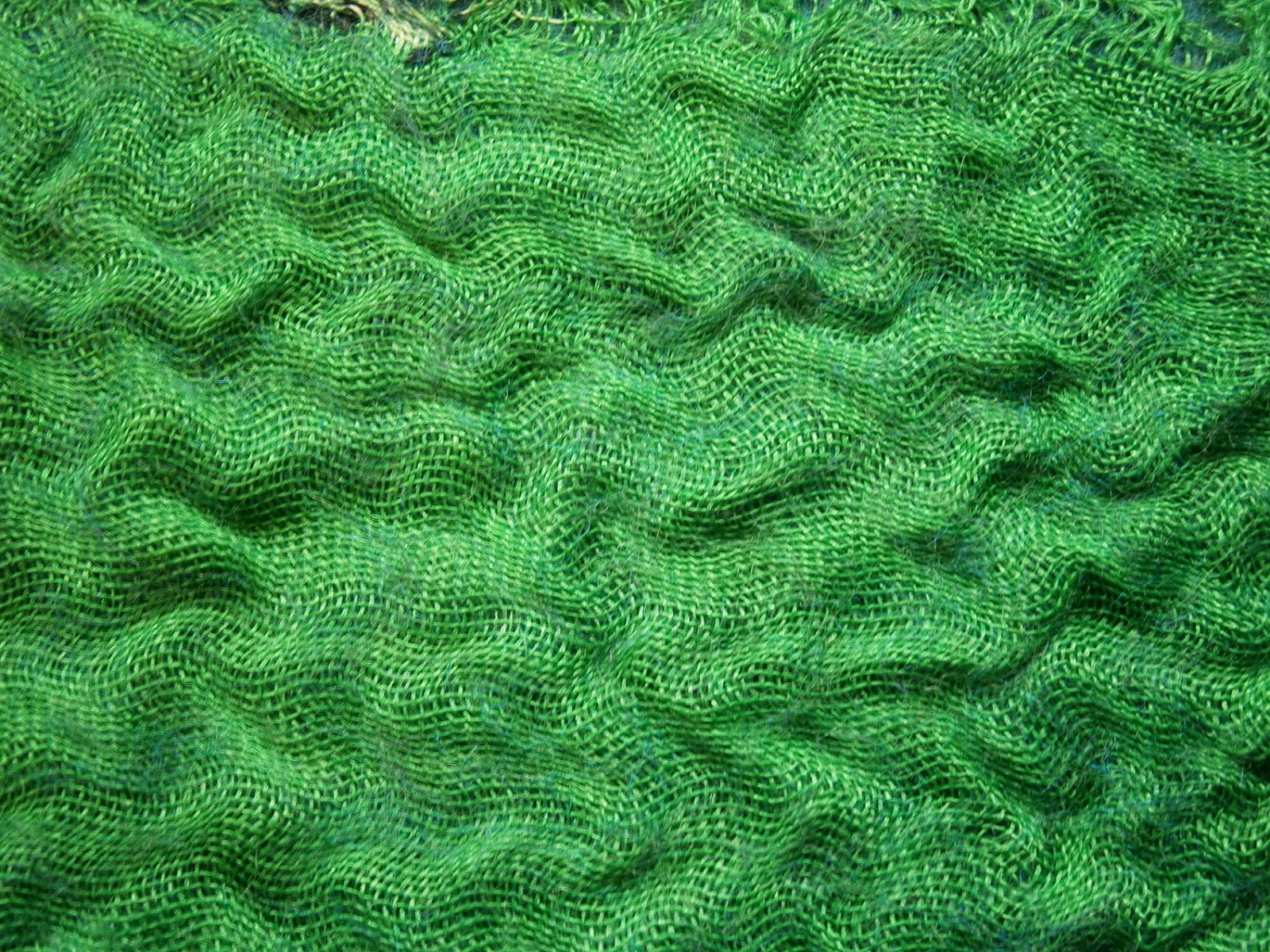 Those of you who go on the Felting and Fiber forum will have seen this piece, it's a sample I made using some georgette fabric I got from Abakhan last time:

I knew from other similar fabrics I've used that it would only attach loosely, the weave isn't particularly open, and one part of the bottom edge didn't attach at all. Even though I was fairly certain it would felt like it did, I like to just try a sample on top without wisps etc at first to get a good idea of how it felts, sometimes fabrics like this attach well around the edge if they are quite frayed. 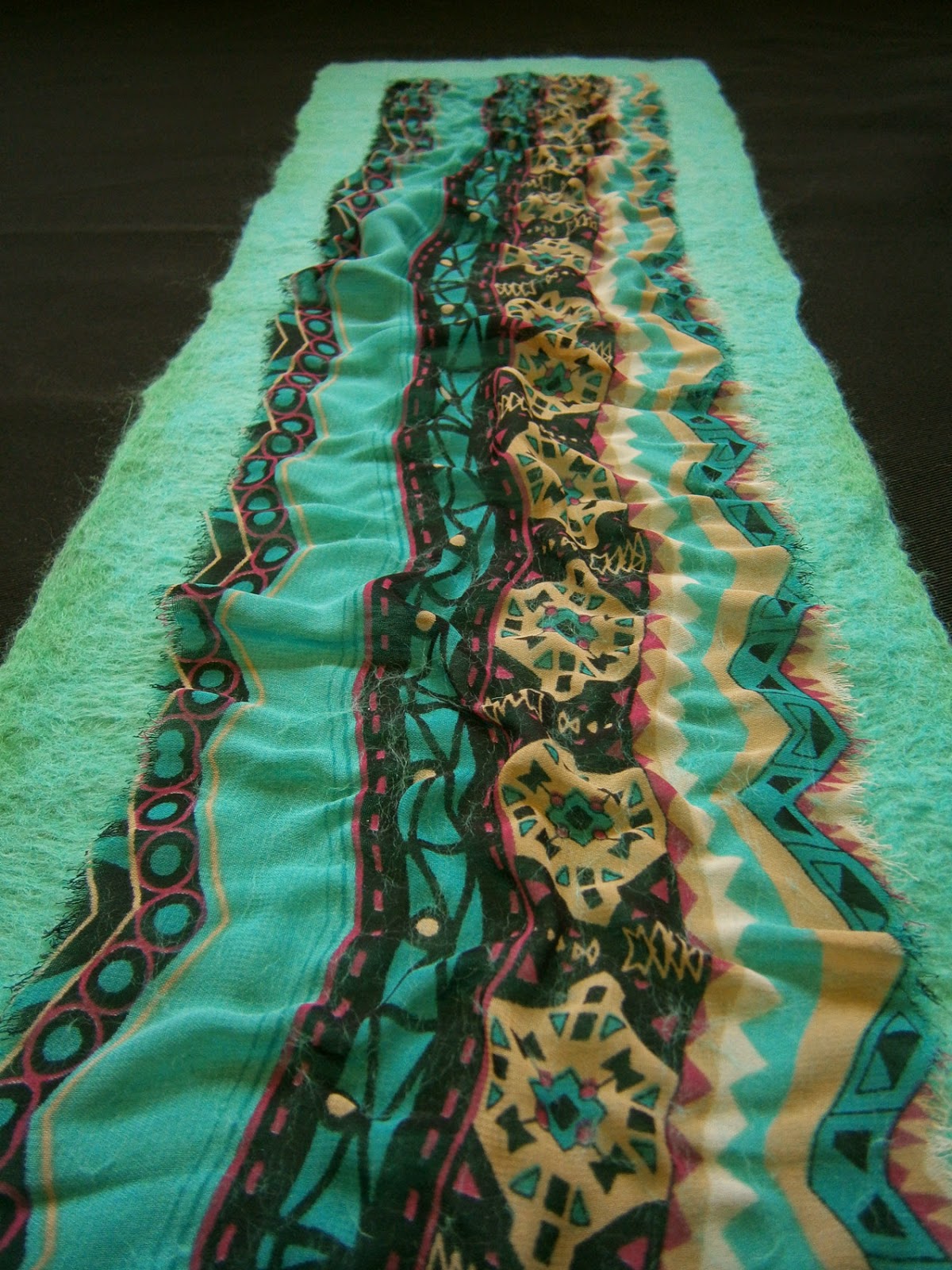 I haven't decided what I'll use it for yet, but I did make it big enough to make a coin/zipper purse out of, I thought that might look nice.
Posted by Zed at 18:19 4 comments: