My old computer died a few weeks ago, and we had a heatwave which made it far too hot to felt much, so I spent some time making some small notebook covers. 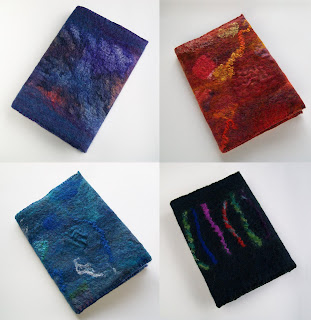 I wanted to try something a little different for a large notebook cover, so I had a look through my felting samples and found a piece of felt I tried not so long ago using fancy knitting yarns, like the fancy/funky fibres used for embellishing. I measured my notebook, added on some width for flaps, then extra for shrinkage then layed out my piece. It looked great when It was finished: 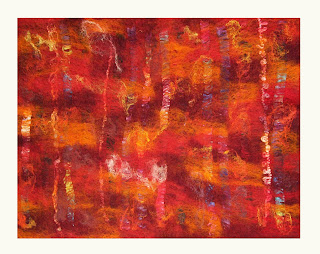 But for some reason, it had shrunk quite a lot widthways. So, I added a couple of inches to each side of the template and tried again: 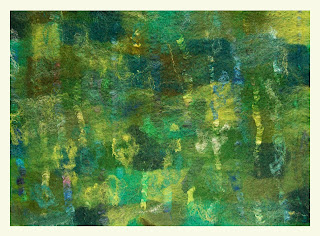 It still wasn't big enough. I don't know if it's something to do with the yarns, or maybe the two thin top layers that the fibres are trapped between, are thicker than one usual one, but for some reason, these were shrinking completely differently to all the others I made recently. So, I taped some extra paper to my already huge piece I use for templates, and added even more to the width. This time it worked! 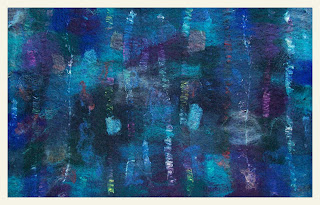 Now I can get on with sewing it into a book cover, and I've finally found a use for the 50 or so balls of yarn and all the packs of funky fibres I bought a couple of years ago!!

There are photos of some of the yarns I used, and the pieces before felting on flickr

** This is the notebook I made from the blue piece: 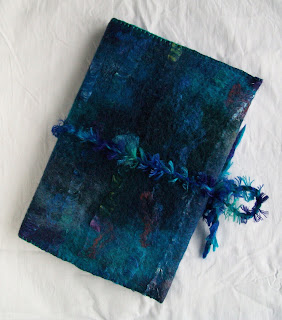