I don't think I've ever used a flat resist for a vessel like this before. The idea was to make it as an example of using resists to take to the felting class at the well-being centre, but before I'd even finished the layout, I knew it'd be too much for us to do in a couple of hours. I used lots of the Gotland locks from Zara, and decided to work inside out, so I laid these on the resist first. I used a couple of layers of Gotland fleece, then some cheaper 'Scottish Grey' I'd bought from wollknoll.  Between the Gotland and Scottish fleece I added some more Gotland locks around the top. There is a bit of a ridge inside, but I thought it turned out really well: 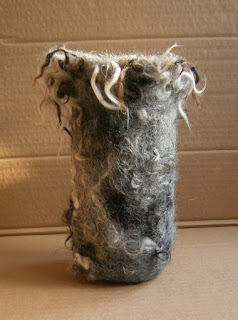 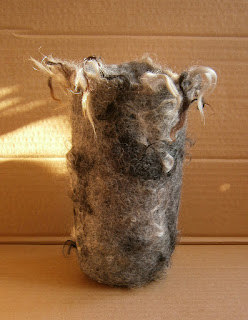 Here's a couple of close ups of the locks around the top: 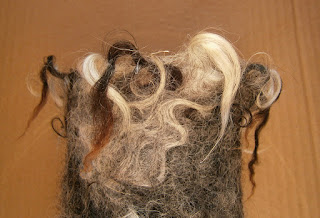 I used lots of different ones: 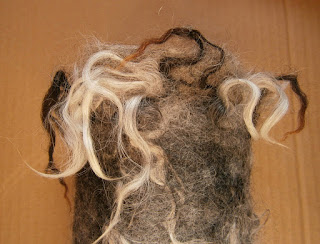 A closer look at the bottom, the locks felted in really nicely but still kept lots of character: 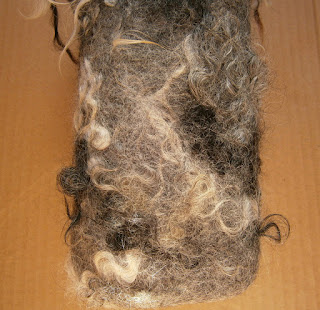 When we did use resists at the well being centre, they didn't quite turn out as planned. Because I had 'vessels' in mind and got out all the natural wools, I wasn't thinking properly, so cut a resist for a glasses case based on using Merino like I usually do, so when thick layers of English 56s, Finnish and Corriedale were used, it barely shrunk and turned into a small sturdy bag! I was running out of time, so only did 3 layers on my bird pod, so it ended up shrinking a lot more widthways and became very tall and narrow! One of the members in the group liked it though so hopefully the blue tits in her garden do, too :) 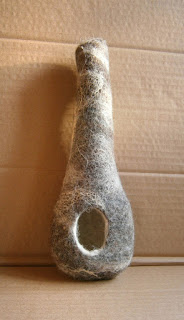