On my last post I showed a nuno felt piece I'd made using various wool tops I got in a recent bag of Botany Lap Waste from World of Wool. It became obvious that not all were Merino or even 100% wool, so I thought I'd try some samples. The first one is the kind of Royal Blue from the back of the nuno piece. I'd had a feeling at the time it might not be Merino, but it's surprising how different various tops can feel and even look when you use lots of different ones together, even when they're all 23 mic Merino. I know sometimes it's because they're old and a bit dry, but I think it has something to do with the dyes too: 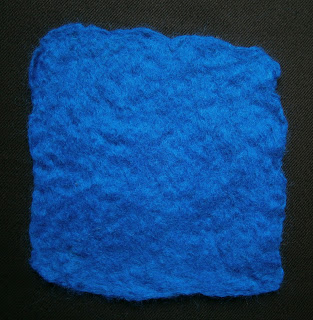 The staple length was really long, and it wasn't exactly coarse, but wasn't as soft as Merino, so I'm guessing it's Corriedale. This is on an angle: 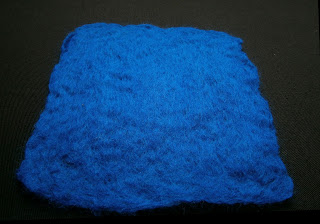 Some other tops I got were obviously not Merino or Corriedale. I'm going to guess at Shetland, because WoW don't do many different breeds of dyed tops, and because it looks similar to some green Shetland I got: 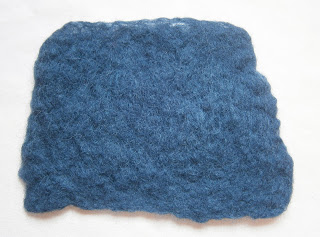 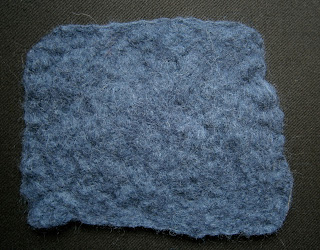 You can see on the close up it's coarser and hairier than the previous one: 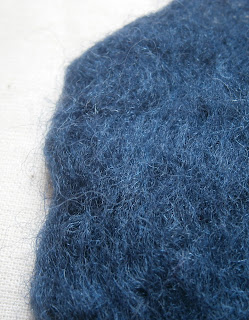 I don't think I used this next one on my nuno piece either, but it was very similar to the turquoise I used on the back. It was obvious straight away that this was never going to felt: 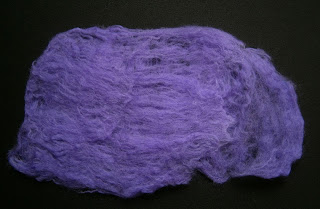 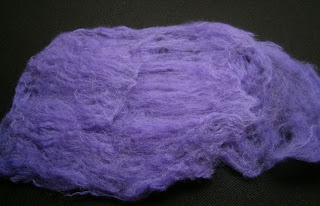 It's not even pretending to hold together at one end, where it started to 'drip' when I held it up wet: 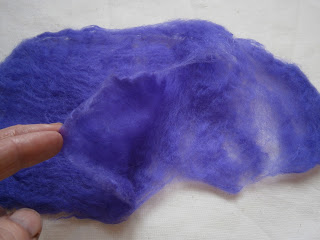 And this is what it looks like at the window: 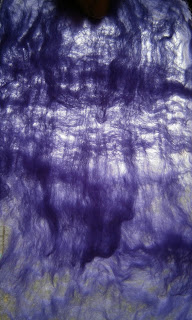 This was the turquiose sample. It was the lighter blue stripes on the back of the large piece, and I used it in patches in a couple of places. Not surprisingly, it felted, or didn't felt, in exactly the same way as the purple sample I tried: 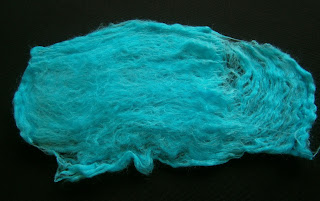 It even separated at one end like the purple piece did: 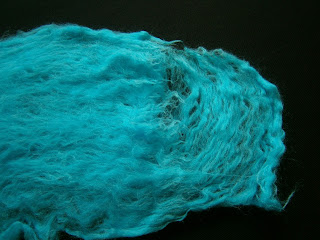 This is how it looked at the window: 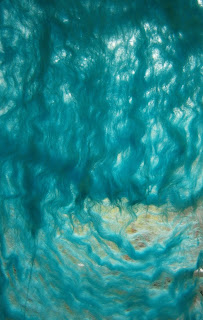 I don't know what these tops could be, the only similar experience I've had to this is trying to felt Suri Alpaca locks, but they did at least stay together, if loosely. Superwash has been suggested, but I don't think they do dyed Superwash or put it in the Botany Waste. Before I tried felting any of the Botany Lap waste tops, I'd tried spinning some. It was only the 2nd time I'd used my wheel, so thought the trouble I was having was beginner's issues and also because I was trying tops. My first attempt had been from blended batts I'd drum carded and was much easier. I'd always planned on using the spun yarn for weaving anyway, so used some on one piece: 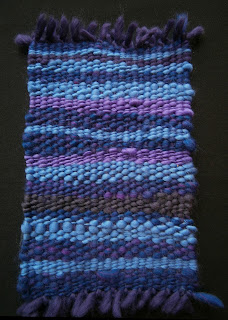