Sorry! I'm a terrible blogger, I know :(
I really meant to do an entry all about Alpaca in April after I'd spent a few days separating locks of Huacaya and Suri alpaca. But, I got sidetracked with other things and then it was Summer. I find the heat and humidity impossible to felt in, and my wool tops become staticy making it a nightmare to lay anything out. We had about a week of lovely cool weather recently though, so I took a chance and made myself a new felt notebook cover.
I wanted something colourful, so I used a rainbow mixture of bright blended merino:

I'm so used to using lots of  'extras' in my felt that it looked a bit 'flat', so I added some silk, ramie and bamboo tops, some silk scarf scraps, pieces of organza and cotton gauze, silk throwster's waste, a few locks of Bluefaced Leicester and some silk noil and a silk carrier rod:

I think I made my strips of merino a bit too narrow because the colours went a bit 'muddy' as they shrank together, but the other fibres lifted it.

It probably took me longer to decide which part to use as the front than it did to sew it :) but I finally made my mind up and made a simple notebook cover: 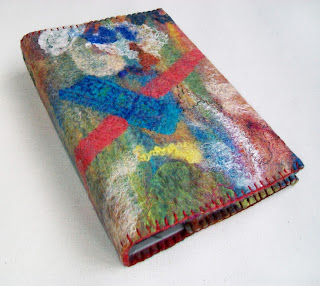 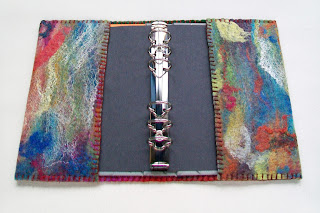 I have a set on flickr showing how to make a simple notebook cover and if, like me, you always forget how to start off with blanket stitch, or even if you've never tried it, I have a set for that too :)

*** I'm sorry, but Blogger's new way to really annoy me is by not allowing me to comment. I really hate not being able to acknowledge that people have left comments, but I do really appreciate everyone reading the posts and commenting, and I do read them all.
Posted by Zed at 11:45