I Love Alpaca fibre :)
It is so soft, silky and shiny and great for wet felting. A few months ago I decided to do a little experimenting to see how well alpaca would felt with just one and two very thin layers-the plan being that I would use the info for making a scarf.
I already had some Huacaya fleece that I bought a couple of years ago, so after spreading a huge sheet on my floor, I sat down and separated a huge pile of locks. 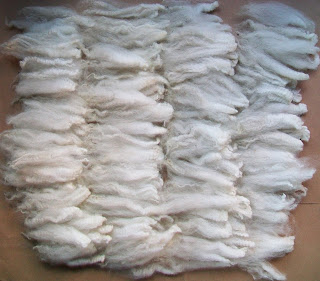 After separating the locks, I picked out any large pieces of vegetable matter, then combed the locks. I did this by carefully holding onto one end of the lock, then dragging it slowly through the teeth of a hand carder a few times. Then, holding the combed end, I dragged the other end through. It does take a bit of time doing this and the hand carder had to be cleaned a few times to get rid of tangled fibre and vm, but the end result is a huge pile of soft, fluffy locks with all the fibres running in the same direction. This might not be important for some felting projects, but for cobweb felt for example, it really helps to achieve the wanted effect. 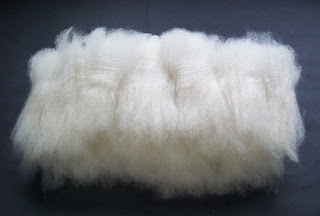 Some individual locks and a couple of locks after combing...I had to put the combed locks on a bright magenta background to get them to show up :) 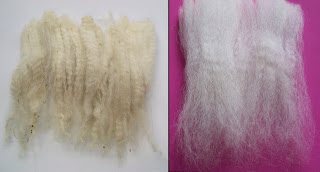 These weren't particularly 'controlled' experiments, I didn't take notes on shrinkage etc, it was purely to see how the alpaca would hold together, how it looked and how it would feel. I'll do all the calculations when I decide which alpaca and how many layers to use.
The one layer alpaca worked better than I expected. It's fairly obvious from the photo where the rows overlapped, but it held together very well, and the effect of the crimp and curl of the felted locks was really nice. 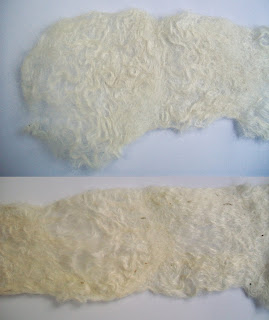 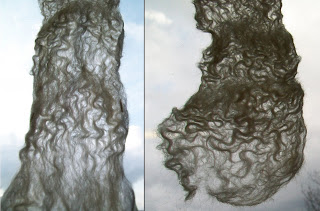 The two layer sample felted much more evenly and the overlapping wasn't as obvious. It felt less delicate than the one layer sample, but had as much 'drape' and felt even softer. The characteristics of the crimp and curl wasn't lost either. 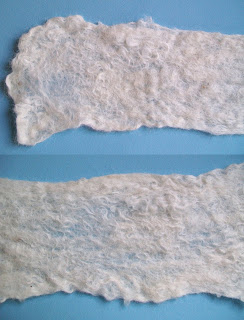 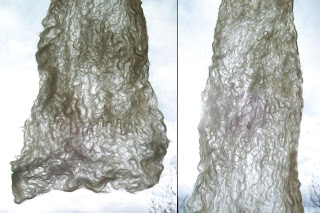 ﻿
I'll be trying the same thing with Suri Alpaca, I don't think I'll get to it until after Summer, and it'll probably take even longer before I blog about it, but I will do eventually :)
Posted by Zed at 13:59