This first notebook cover that I finished this week took ages to make. My temperamental sewing machine keeps refusing to catch the bobbin thread with the needle. Occasionally I can force it to, then it runs for a while, then I go to turn the piece I'm working on and realise it was just making sewing noises and everything I thought I'd just sewn is loose :(   I kept going back to this until it was finished, then put the machine away so it can't annoy me anymore. I had a collection of felt pieces I'd made with natural coloured wools and plant fibres. None of them were big enough for notebook covers and either too thick or too thin for coin purses, so I thought I'd make a few natural coloured collage notebook covers. Or just one as it turned out. I used some unbleached calico as the backing fabric to sew the pieces onto. I really like the way this turned out. This is the front: 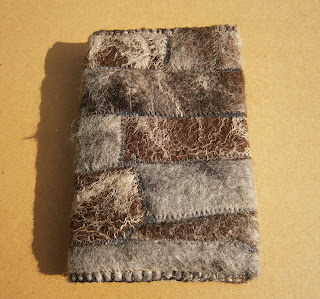 Some of the grey pieces are from a piece of felt I made for Karen's Weather Challenge on the Felting and Fiber Studio site, using grey Gotland Locks for rolling clouds. This is the back: 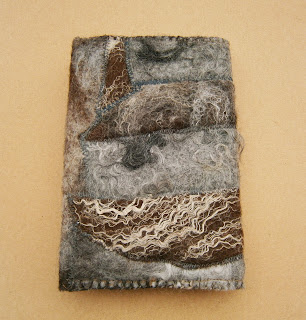 I machine stitched the top edges together, then finished off the edges and the flaps with some grey/brown thread I spun myself. It was quite chunky for a thinnish thread, but I like the way it looks. 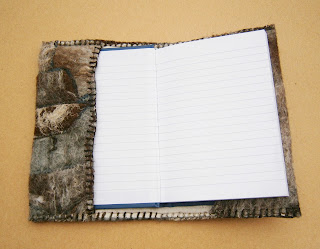 This next notebook cover is probably the nicest one I've ever made. I used a piece of nuno felt that I made for my Beyond Nuno book. It has some gorgeous flowery blue synthetic fabric nuno felted onto merino tops. I made a little tie for the front from an offcut of the nuno felt. I cut a strip about 8-10mm wide and wet it with soapy water and rolled between my palms until it formed a cord. I used a spring toggle as the fastener. This is the front: 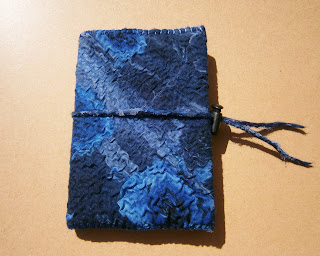 This is the back: 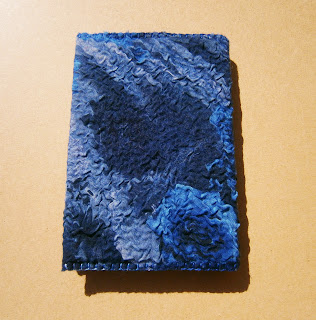 I really love the colours and the way the fabric rippled so nicely. 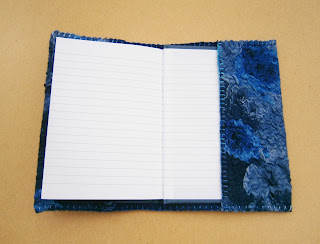 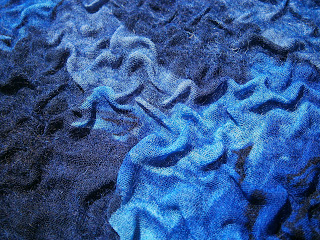 I'm getting better at letting things go and listing them on etsy, but if this doesn't sell before the listing expires, I'm keeping it!
Posted by Zed at 11:50