I found time last week to make a notebook cover from the bright flowery nuno piece I recently made. The finished felt piece turned out bigger than I'd expected and I did play with the idea of making a passport style shoulder bag. Maybe if I'd had a nice button or some Delrin clips I would have, but in the end I thought a book cover would look nice. This is the front: 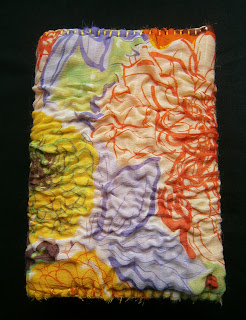 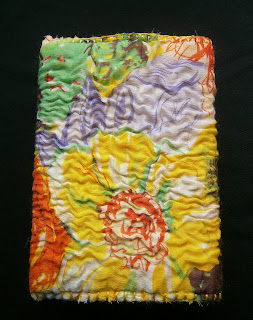 I usually leave the natural felt edges on the inside front flap, but when I worked out the best position of the felt for the cover, it ended up on the inside back : 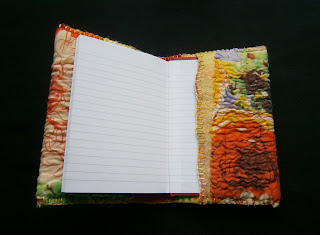 So the 'neat' cut edge is on the inside of the front. 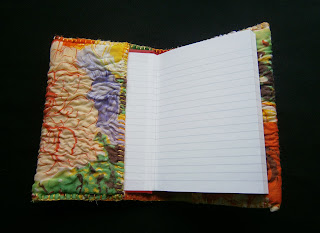 I've been mostly working on some ideas using natural wools and fibres recently. As much as I like nuno and brightly coloured Merino, the natural shades of wools and fibres and the different textures and properties of the wools and fibres and how they work together is a bit of an obsession for me :) I made a few pieces with different bamboo fibres this week. Some were just samples as I worked out the crinkles of ideas and played with the fibres to get the look I want. This is a sample piece I made using black bamboo blended with black merino: 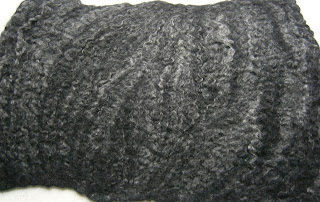 This piece worked out just how I imagined and wanted it. It's 18.5 mic Merino with bamboo staple fibre for subtle shiny texture: 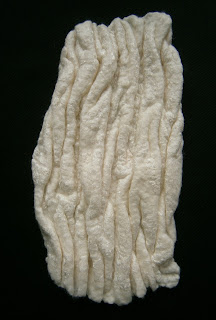 What have you been working on lately?
Posted by Zed at 13:09