A few weeks ago, my mum was talking about getting her bedroom redecorated. I'd been struggling to think of what to get her for her birthday, so this gave me an opportunity. I casually asked about the colours and she said she wasn't sure because she wanted to match the paint to the wallpaper she was having on one wall, luckily, she knew what the wallpaper was called, so after she left, I looked it up: 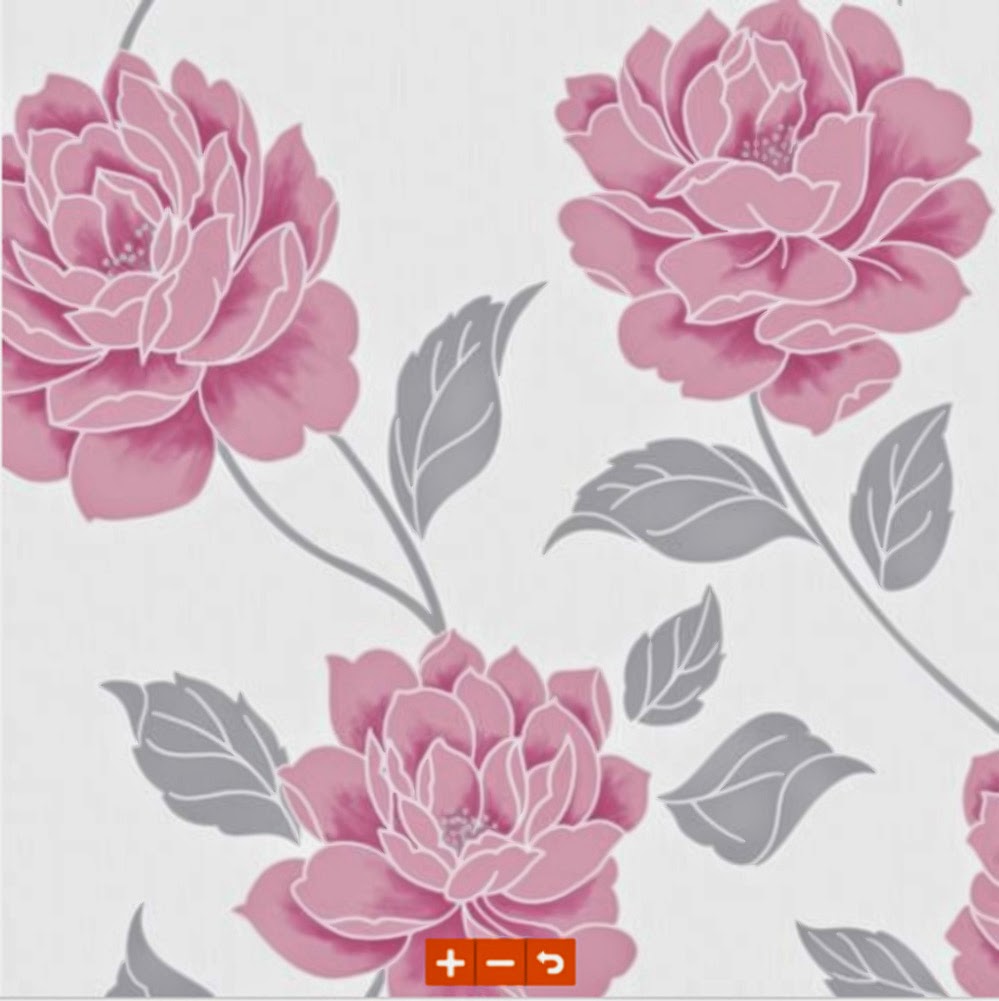 My first thought was to try to convince her to have the nice blue and brown version! But, I resisted and downloaded the picture. Then I opened it in Photoshop and tried to pick out all the colours and made an image with a few stripes in the various shades: 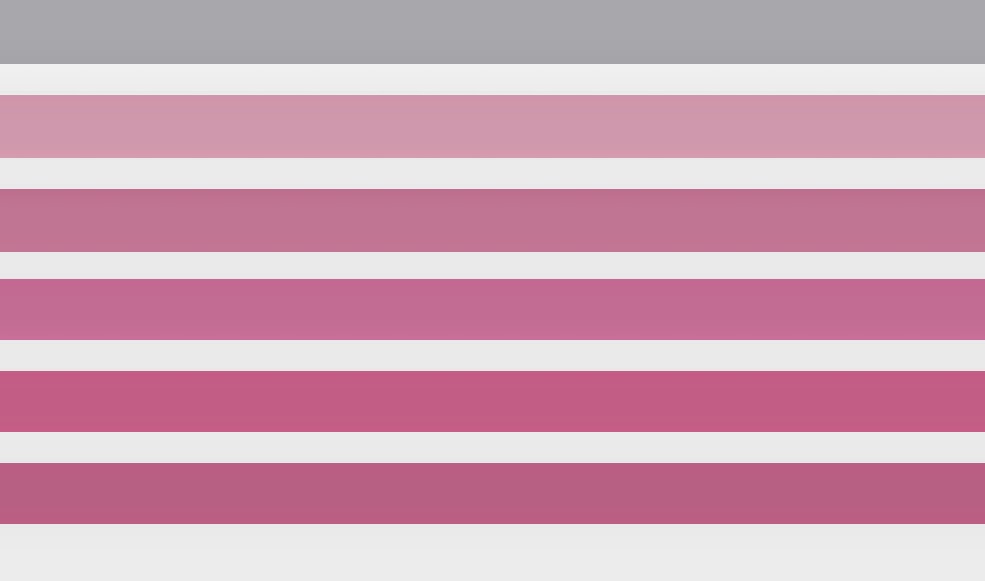 Then I printed out the sample and stripes and started to plan a wall hanging for her new room. I wanted something soft, texturey, not too neat. 'Raggy' is the best word to describe what I was after, I think. I spent a couple of days making blended batts in the shades I wanted. Then I spent a few days making twists of wool and fibres and also spun some 'arty' yarns for the piece. Unfortunately none of the photos I took came out :(  but when I'd finished making them there were at least 150 lengths of wool, commercial art yarns and fibres twisted or spun together. I laid out a couple of layers of wool tops, then carefully added all the twists where I wanted them. I had to take my table outside to felt it because it was so big and I knew I'd make a mess. 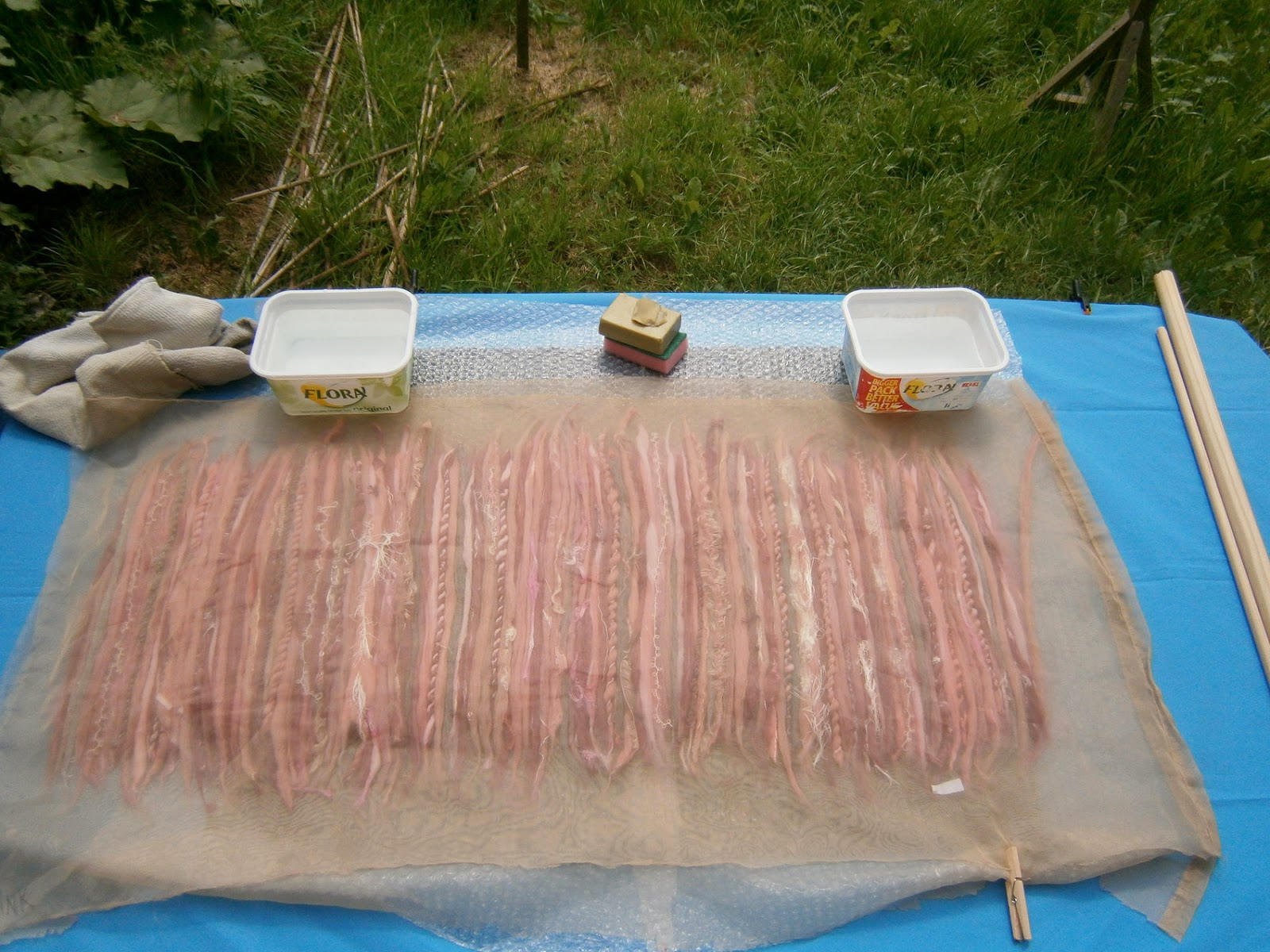 This is a close up of it with the netting on: 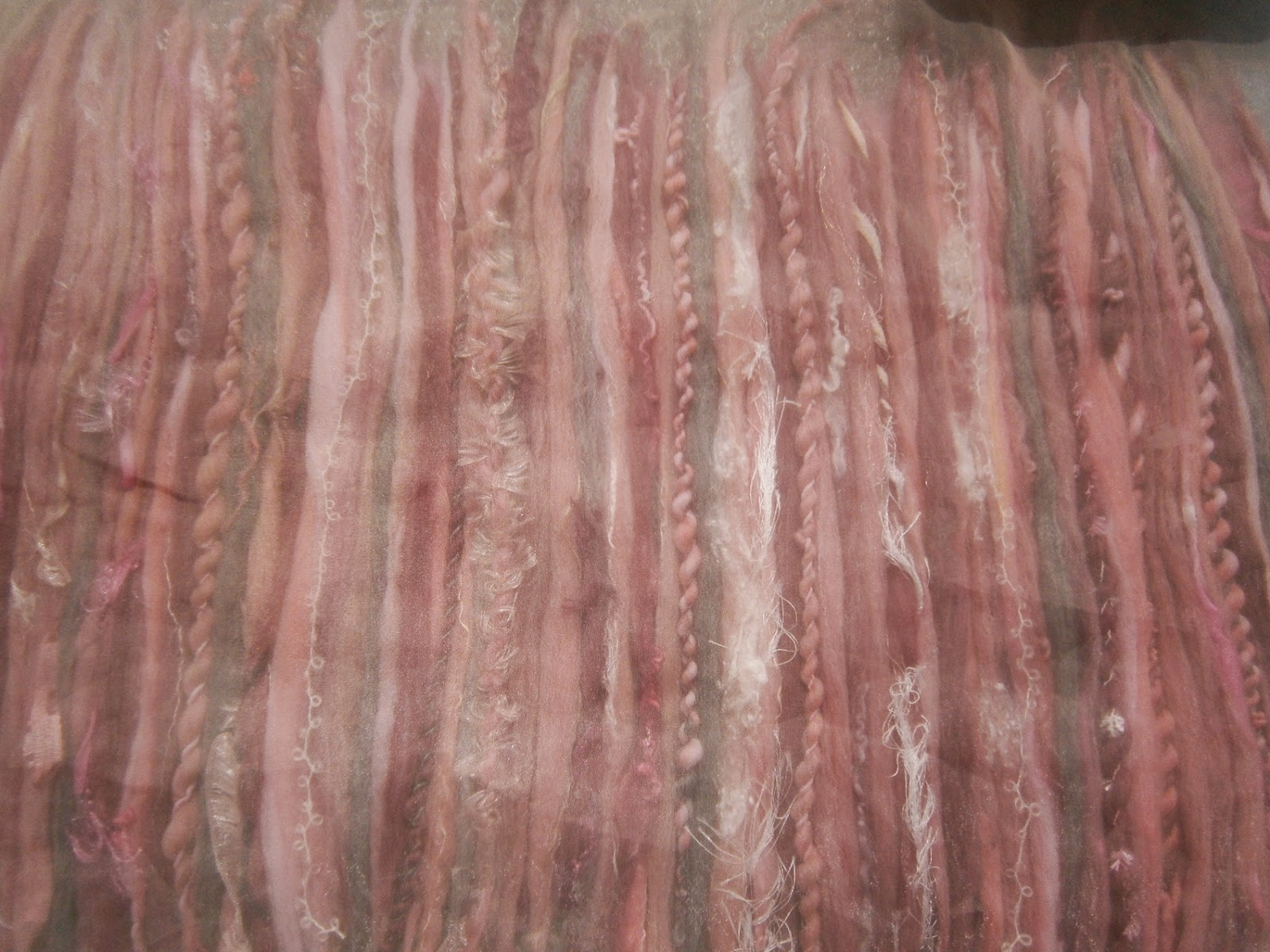 And a peek under the netting: 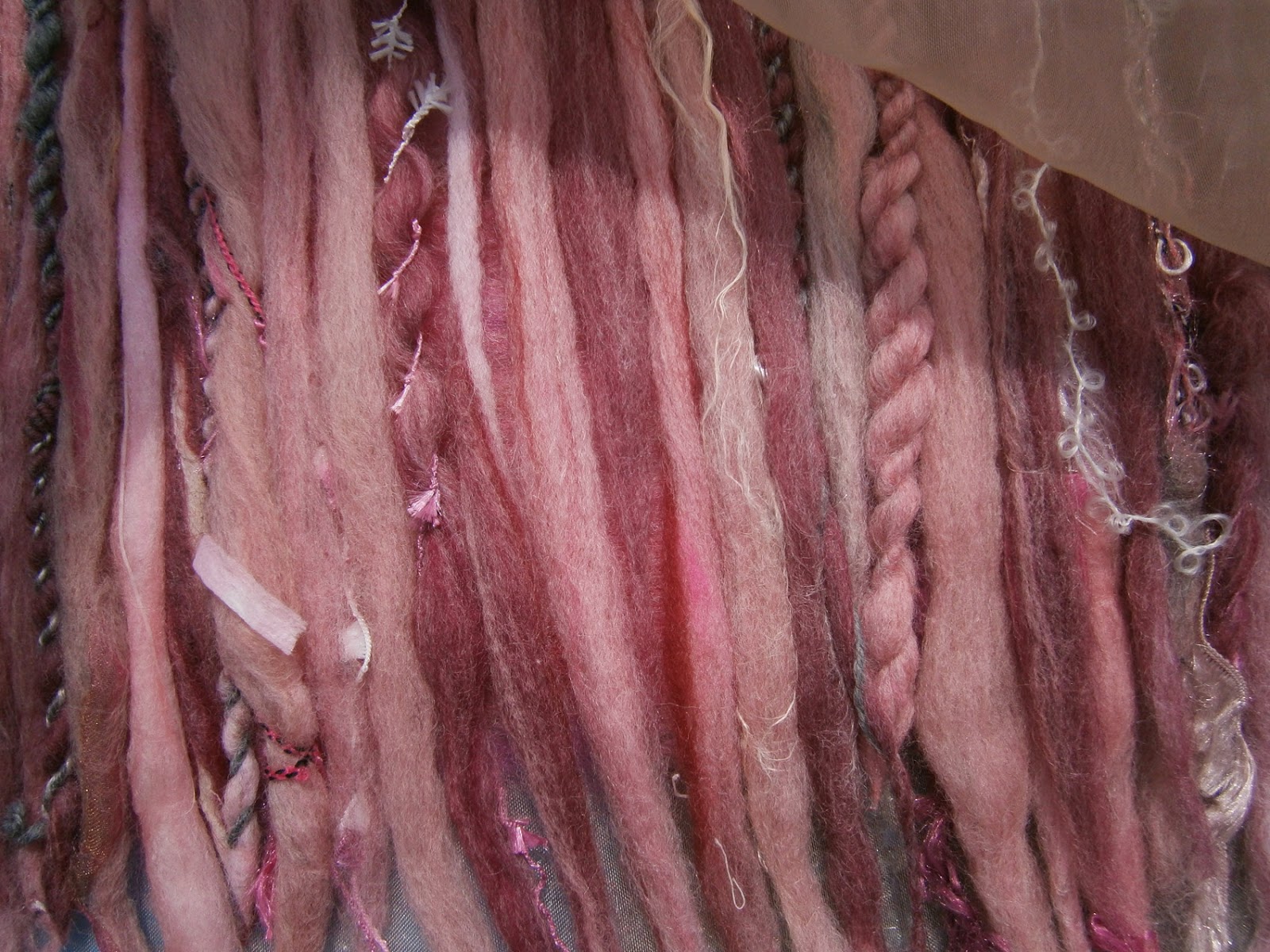 It didn't take as long as I thought it might for it to felt, probably because it took so long to make sure it was all thoroughly wetted! This is when it was all wet down and starting to felt. 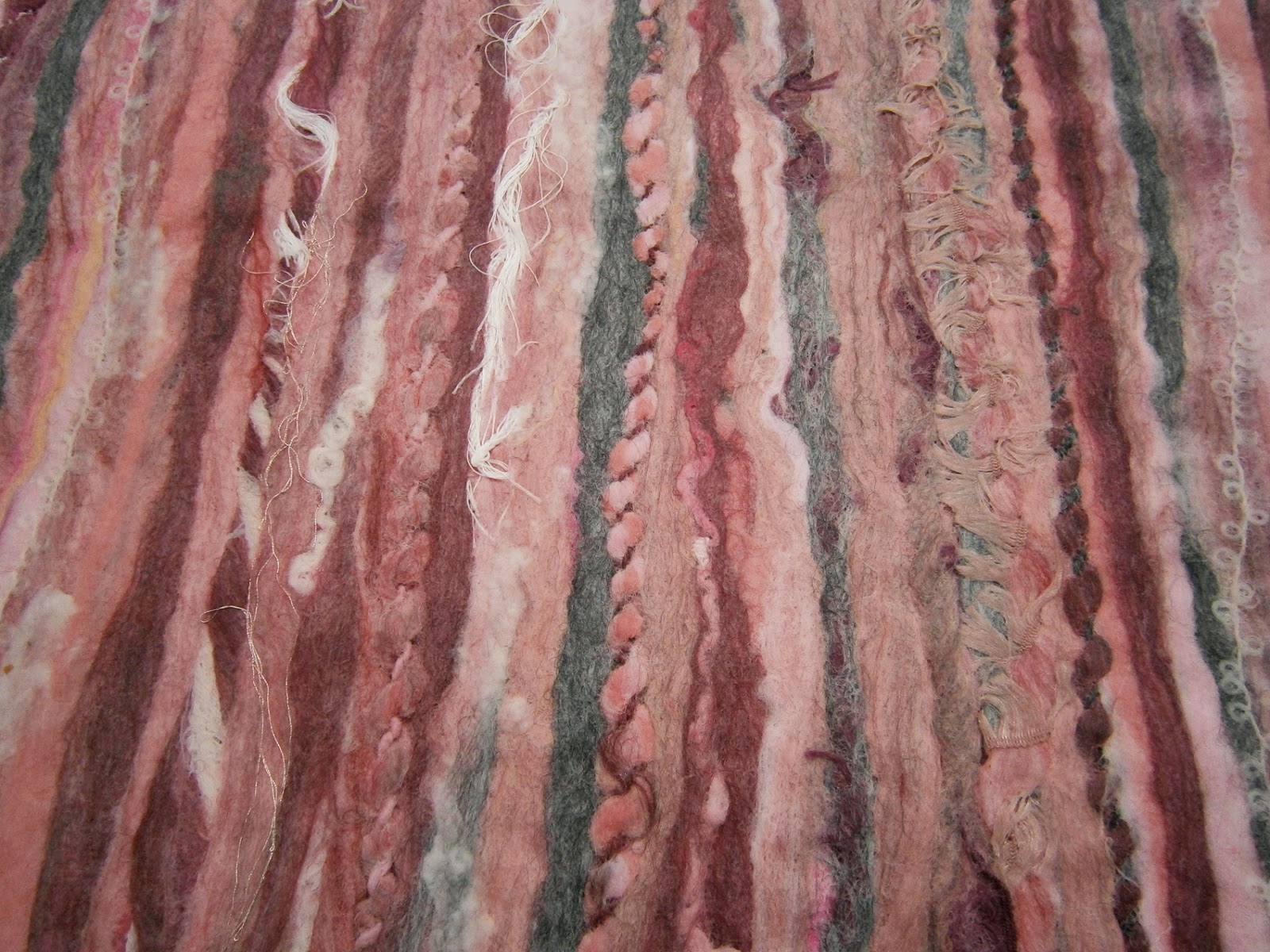 And this is the finished piece: 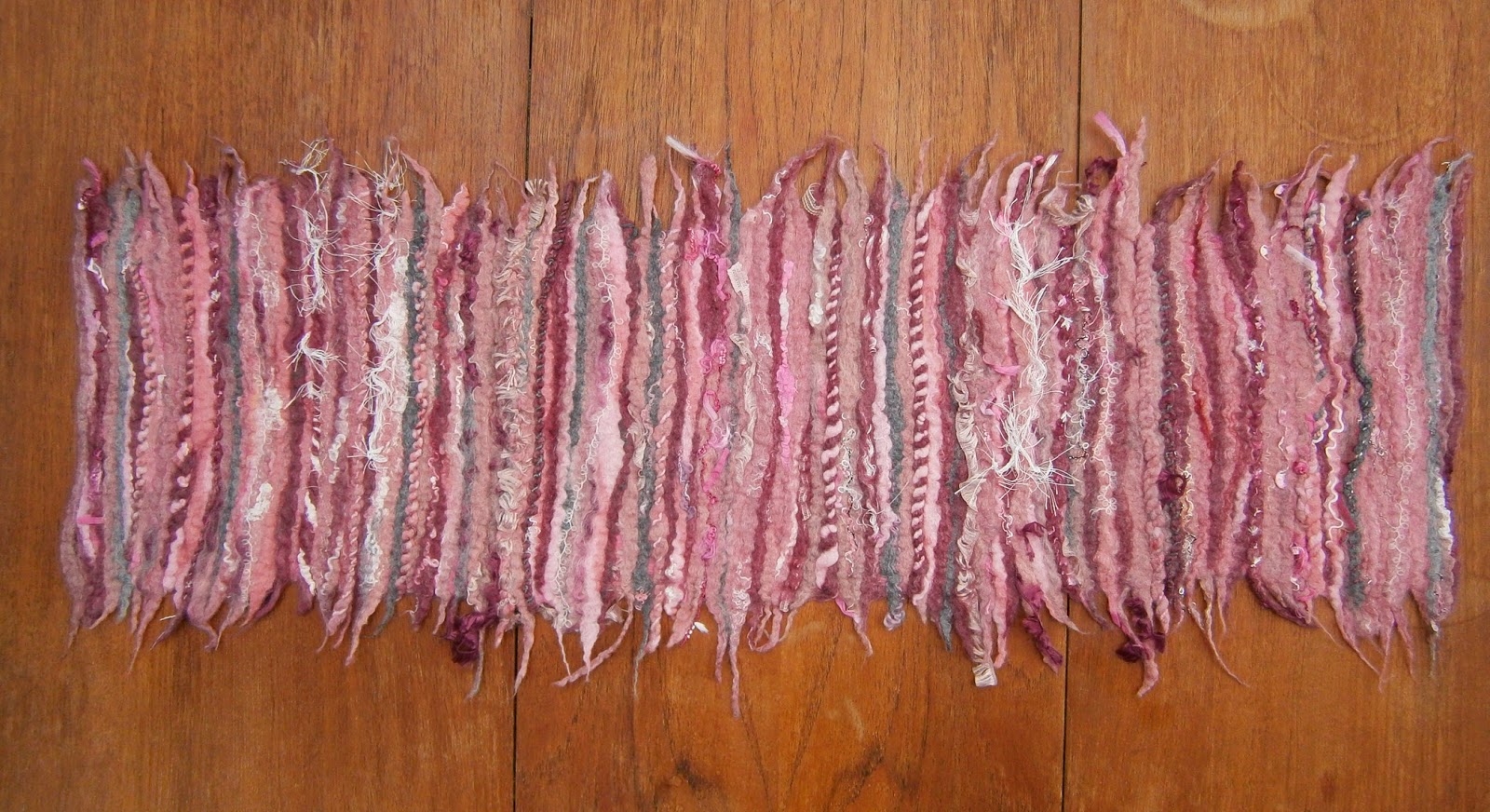 I knew as soon as it was dried that my mum would want it as some kind of rug/mat and the first thing she said was 'Oh, this is going on top of my drawers, it'll be perfect.' Some of the yarns I made were by plying handspun merino with commercial yarns, but mostly I just plied half thick, half thin merino together. Closer view of the middle: 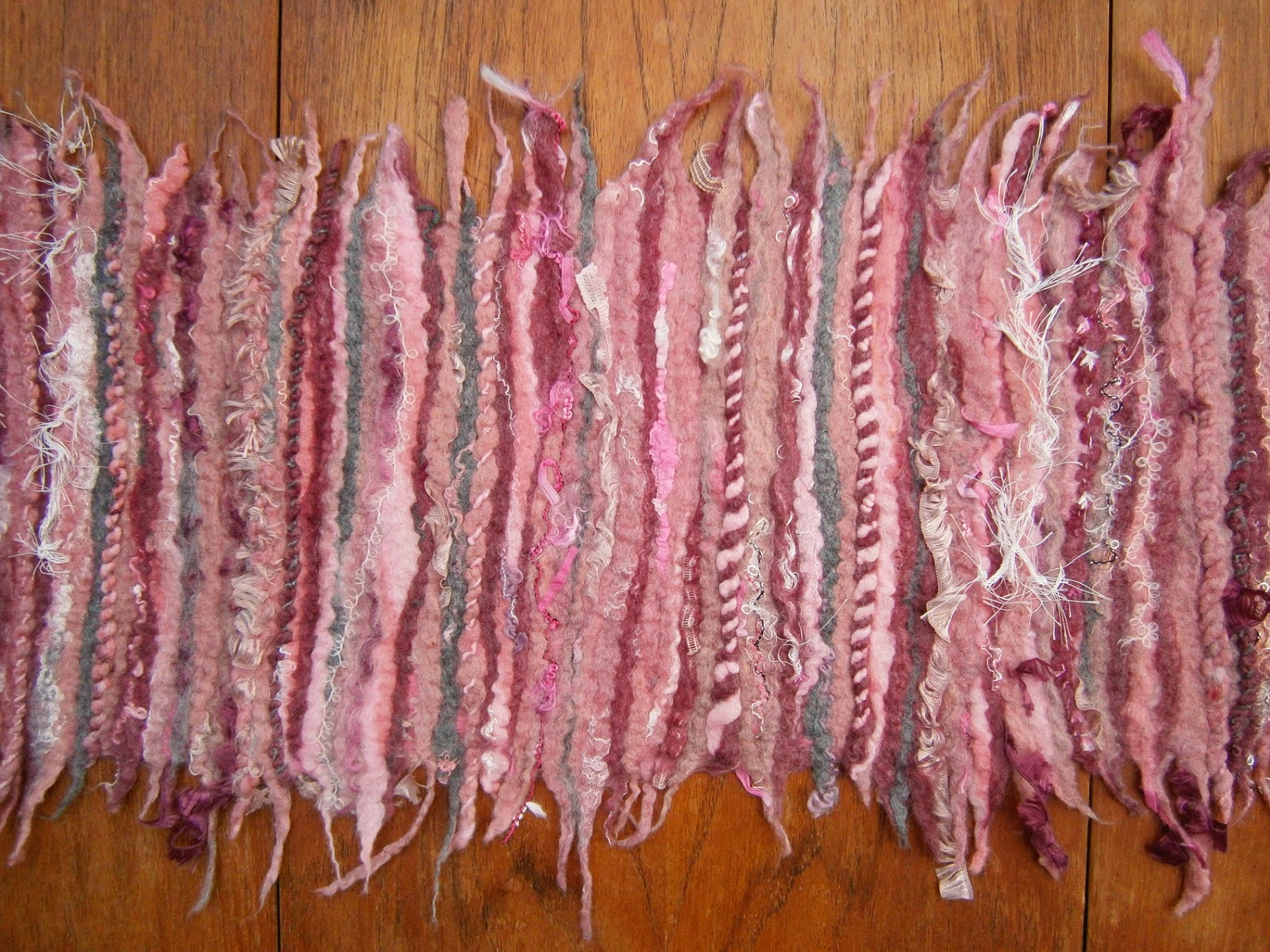 Here are some commercial boucle yarns, one twisted in on the left and the one I laid on top is mohair from Marilyn, I think. There are a couple of my yarns in there too: 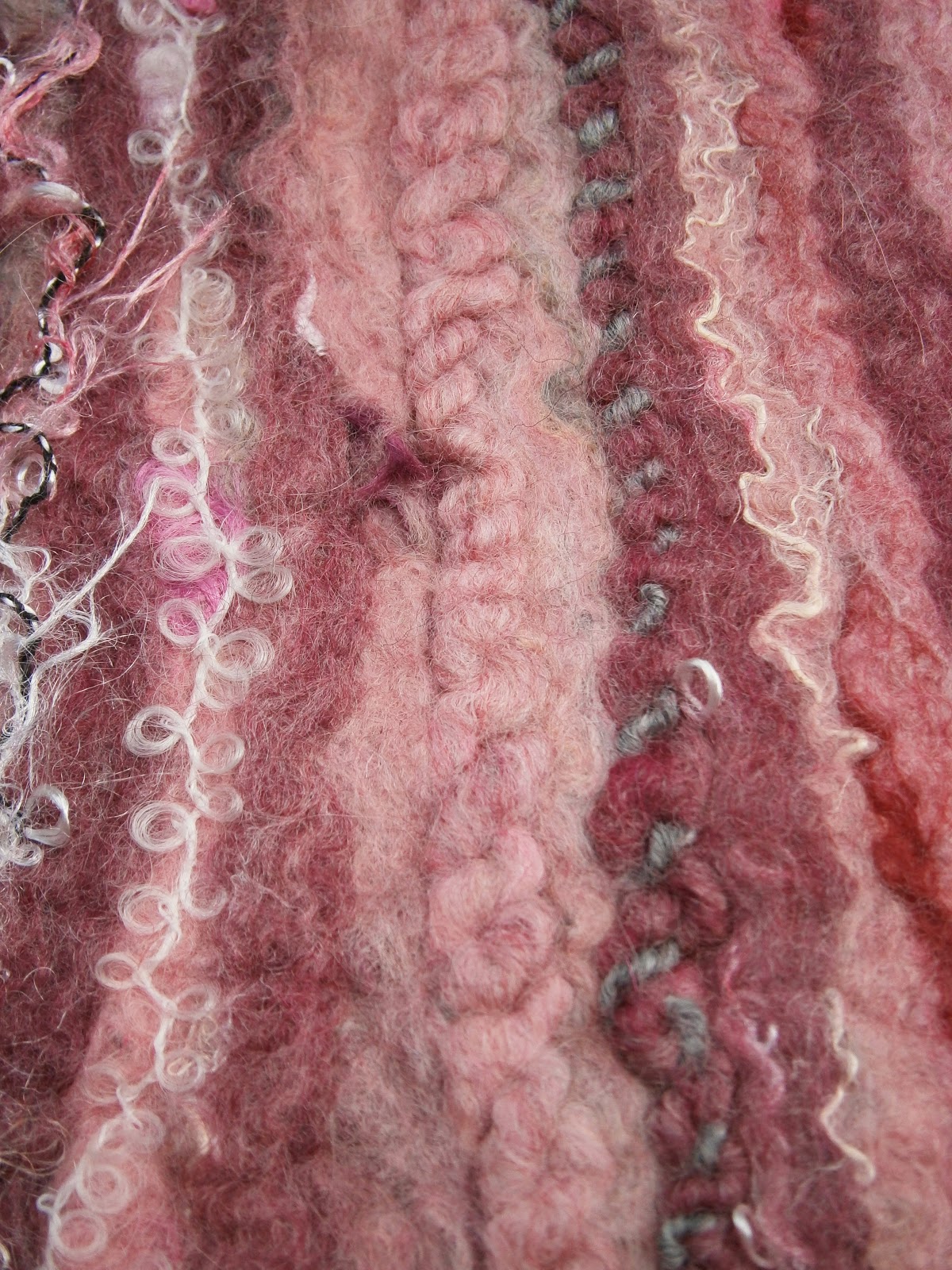 I'd forgotten I used some organza and cotton gauze in the twists too, you can just see a bit of organza here: 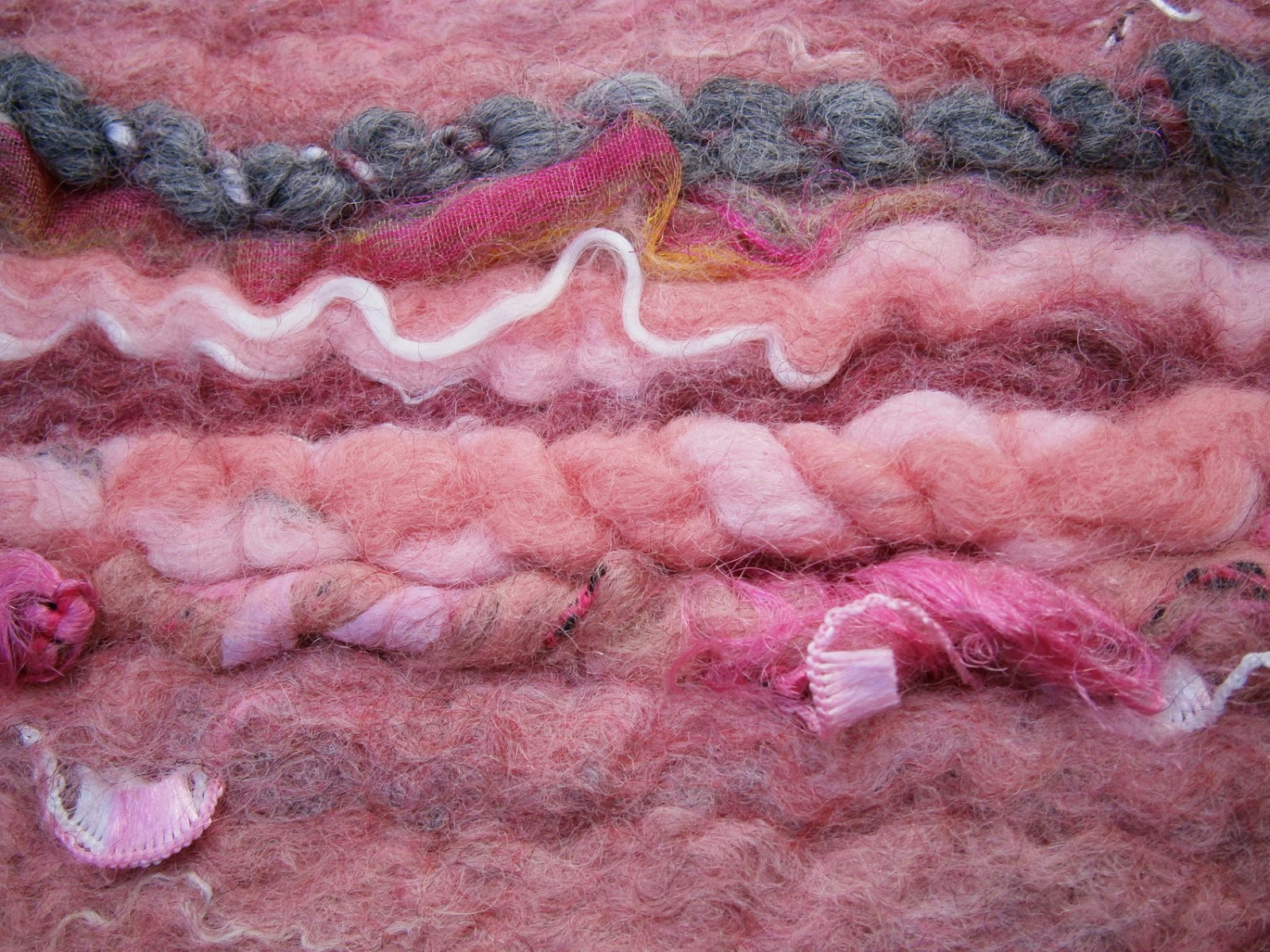 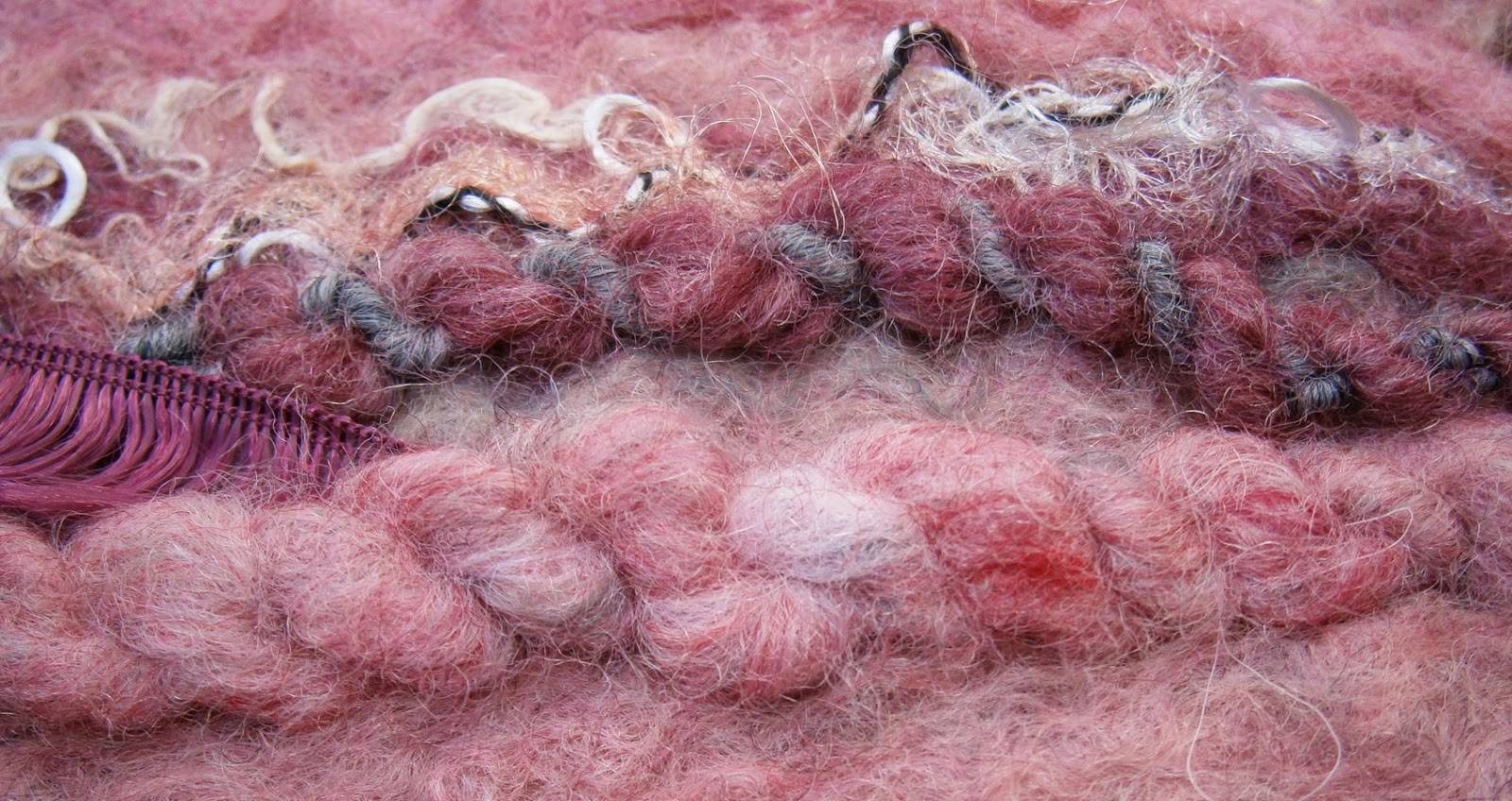 I thought a bit of colour might make a change from all the natural wools and fibres this week :)