I mentioned recently that I'm doing a Craft Fair soon. It's this coming Sunday at Victoria Baths on Hathersage Road in Manchester. They also do guided tours that day, so if you're interested, have a look at their website.
In my post last time, I showed a faintly plaid felt piece which I'd started to make into a diary cover. Here is the finished cover: 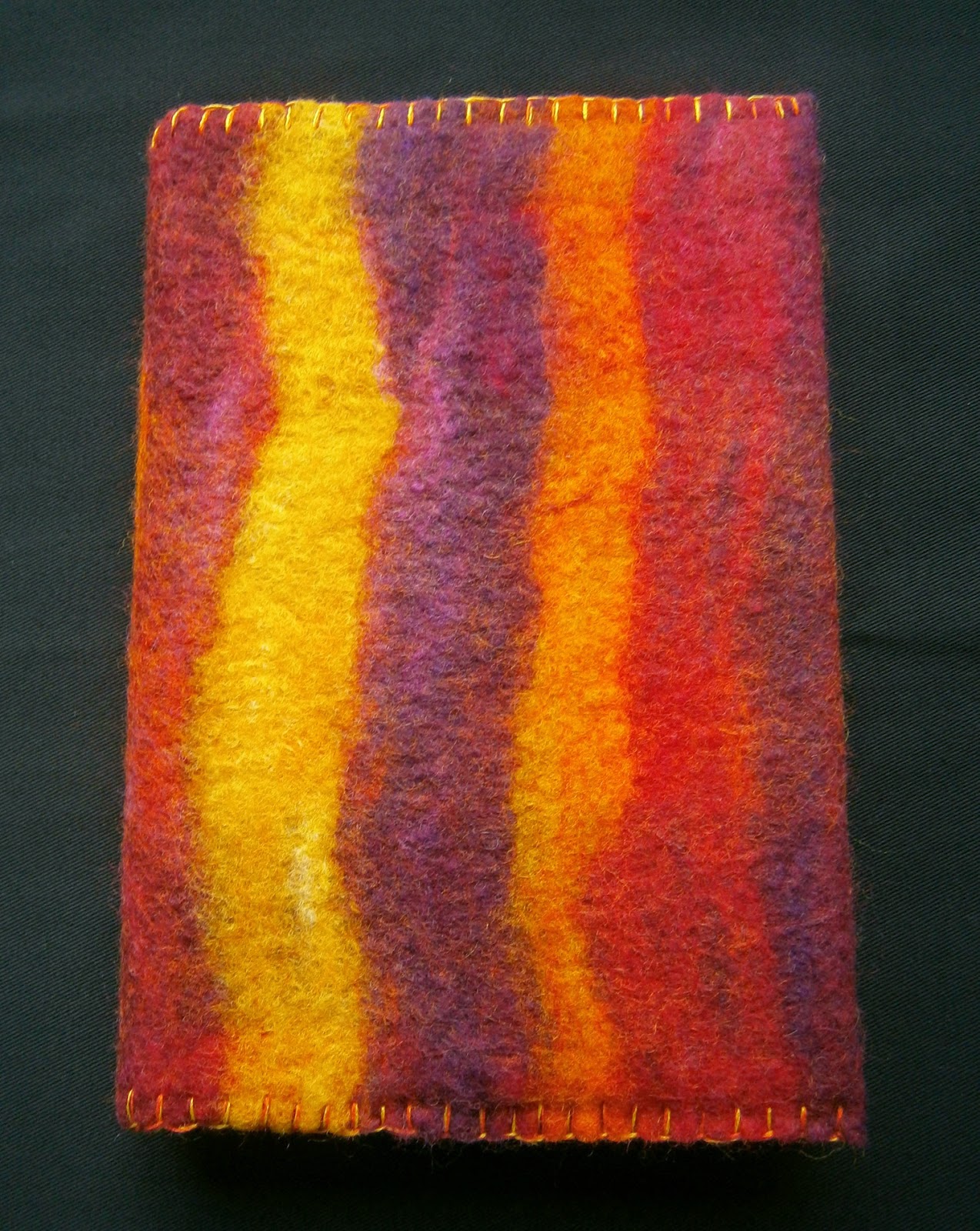 I also mentioned a piece of silk I got for £3 a metre. I did manage to use it on a felt piece, but i haven't made it into a cover yet. It looked a bit nicer and brighter just before the final fulling, but I wanted to make sure it would stand up to years of handling: 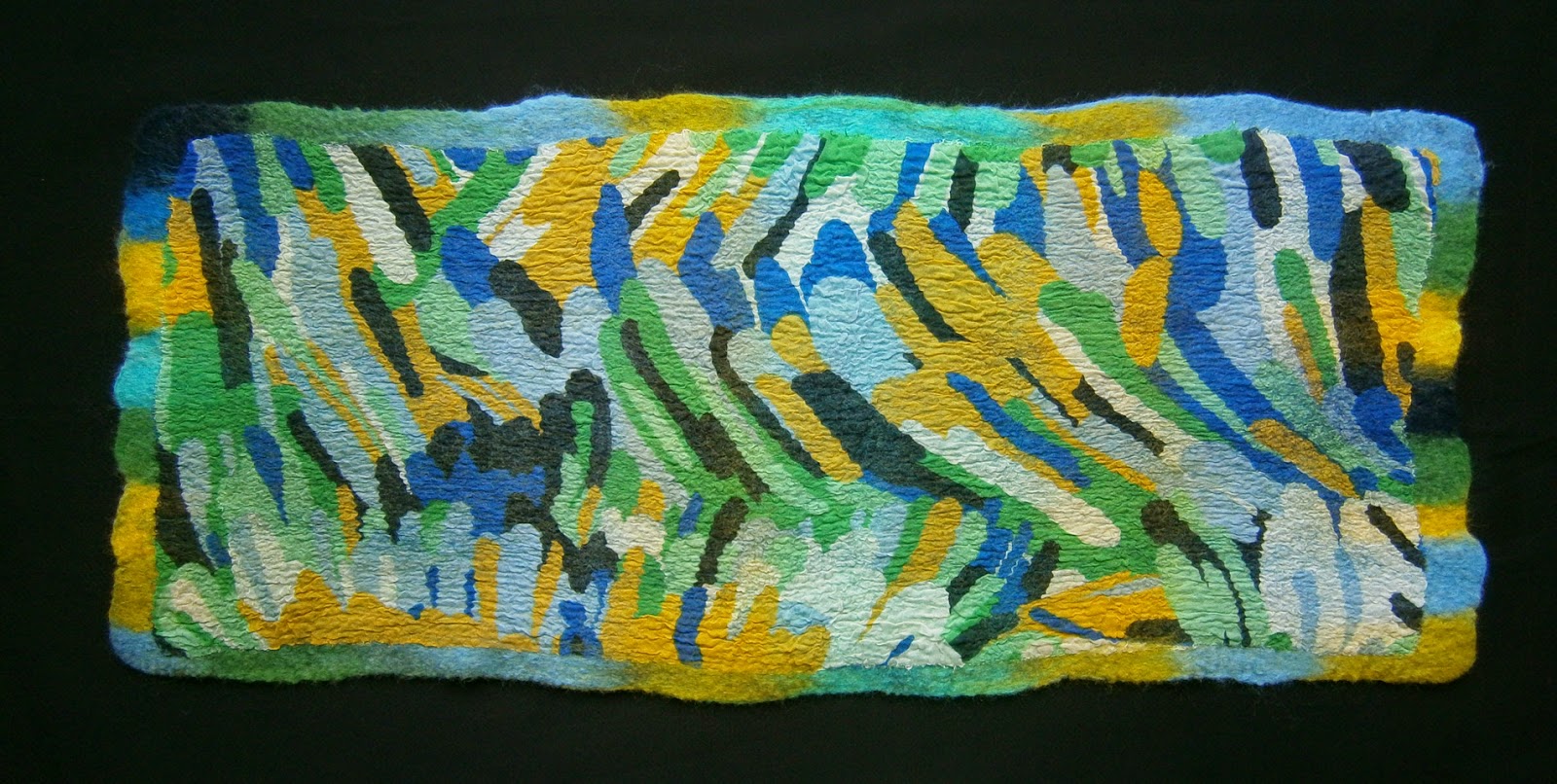 I don't know if you remember a couple of pictures I posted as part of the Felting and Fiber Studio site's Jackson Pollock challenge from a bag I was working on, well, I never did get around to finishing the bag, and when I saw it recently, I thought I could cut it up and turn it into a nice sturdy diary cover. So, I did :)  This is the front: 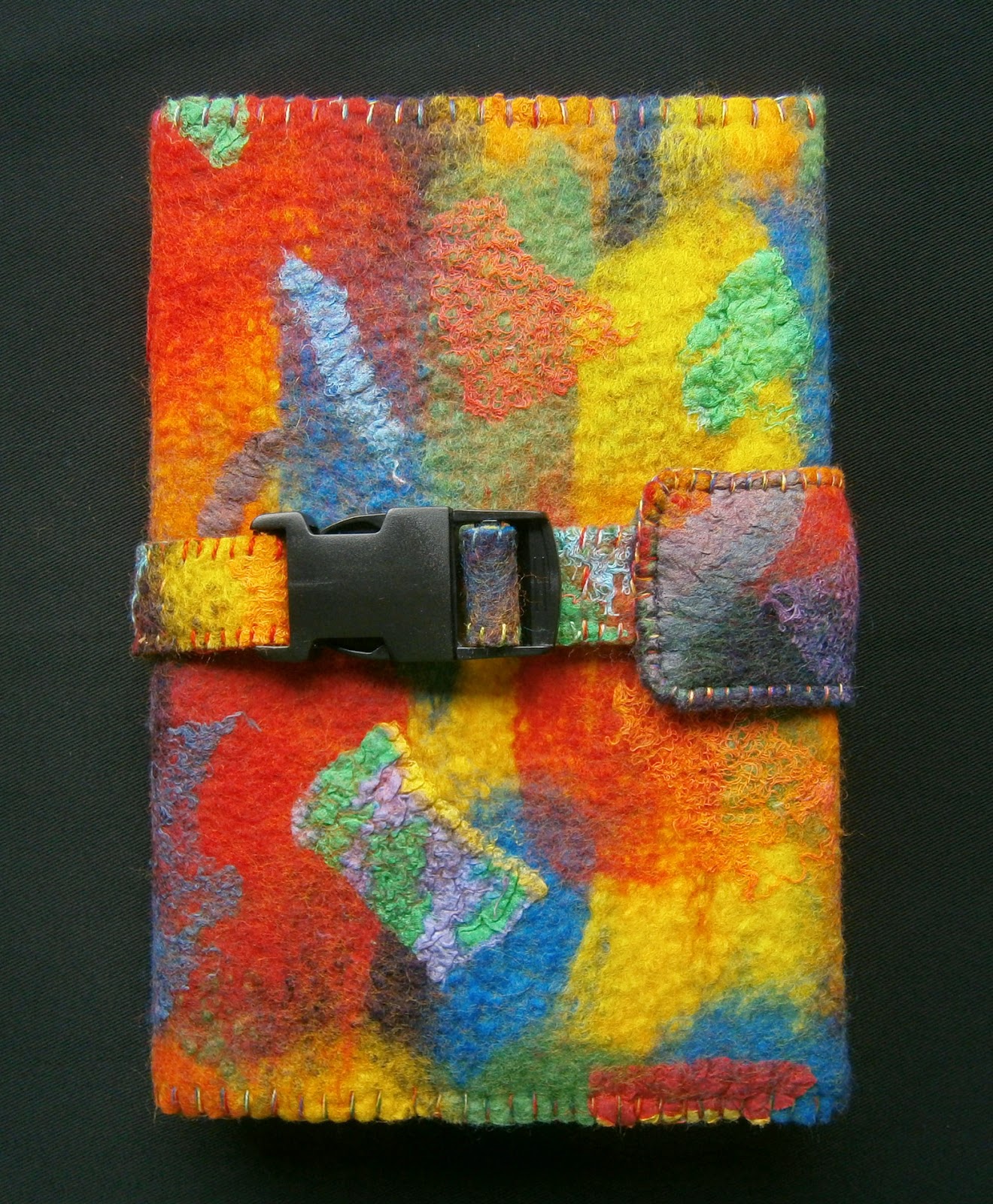 And, this is the back: 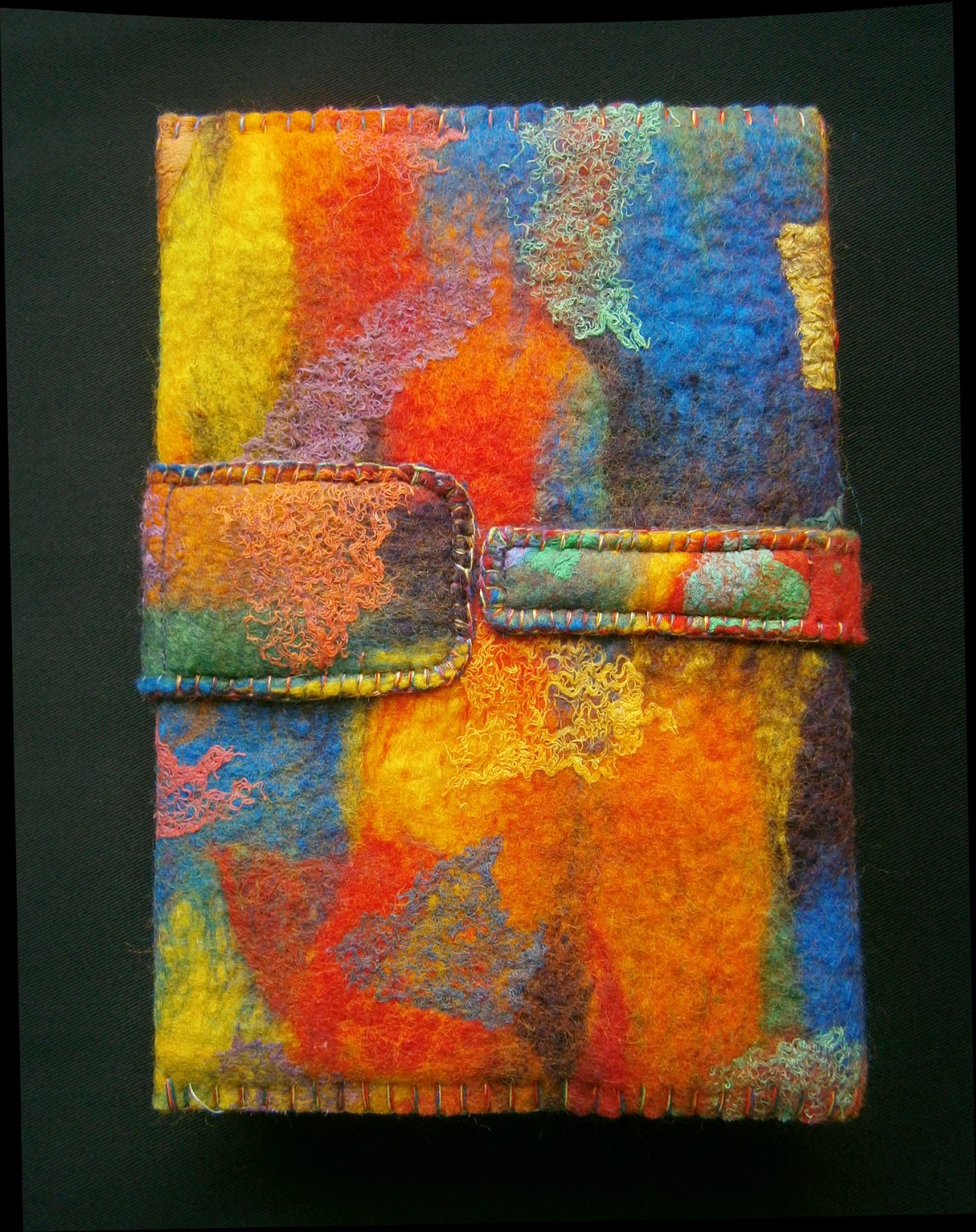 I always forget just how long it takes to do those covers! Also, because I didn't have any coloured threads which I thought would be just right, I 'blended' my own. I took a strand each of Red, Orange, Yellow, Green, Blue and Violet embroidery floss and made a 6 strand rainbow. I had to do that for each part I stitched, and I was starting to regret it by the end :)

One of the things I wondered after the last fair was whether it was obvious that my stuff was actually handmade felt made from real wool. A lot of my stuff is well felted or nuno felt, so to anyone who doesn't know felt, it could just be commercial fabric I've bought. So I thought I would make some obviously wool natural pieces for book covers. They are made from lots of different breeds of wool and embellished with locks, some mohair boucle from Marilyn, some silk noil, and viscose and bamboo. This one has the most added embellishments: 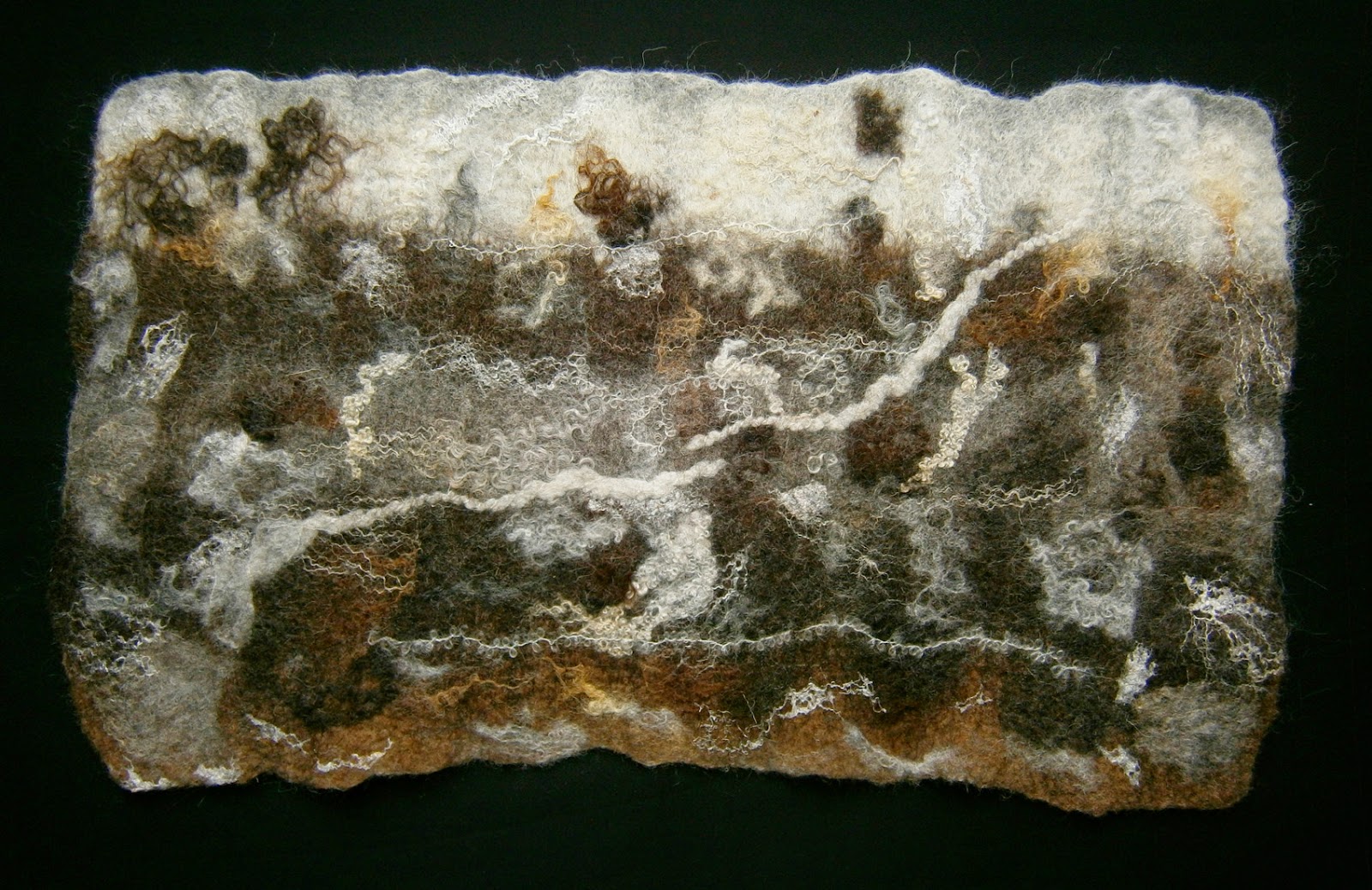 I did actually use the same size template for these pieces, but with all the different wools and embellishments there was different shrinkage. For this piece, I tried to stick to wools which were more similar: Merino, Bluefaced Leicester, Finn and Corriedale, and there are less embellishments:

If I get chance before the fair, I'll upload the finished covers to ipernity or the forum.http://feltandfiberstudio.proboards.com/