I've been dyeing some cellulose fibres recently for taking to the MakeFest at the Science and Industry Museum in Manchester. I'm getting the hang of it now, but I don't think my first lot of fibres turned out as nice as I'd like. I did some Viscose fibre recently, and this turned out really nice. These are some of the reds, oranges and yellows: 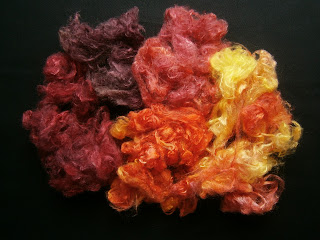 And some yellows, greens, blues and purples: 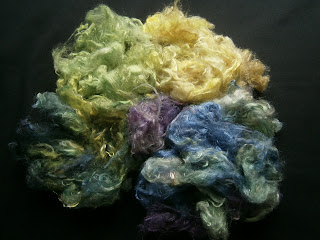 I don't like the way dyeing cellulose fibres wastes so much water with the rinsing, but it is easier for me to do large amounts than it is with acid dyes, not that I had much choice, even mixing up just 500ml each of red, yellow, blue and black was more than enough to dye about 200g of fibre and I had to look for other things to dye so as not to waste it :) I tried dyeing Kapok fibre too, that stuff is practically impossible to wet, it seems to form a 'skin' around itself, so dyeing gave some interesting results as it behaved the same way, and when the fibre was separated, the centre wasn't dyed. This is some rose and lilac coloured kapok: 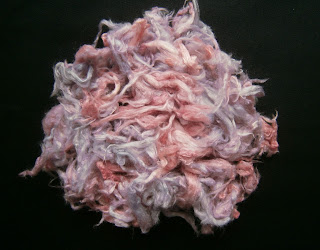 I've mostly stuck to dyeing staple fibres. I also had bamboo staple fibre. These are the greens, blues, purples, silver and black shades I dyed: 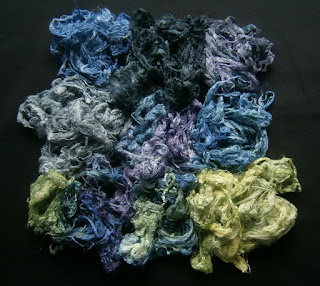 And here are the yellows, browns and reds bamboo staple: 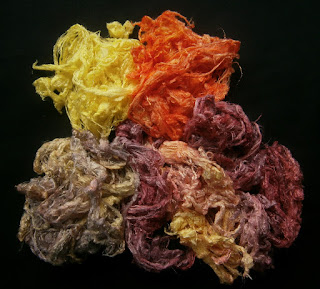 I tried out some tops of rose fibre, the photos didn't come out, but the tops dyed well so I dyed some bamboo top: 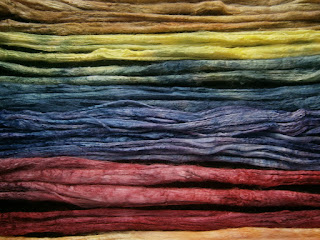 They came out really nice, so I used up the last of the blue and purple dyes on some viscose top: 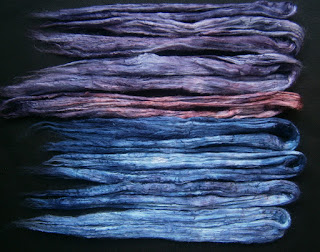 And since I'd already made a mess in the kitchen and hadn't got around to putting the table/equipment away, I started dyeing with acid dyes. Only these silk carrier rods were dry enough to photograph: 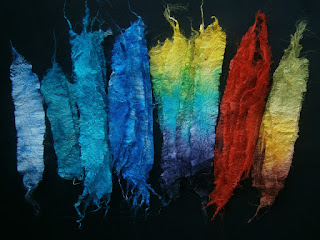 I'm not going to dye all the fibres I'm taking, I wanted the fibres to be easily recognisable as the same as the samples they have in the Textiles Gallery, showing where fibres come from and the fabric they're made into, but I wanted to show/offer dyed samples too.
Posted by Zed at 12:37