I stumbled across an entry recently on fibrefrolics' blog, about a really easy technique for making textured felt, using only sewing and the washing machine. I love textured felt and experimenting, and any technique that eliminates rubbing and rolling sounds good to me, so I had to give it a go :)

I only had a white wash planned, so I layed out a piece with all white fibres. I used layers of natural merino tops, English 56's and combed lambswool. Extra fibres on the top were Bamboo top and washed Bluefaced Leicester, all from World of Wool. The top layer was Polwarth and there was also some Angora locks added to the top, both from Karen's Felt Works. I also added some Alpaca and Kid Mohair.
This is what it looked like after sewing, before I put it in the washing machine: 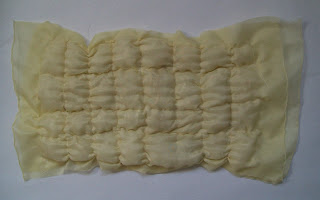 And, this is what it looked like when it was almost dry: 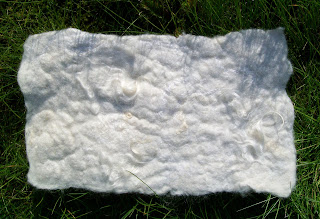 There are a few more photos on my flickr photostream including photos of it just after washing and a close up.

If anyone's ever wondered whether commercial pre-felt is worth buying, I also have some photos on flickr of a few practice samples of that-a couple of different thicknesses and how it works for nuno felting.