It took me a while, but I finally finished the two purses I was working on made from felt with nuno felted strips of cotton gauze. I don't like doing buttonholes, they're so small and fiddly, so I put off doing them. I could practise with the sewing machine, I suppose, but I think I'd just make a mess of it :)  I can't remember now which was the one I first started working on, but this is the first one I finished: 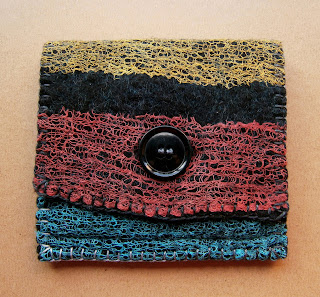 Where possible, I kept the natural edges of the felt. I'm sure to some people this makes it look 'wonky', but I prefer 'unique' :) I bought quite a few new embroidery threads recently, so I had lots of colours to pick the right ones for sewing the different parts. 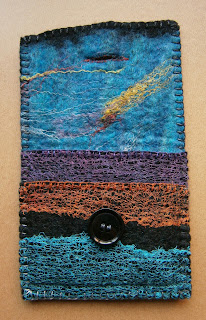 It actually turned out a lot bigger than I thought, and my chunky camera fits into it! Plenty of room for lots of cash ;) 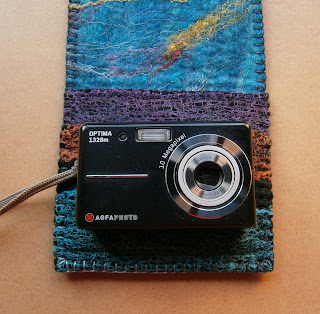 This is the second one I finished. It's slightly smaller than the first one, but still my slimmer camera fits in easily. They both look very similar to each other, the biggest difference being the natural edge on the flaps. This is the back, with the flap open: 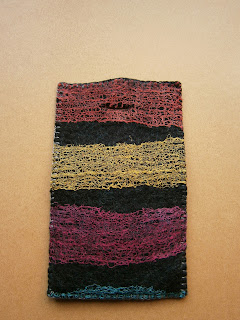 As much as I always want to keep everything I make, I often find it hard to use things I make. It sounds silly, but I hate to 'waste' things, it's that same kind of feeling you get when you have a nice new notebook or journal, and don't want to spoil it by scratchy handwriting and wonky sketches. So, rather than stockpiling things 'too nice to use' in a box, I'm going to put them on etsy. The first thing I listed was a shoulder bag I finished earlier this year: 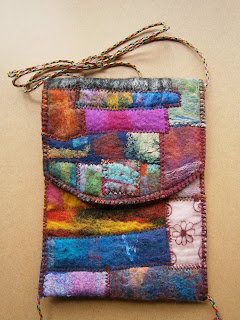 I made it using spare pieces of felt and offcuts that I saved, and a gorgeous piece of fabric to line the inside flap. It's a flat 'passport' style bag and fits a camera and coin purse comfortably. 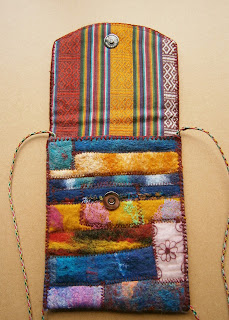 I keep being told I shouldn't feel embarrassed or awkward about self-promotion, so if you're interested in either of the purses, the bag or maybe you were thinking of buying a handmade notebook cover or camera case, please visit my etsy store :)  The bag is already listed and once I've measured the purses and weighed them for postage, I'll add those too.
And if you don't see exactly what you want, I'm happy to take commissions for custom orders :)